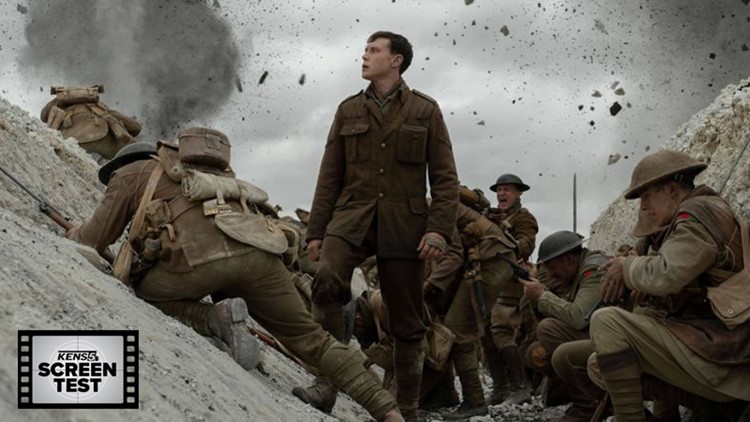 '1917' Review: Sam Mendes's technically triumphant war film can get in its own way

For a film that eventually gets around to showing the grim and gory fallout of war in often-exemplary audiovisual fashion, Sam Mendes’s “1917” opens with a peaceful image: Soft wind caressing a field of flowers against an unbroken blue sky, two young men peacefully dozing away.

A tip for the viewer: Bask in these early moments as much as you can, as quick as you can. It isn’t long before a military commander wakes the two British soldiers, Blake and Schofield. In short order, we learn their mission: To travel some miles away to the frontlines and warn the commander that hundreds are about to waltz into a trap. At stake: 1,600 lives, including Blake's brother. But the details of this mission, or the two corporals undertaking it (Dean-Charles Chapman and George McKay, grimy and bloody and dread-stricken), never feel as important as how we see it unfold on the screen—via the illusion of a single unbroken shot, with the camera rarely blinking as Blake and Schofield creep, run and trudge through the carnage of World War I Europe.

The presumption is that Mendes and his camera’s conductor – Roger Deakins, more magician than man – are on their own mission to make as immersive an entry as the genre has ever seen, to make the viewer feel the rattling stress of second-to-second unpredictability to the same chaotic levels as those on the screen, and to burden us with the same preciously scarce moments of reprieve. You might recall “Dunkirk,” Christopher Nolan’s frenetic, claustrophobic war offering that is a technical wonder in its own ways, and a movie which “1917” will unjustly be compared to.

The degree to which Mendes and Deakins succeed or fail will depend on what kind of fulfillment you seek from the cinema, and there’s no watching “1917” without doing some self-examination in that regard. There are some legitimately stunning sequences as the two conspire to remind audiences that big-screen experiences can still border on the immaculate in the age of streaming, so long as – in this instance – you’re not searching for a story of complex human characterization or the toll of war on the everyday folk plunged into it. Thematically, there’s little in “1917” that surprises, and even less that lingers in the mind after the credits roll in two hours’ time and we find our breath once again.

The irony is that the ostensible continuous-take bravura – the thing that preempts any and all discussion of “1917” – isn’t what props up the film when it’s at its best; I’d wager it actually hinders “1917” from becoming something greater than it is. This narratively-scant movie is at its most sensational (and thus most satisfying) when Deakins’s incomparable eye is functioning in marriage with the soundscape. Thomas Newman’s urgent, Oscar-worthy score and some excellent sound design work are unsung heroes, and often do the heavy-lifting when the visual gimmick veers dangerously close to purposelessness.

Careful attention is paid to when the music cuts out and fades in, swells up and powers down, and a strikingly somber rendition of “Poor Wayfaring Stranger” at a crucial juncture holds more emotional impact than 120 minutes of a stalking camera, no matter how well-executed the visual magic is. What’s more, these sonic gymnastics are more admirable a technical effort (or at least a more productive one) when the one-shot trick is betrayed by jarring shifts in geography. Forests and towns often conveniently seem to appear out of nowhere as if we had instantaneously jumped through space and time; in these moments, it feels like “1917” is asking us not to fret too much about where Blake and Schofield are in relation to their destination. Isn’t the gimmick supposed to do the opposite, to enhance and make coherent the physical scope of their mission?

The unorthodox experiment of shooting a war movie in what appears to be a pair of continuous takes – something I can only imagine as the filmmaking equivalent of throwing a bucket of toothpicks in the air and catching each one before it hits the ground – was perhaps inevitable at the end of a half-decade that saw Alejandro Iñárritu apply the feature-length trick to his much-smaller-in-scope (and Best Picture-winning) “Birdman,” and two years after the aforementioned “Dunkirk” (Nolan’s film isn’t told in a single shot, but similarly prioritized precisely-executed aesthetic chaos over story).

RELATED: The 25 best movies of the decade

The continuous take as a technique of visual daredevilry isn’t new, but the audacious scope to which Mendes and Deakins apply it in “1917” is. So it’s another bit of irony that the endeavor’s most successful ripple effects play out not on long stretches of following Chapman and McKay through bunkers and scorched earth, but rather on their shifting demeanors and faces. “1917” being what it is, we're provided a rare amount of unflinching access to its lead performers, especially in the first hour, and the two young actors are sufficiently believable at manifesting conflicting feelings of terror and anticipation with the personal stakes of saving your brother, and helping your companion to do so.

But “1917” isn’t a war movie with something to say about war—if it does have one, it’s buried much too far underneath the technical wizardry and set pieces involving Blake and Schofield, who are only as fleshed out as the viewer’s application of genre clichés allow them to be. You can trick yourself into empathizing with these soldiers and what they go through, but I was barely able to recall their names once the credits rolled, let alone invest in whatever internal relationship they have to what they’re journeying to and what they are running away from. I can remember exactly one scene in which “1917” seems explicitly interested in delving into what compulsivity leads us to do in the chaos of war, when our two heroes decide to assist an enemy pilot after he’s been shot down. The rest is beautifully-shot white noise, and the occasional nagging feeling that Mendes might be much better served if “1917” was traditionally executed with the camera only occasionally lingering on the evolving motivations playing out on his actors’ faces.

But Deakins is still being Deakins here. And, the largely-unimportant continuous-shot distraction notwithstanding, the storied cinematographer finds opportunity to show off his skills in the movie’s quieter moments. Several shots in “1917” – a demolished town briefly rebirthed in the ghostly flashes of a flare at nighttime, Schofield frantically climbing a mound of dead bodies to escape a river, a silhouette against a burning church – are destined to become canonized among the best of Deakins’s 80-movie career. It’s not a coincidence that they come in the movie’s best scenes, and don’t rely on the continuous-take trick to exhilarate. No one finds tranquility in horror like he does, nor can mine anticipation in the religious stillness of solitude.

It’s even better that there’s a cinematographer of his talents to realize the decrepit landscapes of war-torn Europe, perhaps the most consistent source of engagement. Very few war movies limit its setting to places where the battle seems to have passed long ago, and in “1917” the land is broken and cratered, peppered with bodies of soldiers we never meet alive and of destroyed tanks long past their capability to destroy, now half-buried as relics of mankind’s cruelest endeavors.

The “post-war” feel of “1917” extends to the screenplay’s morbid sense of humor (“Nothing like a scrap of ribbon to cheer up a widow”) as soldiers wonder out loud if acres of farmland and the occasional small town were worth fighting and losing comrades over. Indeed, while it’s a cliché to say it, the setting really is its own character here—much more of a character than our two corporals, at least. By mission and movie's end, you feel more connected to the land our soldiers are fighting over than the soldiers themselves.

The question to ponder: Do movies lose substance when mimicking an experience most of us can only tangentially relate to more than relating a story, as “1917” does by leaps and bounds? And is history done any favors by it, either? There’s little denying that there is ambition; the premise alone is enough to lock it down for several Academy Awards nominations come next week. But the immense reliance on technical innovation here suffocates human resonance; a few months after Martin Scorsese called superhero movies theme park rides, “1917” proves to be unapologetically that. It’s spiced with moments of visual wonder, but wonder can only engage us so far in a genre often defined by what people turn into after emerging from the human-made hell of raining artillery, trench warfare and split-second life-or-death decision-making.

There’s much to appreciate in the artistry and craft that went into making “1917” a reality—and I do. But I think I’d more deeply love watching a documentary showing how the hell Mendes and Deakins pulled it off. I can only imagine they would consider that a success to their experiment. To a lesser extent, I suppose I do too.

"1917" is rated R for violence, some disturbing images and language