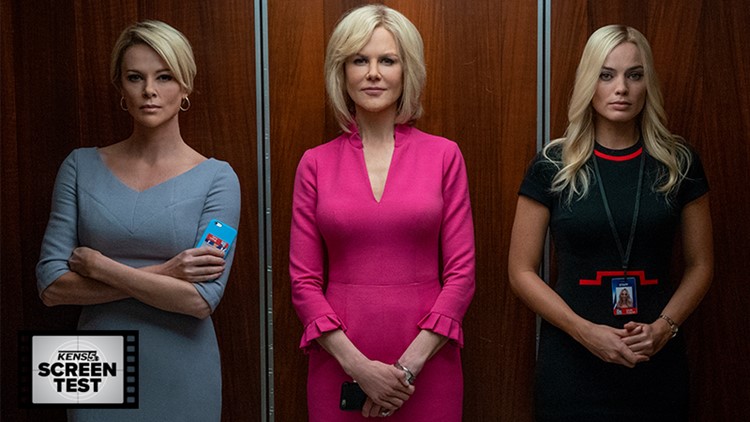 SAN ANTONIO — In the three years since Donald Trump’s stunner of an election victory, we’ve had some movies produced in response, whether explicitly or implicitly, to what was perhaps the monumental American moment of the 2010s, a decade that saw rage spilling from online forums into the streets, and to the multiplex as well. Spike Lee’s “BlackKklansmen” tackled the cyclical nature of history’s ugliest chapters, ending with a coda of condemnation. The truths simmering under the tensions of Jordan Peele’s “Get Out” were just as undeniably relevant. And there’s a reason Bong Joon-ho’s rage-against-the-system thriller “Parasite” is resonating with American audiences this fall more than any of the Korean director’s previous works.

Now we have Jay Roach’s “Bombshell,” a peek behind the cameras of a toxic Fox News newsroom in the days leading up to Roger Ailes’s luxurious ousting following allegations of sexual harassment. Trump isn’t just part of the world of “Bombshell”—he’s essential to the movie’s clear desire to be a story of the moment. Considering that the filmmaking process is typically a years-long one, as well as the fact that President Trump may not even last a full term, Roach’s gamble paid off.

"Bombshell" is the first film I can think of with chants of “No KKK, no fascist USA”; tweets from the president attacking everyone in sight fill the screen; and Roach uses actual footage from 2016’s election early and often, including a GOP debate when Fox personality Megyn Kelly (here played by Charlize Theron, completely transformed) targeted him for his attacks on women, inviting poisonous words. Later, in the offices of Ailes (John Lithgow), Kelly and her boss high-five their strategy. It made for excellent TV—what’s more important? The answer, as we later learn, might be the stuff that self-respect and integrity is made of. Whether those things can be found in Roach’s version of Fox News – “the nostalgia machine for lost America,” as Theron’s Kelly describes it, and where reality can be mistaken for hyperbole – is a whole other question.

Like the characters in his story (an ensemble that also includes Nicole Kidman as Fox host Gretchen Carlson and Margot Robbie’s Kayla, a fictional intern with big dreams functioning as audience surrogate to the wily world of national TV news), Roach’s movie is a series of tightropes to be navigated by the “Trumbo” and “Meet the Fockers” director. “Bombshell” is a movie that begins with Theron literally guiding us through the world of Fox News as Kelly – a primer before the impending nuclear detonations of A1 headlines – with a comic air of feigned moral superiority, despite working for a superior who bases the potential of prospective on-air personalities on how short their skirts are (“It’s a visual medium,” is Ailes's repeated excuse).

But the movie switches gears rather quickly – with the speed of a breaking news story, if you will – when Carlson decides to publicly sue her employer for unending on-air harassment, breaching her contract in the process. The film’s contours shape themselves into a true-as-nails story about womens’ ceaseless struggles in the workplace. Roach – a man – must now contend with very real and very much still-ongoing issues while zeroing on his real-life main characters – mostly women – whose ideologies he’s prodding with a snarky stick.

That narrative contradiction is clearly on the filmmaker’s mind. Over the course of its two hours, “Bombshell” sticks strictly to the facts – Carlson’s call to arms, Kelly’s eventual enlistment, Ailes’s resulting downfall – and aside from some early stylistic gags, it rarely steers into the territory of full-blown comedy. Roach, working off a script from “The Big Short” writer Charles Randolph, instead has something more meaningful on his mind, which means he has a quandary on his hands. As does the audience. How do we leverage empathy for figures the movie paints as unreliable symbols of right-wing elitism with the unflinching consequences of systemic abuse of power gone unchecked?

RELATED: Movies in the 2010s largely captured, and warned of, our moments of reckoning

RELATED: 'Marriage Story' Review: A complex portrait of love at the end, and one of the year's best movies

It may be too easy to say that Roach doesn’t. The more “Bombshell” goes on, the more he leans into humanization rather than humiliation, leaving it largely up to the individual viewer’s ideology to draw conclusions about the politically-inclined actions of characters in a story increasingly shedding its skin as a Fox News takedown to become something more universal, and urgent. The newsroom eventually no longer serves as the subject, but the setting. The irony is that the style of filmmaking applied by Roach eventually arrives at a place so fact-driven, so low-key in attitude that it can be difficult to ascertain where we are, scene to scene, in relation to the final message he’s trying to put out into the world. There’s no semblance of a climax in the movie, yet in a way the entire thing is a climax—a reckoning in an age when reckonings are the flavor of the socio-political era. Set in the infant days of #MeToo, “Bombshell” is a movie where victories are measured in isolated fist pumps; there’s no sense of paradigm-shifting triumph in the tradition of old-fashioned cinema.

Far be it from this male critic to suggest that’s an unintentional effect of a movie focusing its empathy on victimized women for whom systemic triumph is virtually impossible. An early scene that sees Ailes brazenly objectifying Kayla to deplorable levels is harrowing not just for what he makes her do, but for what's inferred that he’s capable of doing if she doesn’t. He has his predatory inclinations down to a routine, and the longer he stays in power, the more power he gains.

Roach manifests the unspoken understanding about the realities of this environment in ways that are appropriately subtle, and which may go completely unnoticed depending on the viewer’s perspective. Men stealing looks at women walking by; a woman shooting a knowing glance when the set becomes a stage for a women’s legs; mixed expressions of concern and disdain when someone gets off at floor two—where Ailes’s office is located. What happens behind the door doesn’t seem to be a secret; what’s actually worth wondering about is if anyone can put a stop to it.

What I observed watching “Bombshell” was a workplace steadily becoming a battleground where women are forced into taking sides, mostly against each other, because the man who makes it seem like he’s on the side of women he says he’s providing opportunity to is the same man who strips that agency away when he jumps for an unwanted kiss.

Theron’s Kelly may have leveraged so-called “loyalty” into her own show, but when someone whispers that her “silence is being noticed” late in the movie, the line reading transcends cartoonish villainy to evoke reality. We know how this history shakes out, but the story doesn’t end when Ailes gets $40 million from Rupert Murdoch to shuffle out of the limelight (he bought a Palm Beach mansion with the money weeks later). The story is still ongoing.

What most acutely resonated with me is how “Bombshell” paints power dynamics in a 21st-century workplace that should provide ample, and vital, food for thought for the male viewer. When Roach grants us access into the thoughts of a female reporter who knows her career is over after rejecting a male colleague’s unwanted (and unambiguous) advances, there’s a stab of familiarity. We already know what will become of her. It may be because of the moment we are living in, or it may be because we need to change how we act towards the women in our own lives—as “Bombshell” shows, in shades that Roach doesn’t allow us to mistake for idiosyncrasy, what often goes unsaid is what we must most open our ears to, and speak out against.

"Bombshell" releases in San Antonio theaters Friday, and is rated R for sexual material and language throughout