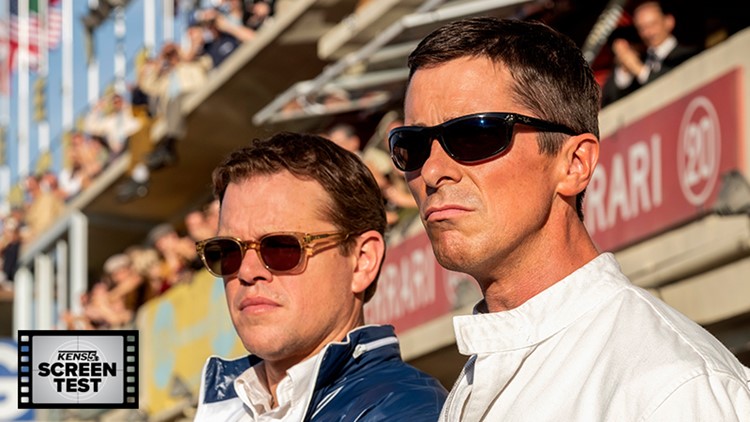 'Ford v Ferrari' Review: Racecar drama isn't quite as gripping in its story as it is thrilling on the track

The elegant bluntness of its title aside, the conflict fueling “Ford v Ferrari” – a sleekly-produced but vaguely-formulaic and overlong racetrack drama in the running for Best Picture at the Academy Awards – isn’t so much the one between two legendary auto companies duking it out at 200+ mph, but rather an intracontinental feud. The cozy offices of Detroit vs. the liberating, wide-open roads of the West.  Image vs. performance. White collar vs. blue collar. The movie shows how ambition of the portfolio and ambition of passion are two different things, though the route it takes to reach that conclusion is distractedly conventional.

A film that pays due attention to the aesthetic details of its pretty cars both in the showroom and on the track – as well as when they’re getting ripped to shreds in competitive mishaps – “Ford v Ferrari” fetishizes competition and white male provocation through the (mostly-accurate) lens of history. For his first directorial effort since the R-rated superhero western “Logan,” James Mangold goes exponentially safer in telling the story about how the Ford Motor Company reasserted its international dominance via the iconic 24 Hours of Le Mans race, a feat of endurance that may be on par with watching the more tedious segments of this 150-minute auto epic unfold—that the movie has a strange aversion to using on-screen graphics to inform the audience of the story’s timeline (it could have taken place in a span of a few weeks or a few years, as far as I’m concerned) does it no service in terms of comprehension.

Not that “Ford v Ferrari” is a particularly complex narrative, nor that its reliable leading men – Christian Bale and Matt Damon, in all their accent-heavy glory – don’t make the film feel a bit lighter on the track when they’re on the screen. They play Brit Ken Miles and Texan Carroll Shelby, respectively, the two grease monkeys conscripted by Henry Ford II (Tracy Letts, bringing the gravitas) to build a car fast enough to challenge Ferrari’s dominance in the Le Mans race after the Italian carmaker swindled Ford at the negotiating table. Money failed when the two companies met in suits and nicely-lit offices, and now Ford is hoping money can bring revenge on the racetrack, enlisting automaker (and Le Mans veteran) Shelby to “go to war.”

The newfound racing rivalry between Ford and Ferrari, however, feels tangential – and I think deliberately so – to the battle that sees Shelby and Miles facing off against the head honchos of Ford, who view Le Mans less as an opportunity for racing immortality and more as a marketing ploy to get young drivers excited about purchasing Ford vehicles once again. To live up to a legacy, you’ve sometimes got to create a new one, it seems. It’s an enticing (and relevant) bait-and-switch on the parts of Jez Butterworth, John-Henry Butterworth and Jason Keller, the committee of screenwriters behind “Ford v Ferrari”; the movie’s explorations of strained individual autonomy under the shadow of corporate agendas are clear-cut and explicitly stated by its characters, if not teetering close to sheepish obviousness.

But the screenplay largely undercuts itself by relegating those heady capitalistic themes to a grudge between Miles and Josh Lucas’s Leo Beebe—the movie leads us to believe a disposable bit of sparring between the two over the design of the new Ford Mustang is the impetus for antagonism that Beebe displays for the better part of the film’s massive runtime, and it simply doesn’t sustain itself. In the moment, the scene comes across as a fun punchline; the notion that it can be stretched out to bear the brunt of the movie’s conflict sputters out of gas fairly quickly. There’s some fun dialogue to be had between “Ford v Ferrari’s” real opponents, but it never quite reaches the open road in conveying the historic implications of events recreated on the screen.

As for the moments when “Ford v Ferrari” reaches 7,000 RPM, the film is often thrilling—a sugary treat to watch on the big screen with the sounds of enthusiastic engines booming in your ears. Scenes of Miles test-driving versions of his race car ahead of Le Mans are undeniably when the movie is at its most fun – to say nothing of the epic, 20-minute Le Mans sequence itself – but I sure wish the movie’s screenwriters made the movie’s automotive lingo more accessible to the racing culture uninitiated. The rattling-off of jargon feels like a foreign language, and the viewer is rarely told why they should care about…ahh, yes, OK, faulty brake systems and torque and such. I know these words. Got it. Sure. At least we’ve got Bale’s ecstatic “Yippee!”s to clue us in. His characteristic gaunt face is effective in portraying the obsessive Miles here, and when he’s grimed up, he looks like an Okie in the cockpit of a rocket on wheels.

The thing that makes “Ford v Ferrari” either a particularly frustrating watch or an annoying paint-by-the-numbers project is the inconsistency with which the thrilling filmmaking of the Le Mans sequence is applied, compared to what comes before. Certain sequences on the track are exuberantly loud, with the revving of historically-accurate car engines providing enough reason for an IMAX ticket. But the movie’s scenes of domestic life and family dynamics feel largely purposeless in comparison, a ho-hum plot unfolding against lavishly-reproduced period sensibilities and a coda that tries to pack too much of the film’s emotional punch that it unfortunately comes off as slightly saccharine. The more detailed and tangible-feeling a film’s world is made to be, the more you had better apply that precision to your script as well. More often than not, this Best Picture underdog doesn’t.

And it’s a shame, because what occasionally surfaces in “Ford v Ferrari” are glimpses of a character-focused work that invests the viewer in the lives of its real-life protagonists as much as strap us into the driver’s seat of a ridiculously fast-moving metal shell. In the canon of recent white-men-moving-past-self-doubt sports dramas, “Ford v. Ferrari” is lapped at every turn by the likes of “Moneyball” and “The Fighter”—pictures that more thrillingly transposed the details of competition against the shadows of their characters’ inner psyches. It’s one thing that a monument to the largely-inconsequential corporate objectives of affluent white men just isn’t all that interesting in 2020; it’s another thing entirely when the movie doesn’t effectively clue the viewer in on the aspirant American spirit of the ‘60s, nor places it in context of our modern sociopolitical age. When the engines start, though, “Ford v Ferrari” is as satisfying as rocketing into first on the final turn.

"Ford v Ferrari" is rated PG-13 for some language and peril.