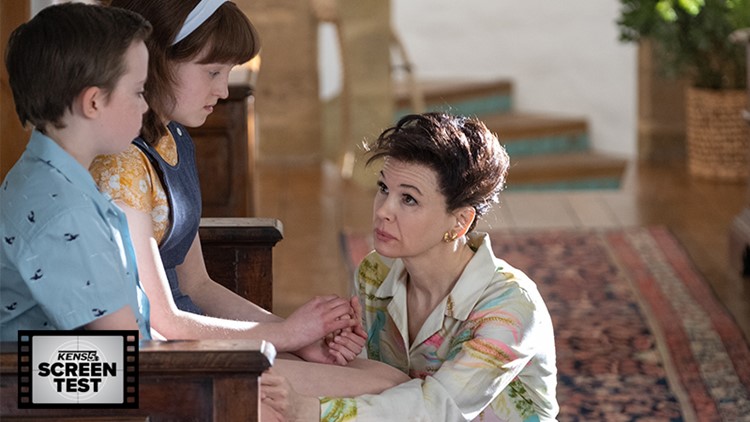 Perhaps it’s high time we decide on a name for the subgenre of biopic pictures where directors place the spotlight on the lives of celebrities, fictional or otherwise, who have fallen from grace and are trying to claw back into relevance. For better and for worse – it’s mostly for worse – Rupert Goold’s “Judy” would check all the boxes.

A movie that so often has us staring directly into the eyes of a fantastic Renée Zellweger’s Judy Garland begins with the American performer center stage, only it’s as a young girl being lectured by an MGM boss, an uncannily Harvey Weinstein-esque figure who will soon take command of her life, on the costs and privilege and celebrity. She could have chosen to be just like any of the other girls out in some expanse the movie suggests we are residing in, but her voice can turn her into something more immortal.

There’s an obvious reason this sequence – with its poppy optimism and overt symbolism of strolling down the yellow brick road – stand out two hours later. None of that brightly-lit disposition comes to pass the way anyone would like to fantasize that it does; these are the precious final few moments of a life which Judy still has some say in.

What transpires next is an unusually cold repudiation of the hope in the young starlet’s eyes—Zellweger’s grown-up Garland is still recognized at parties, but now she is struggling to find a place to sleep, arguing with her husband and popping pills in front of her children. “Don’t worry, these aren’t that kind,” she says in one heartbreaking moment when her daughter begs her not to go to sleep in the taxi they’re in.

Her priority at this point in her life is her children; it’s clear everything she does is for them. Judy is eventually convinced to go to London to perform in a series of shows – a consistent string of paying gigs, at last – so as to possibly be able to buy a real home where she and her children can live. But in the meantime they’ve got to stay at home with dad—a lesser of two evils, and a sacrifice she doesn’t have much choice in making.

If “Judy” – which was written by Tom Judge, his first feature movie screenplay – wants to portray a strained relationship between a celebrity who was never afforded the chance to grow up – she was barely afforded a real childhood to grow up from, after all – and her children, that focus is strangely abandoned not long after the movie’s traipse to the U.K.

If you’re familiar with the Garland story, you know this elongated trip is one of the last Judy will ever make, and Goold seems gleeful in realizing the flickers of Judy’s celebrity. History may have provided the hint, but this isn’t exactly a feel-good story of redemption—it’s seeking something much more innately truthful and raw. Few triumphs are to be had as Judy’s London stay begins, including rehearsals she has no interest in participating in and opening night performances her assistant has to ensure she’s clothed and in a presentable state to attend.

When she does, it’s a typically awe-inspiring performance, her voice finally uncaged 40 minutes into the movie, despite Goold’s hinting at the possibility that the haggard, always-running-on-four-hours-of-sleep singer may just not have it in her anymore. There’s a fascinating evolution on display in the scene in which Judy’s lack of interest morphs into an embrace of what has made her so famous. Not all these London shows end in cheers, but for a moment the movie makes clear Judy’s constantly having to reconcile her cultural currency with her seemingly wishing she could abandon it.

Yet I never felt that Goold and Judge had a confident sense of where to take that aspect of Judy’s persona for large stretches of the movie. She’s constantly on the edge of teetering over and not getting up – not even for a sold-out show – but “Judy” has a frustrating tendency of not committing to clear setups for conflicts aside from the historical one driving the story. There’s a narrative disconnect between her personal trials and a world unaware of them; ostensibly, the appeal of telling this story is that Judy’s star has not quite fallen, but perhaps suspended in our atmosphere—close enough to see, but not to admire.

But there's a distracting lack of nuance from moment to moment, and it prevents the subtlety of the narrative from being somewhat implied to fully realized. Audiences can go from cheering the icon to booing her at a jarring moment’s notice, and a bizarrely-constructed sideplot involving Finn Wittrock as a younger American lover (and eventual partner) feels like an expendable, shallow reminder that celebrity status will often be taken advantage of. In 2019, in an age of deepfakes and social media hacks, don’t we all know it?

That’s a clear theme that powers “Judy”; her celebrity ensured she lost out on a childhood – it practically took place on a set – creating someone seeking something, anything that’s genuine. It’s not particularly a new story, nor is Goold’s way of telling it particularly fresh. Requisite flashbacks to Darci Shaw’s younger Judy being at the mercy of corporate managers channeling their inner Cinderella’s stepmothers are devoid of the nuance they’re meant to bring. This is a paint-by-the-numbers biopic-adjacent movie, and at its worst all the numbers are 1.

At its best, however, Zellweger is mystifyingly good, single-handedly raising the level of a movie that feels like it’s operating at a different framerate. With a sarcastic wit that she uses like a defense mechanism and a towering command of physicality, Zellweger is able to capture what happens you live a life shackled by corporate ownership—she turns in a wondrous, heartbreaking, easy-to-root-for performance that is so good that Goold doesn’t know what to do with it other than let Zellweger rip. When she shrieks “I always have a beautiful show for you!” to a chorus of boos in a show gone wrong, the aching in Zellweger’s voice is a wallop.

I think Goold and Judge sought to show a side of Judy that existed off the stage with their movie. The problem is that when she’s despairing in hotels rooms while popping pills or reminiscing on a childhood stolen, even with an awards-worthy turn by Zellweger, it still feels like a stage—there’s an artificiality to it all that I couldn’t shake. By the time Judy finally hints that she’s fully aware her whole life has been artificial – a sentiment blind-siding in its spontaneity – it’s much too late in the third act for it to materialize into worthwhile examination.

When the credits rolled on “Judy,” I got a notion that she was content not having found her somewhere-over-the-rainbow, thanks to Zellweger’s acutely-manifested pain of having reached the end of the line. I just wish the filmmakers had drawn her as someone who was still actively searching for it.