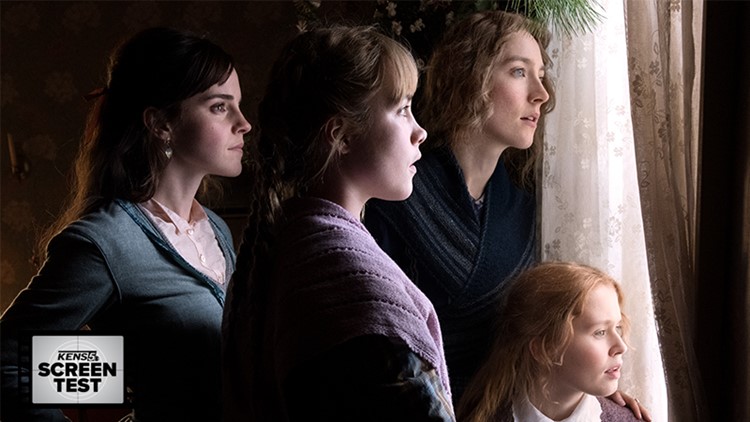 Before any other occupation, we are creators—natural architects of futures limited only by the boundaries of childhood imagination, artists presented with a blank tapestry that evolves from sketches to swatches of paint as goals come into ever-sharper focus. We’re constantly writing our stories with fantasies of the future. Lack of experience isn’t a factor; that comes much later.

As much as we love stories, the author is just as important in Greta Gerwig’s immensely satisfying “Little Women.” In and of itself, that isn’t particularly significant in what is the fourth big-screen adaptation of Louisa May Alcott’s classic domestic story about lessons imparted on four artistically-inclined sisters in Civil War-era America as they transition out of childhood and into futures molded less by dreams and more by realities.

What is significant is Gerwig’s technique; for her second, highly-anticipated film, the “Lady Bird” writer-director triumphantly toys with structure to place renewed focus on homely Meg, vivacious Jo, sweet Beth and determined Amy March as architects of their futures, on the tendency of the child to be their own biographer. In a stroke of screenwriting ingenuity from Gerwig, “Little Women” cross-cuts portions of a familiar odyssey into a fresh remixing of the March sisters’ story, breathing lavish new life into the source material’s themes while modernizing the chestnuts-roasting-on-an-open fire period drama with a contemporary energy reminiscent of the filmmaker’s rambunctiously funny first feature.

If a chronological telling of the March sisters' story is a coming-of-age tale, Gerwig’s re-jiggered, rejuvenating iteration proves to be a tale of coming into one’s own—of ambitions refined and redefined as our beloved little women navigate traditional constraints with progressive sentiment. The emotions that swirl throughout are foundational and instructional; “Little Women” is joyous without being kitsch, halcyon without feeling grim, and wise without feeling preachy. It’s simply a cinematic joy, and one of the year’s best.

Those familiar with the “Little Women” story will notice Gerwig’s unconventionally-constructed narrative from the jump: Instead of opening on four young March sisters on Christmas morning, we briefly are introduced to two of them as adults. Jo (a characteristically fiery Saoirse Ronan) is in New York and selling her stories (though ones without morals; “They don’t sell,” a publisher insists), having started her path of self-sufficiency. Meanwhile, Amy (Florence Pugh, putting a stunning capper on her breakout year) is accompanying Aunt March (Meryl Streep, delightfully caustic) around Europe when she runs into an old friend of the March family from across the Atlantic, Laurie (Timothée Chalamet), and extends an invitation to a ball that evening amid subtle glances of affection.

It’s clear there are histories to be fleshed out for these characters, but it’s also clear from early on how Gerwig’s intentions transcend gimmickry and find purpose. Instead of anticipating where the sisters end up, Gerwig’s “Little Women” re-locates eventual payoffs to how they get to be where they are, in mind as well as in life—the foundational virtues, the shifts in character, the socio-economic forces nudging them in certain directions.

RELATED: The 25 best movies of the decade

RELATED: Movies in the 2010s largely captured, and warned of, our moments of reckoning

How will we be able to differentiate between periods in time? Gerwig makes that easy, too. The moment the movie’s internal clock winds back seven years and we meet the younger versions of the Marches, we’re vaulted into a mode of more playful filmmaking, of a relationship built from steadfast sisterly love and warmth that radiates emphatically through the screen. Shot-to-shot cuts come quicker and more compulsively than the film’s more deliberate opening minutes, and an acute cinematic jubilance contrasts the melancholy tone of scenes from seven years into the future.

That sensation also, vitally, connects the performances of Ronan, Pugh, Eliza Scanlen as Beth and Emma Watson as Meg. Gerwig recognizes that “Little Women” can only soar as high as the chemistry between its four leads, and we’re lucky as moviegoers that this is not only never a concern under her direction, but a well of delight that never runs dry. (I wonder if Gerwig considered how the audience’s familiarity with Ronan, Watson and Pugh – a trio of well-known, well-regarded actresses – would provide us, and her, with a head start in bringing the characters to life.)

There’s a heaviness to the adoration the March sisters have with each other that’s not often glimpsed in movies, but it’s as tangible as the house they live in, almost as if the stars portraying them were related in real life. Watching them console each other, confront each other, bicker, laugh, play and personify the undefinable – but instantly recognizable – qualities of what makes this quintessential American family a family is one of 2019’s true cinematic treasures. Chalamet, meanwhile, is perfectly sympathetic as Laurie, adopted by the Marches as a surrogate sibling who matches their effervescent spirit step-for-step.

But watching them grow is just as important to the “Little Women” legacy, and Gerwig weaves the push-and-pull of childhood and maturity, plans and reality, empathy and agency into a delectably substantive product. The more the film spritzes on, the more its dual timelines harmonize with each other; events contemplated from the past and events realized in the future mirror each other with remarkable accessibility as flashbacks feel less like flashbacks and more like memories revisited. The later timeline isn’t without its own narrative thrust, propelled by an emotional crux of an event with a build-up that is engaging and also smartly utilized by Gerwig to organically provide conduits back to the past.

Meanwhile, those past anecdotes add texture to the familial dynamics played out against lavishly-shot backgrounds—moments in lives remembered for the in-the-moment comraderie as well as the worldly knowledge gained by the Marches, even as that knowledge grows from foundational teachings of forgiveness into the compromising of love, ambition and financial necessity reserved for the precipice of womanhood. Even as “Little Women” bounds along with seamless flow, you can pluck individual scenes – Jo meeting Laurie for the first time, Meg getting a taste of high-society lifestyle that’s out of her reach, Beth growing in affection to her neighbors – like stanzas of a tender song, eventually returning to a chorus of wisdom often sung by Laura Dern’s matriarchal Marmee (in a quieter key here than her “Big Little Lies” and “Marriage Story” turns, but no less good).

The movie’s triumph is rooted in the four young actresses; particularly Pugh, whose doing something different than her costars by deftly combining a self-awareness of Amy with the blasé confidence needed to bring the youngest March sibling to life as a child, and later with the conviction that makes the older Amy an appropriate portal to some of the story’s most enduring themes.

But “Little Women” blossoms under the direction of Gerwig, who is a reliable conductor of emotion, and also highly skilled at mirroring mood with production design (a tip of the hat to Jess Gonchor in that regard). Pay close attention to subtle differences in how cluttered the March house feels, resembling how lived-in it is at any given point in the story, as well as the evolution of colors that change like the seasons; even as the tune might become a bit colder in its final third, it’s no less earnest. And I can’t in good conscience neglect to mention the merry strings and stirring pianos of Alexandre Desplat’s score, an uplift of the heart in audio form.

Those familiar with “Little Women” will know that it takes its turns for the somber, complicated and inevitable—what makes the March sisters so distinct is part of what makes them so timeless, after all, and the goals they have for themselves doesn’t call for them sharing the same home forever. Some of their futures turn out to more closely resemble the stories they’ve authored for themselves as children than others, but each experiences a moment of reckoning that proves life will always have one more lesson to teach.

This is a very generous film, to Gerwig’s ends, to Louisa May Alcott’s, and to our own. It never stops bursting with life, and never for a moment feels malicious—unfair, perhaps, but never malicious. Gerwig’s slightly-amended ending fortifies the March sisters as writers of their individual stories, now with more tools and possibilities they couldn’t have yet imagined while waking up with glee on that Christmas Day several years prior. It’s a supremely of-the-moment message from the film’s director. Plans are phoenixes, Gerwig shows here. They rise, again and again, from the ashes of themselves.