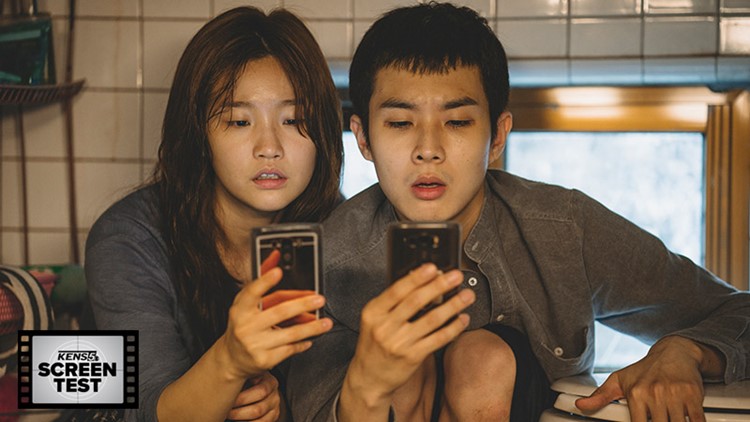 SAN ANTONIO — One of the more uniquely integral aspects of Korean director Bong Joon-ho’s films, particularly over the last 15 or so years, is a meaningful sense of place—a realization of geography between characters and their goals that extends to mood and meaning, and which ultimately turns the experience of watching a 2-D movie into something more tangible, thrilling and involving. A major reason the writer-director’s 2006 monster movie “The Host” endures is the symmetry of how physically close the bumbling Park family is to finding the captured Hyun-Seo and the minimal extent to which the forces of authority are willing to aid them; the ecologically-minded themes of 2017’s “Okja” are drawn out through the movie’s dichotomy of location as it goes from serene South Korean jungle to dangerously bustling American metropolis; and you can’t discuss 2013’s “Snowpiercer” to any extent without touching on the deliciously simple symbolism of the class hierarchy toppled horizontal in the form of a speeding train, with cars that become more affluent and cozy the closer you “fight your way to the front,” as the tagline reads.

Joon-ho’s “Parasite” – the 2019 Palm d’Or winner and now a righteous Best Picture nominee nine months later – brilliantly manages to find a primal form of his filmmaking ideologies while evolving them into a magnificent – and bloody – cinematic Russian doll. A story of class struggle that literalizes economic imprisonment, “Parasite” is both evocative of current global truths and also an echo of the sociopolitical commentary that the auteur injects his films with, giving what he’s saying as much consideration as how he’s saying it. Namely, by bouncing between genres as defly as he ever has, and in endlessly-thrilling fashion.

In this, the very best movie of 2019, Joon-ho’s coherent sense of place very much returns. But he’s perhaps never been so blunt, exacting, satisfying and omniscient at shattering the lines separating metaphor from reality.

Act I of this story centers on the down-on-their-luck Kim family, who leech WiFi service from nearby coffee shops and spend their days communally folding pizza boxes to get by, or at least get to the next day with food in their stomachs. Everything about their daily routine feels a bit mechanical, a bit routine, as if they cannot afford to dream about higher aspirations—let alone their own WiFi.

It’s easy to have sympathy for the Kim family, the patriarch of which, Ki-taek, is played by frequent Joon-ho collaborator Song Kang-ho. Now in his 50s, Kang-ho – who’s excelled at playing the goofball underachiever in Joon-ho’s past films – is suited for something more world-weary, and knowingly world-weary is exactly how Ki-taek comes off from the moment we meet him, even as he whimsically blurts “Glory to the holy WiFi!” It’s a funny moment, but also tinged with melancholy by the Kim’s situation. Joon-ho orchestrates every element of “Parasite” to a T, including our emotions.

The short-term situation of the Kims suddenly begins to look up when the son, Ki-woo, is shown an opportunity to make some money by tutoring the daughter of the affluent Park family. No matter that he’ll have to fake that he’s college-educated; he slyly plays the simple-minded Park matriarch, Yeon-Kyo (Jo Yeo-jeong) with a level of startling ease, and he’s off to bringing in more money than his parents or sister could ever have imagined. Slowly – and with a sense of uneasy organic direction, as if there was no other option – Ki-woo and his family turn his opportunity into a hilariously-staged, tightly-considered plan to improve their station by connivingly attaching themselves to that of the Parks’, and onto the ultra-sleek urban mansion that feels idyllically separate from the Korean streets it sits above.

The culmination of their scheme – one that Joon-ho makes easy for us to root on, before wrecking and testing the audience’s loyalties – is an operatic marriage of sequencing, musical score and slapstick sentiment that proves Joon-ho is at the top of his game. Rarely does a movie unfold with such satisfying clockwork precision—and Joon-ho, who shares David Fincher’s drive for perfection, inserts intention and meaning into everything in “Parasite,” from each cut to an actor’s glance to a camera movement…

….to completely pulling the rug out from beneath our feet. Joon-ho is both poking fun at himself and laying bare his agenda when Ki-woo exclaims, more than one, how metaphorical something in front of him is. If he only knew. Joon-ho’s indictment of 21st-century capitalist structures is made coherent, and given scathing tangibility, in the dichotomy between the Kims’ and Park’ respective abodes—in the case of the former, a look out the window curses them with the sight of a drunkard urinating on what constitutes their front porch. For the latter, venturing outside means journeying onto lush green lawns and backyards, with trees blocking their view of who lives further down the class hierarchy. It’s obvious what the verticality of “Parasite” represents, what stairs symbolize and what the juxtaposition is commenting on. Just as deft is Joon-ho’s toppling of the belief system he has implemented, and which the Kim family has ascribed to, once a former servant of the Parks’ whom the Kims surgically removed returns to the home in ostensible good graces. What follows is a second half as sensationally propulsive as the first, with consequences and fallout shifted to the fore.

Suffice to say, as everyone else has: The less you know about the mid-movie development in “Parasite,” the better. Joon-ho reveals harrowing, bitingly truthful depths to his subject matter like a fulcrum engineered for maximum cinematic impact, without sacrificing the pitch-perfect pacing and meticulous construction that comes prior. He takes wild swings in genre – one minute “Parasite” is comedy, the next palpable thriller, the next still something akin to a manifesto to bleakness and inevitability – yet the movie never lurches uncomfortably into new tonal territory. Rather, Joon-ho ensures the transitions are as natural as absolutely possible. Once the Kim family finds itself scrambling to keep its operation a secret, the film reaches a velocity in which you can never expect what’s going to happen until it does—yet every entertaining development feels like the only possible outcome that could have been had for a pair of families that have become entangled in a web of economic anxiety and fatal notions of self-sufficiency. Joon-ho – who wrote the screenplay with longtime collaborator Jin Won-han – makes it devastatingly clear where he stands on the things he’s made a career tearing into in his movies, to the point where you feel emotionally spent by movie’s end. The reason goes far beyond what actually happens in it—to the truths it bloodily carves out about the ways we live, and the ways we simply can’t.

With how tightly-orchestrated the movie feels, it only makes sense that the individual parts of “Parasite’s” ensemble cast never do less than harmonize with each other. Song Kang-ho is reliably great, but perhaps even better are Park So-dam, Jo Yeo-jeong and Lee Jeong-eun, who bring the subtleties of their respective socioecological situations to the fore in ways darkly humorous and endlessly-entertaining. Lee Sun-kyun, meanwhile, handily takes on the role of wealthy, and tidy head of house who can’t be bothered to divulge a sense of affection beyond the instantly-gratifying.

Perhaps the great triumph Joon-ho achieves with “Parasite” aligns with his greatest sleight of hand. Keenly aware of how mass media and popular culture have molded our sentiments about the ultrarich and everyone else, he folds our sympathies back on themselves, forcing the viewer to examine their ways of thinking by revealing varying rules of gender, family dynamics and motivation on each rung of the class ladder. And he does so without sacrificing the humanity of his characters—the Kims, the Parks and others aren’t merely pawns in Joon-ho’s social critique. They, and the realities connecting them, are what is at stake.

"Parasite" is rated R for language, some violence and sexual content.

RELATED: Who will win, and who should win, at Sunday's Academy Awards

RELATED: 'Once Upon a Time...in Hollywood' Review: Tarantino contemplates and embraces his version of an era

RELATED: 'Gretel & Hansel' Review: There's evil in the wood, but maybe something more, too

RELATED: 'Ford v Ferrari' Review: Racecar drama isn't quite as gripping in its story as it is thrilling on the track