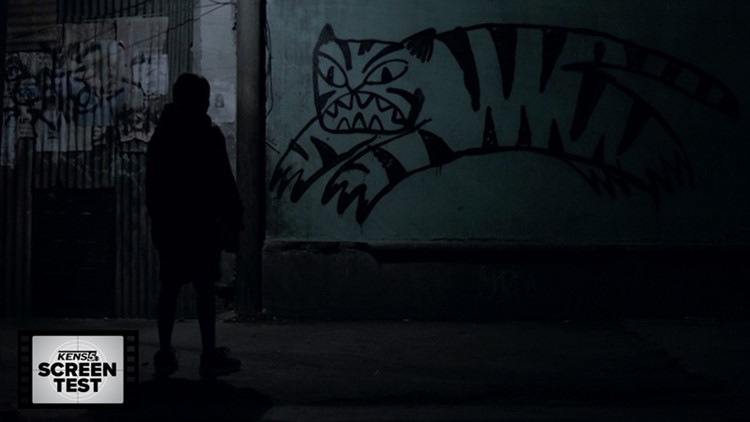 Review: 'Tigers Are Not Afraid' is a devastating, creepy blend of dark fairy tale and real-world violence

In “Tigers Are Not Afraid” – the 2017 movie from Mexican filmmaker Issa López that is small on budget, high on craft and just now hitting screens in the U.S. before arriving on the horror streaming service Shudder, including a limited run in San Antonio this weekend – grown-ups are nowhere to be found.

Kids live and scavenge on their own, settle into makeshift homes on rooftops, and journey through urban underworlds. It could almost be a utopia of sorts, an anti-Neverland that has traded jungles for graffiti’d buildings that look like they were previously targeted by bombs, forming an empty Mexican ghost town with a desolateness so stark it’s almost post-apocalyptic.

But López instead manifests that youthful isolation in heartbreak, in longing, in the very real effects that the Mexican drug war has had on families…and on tearing them apart. Since 2006, the movie lets us know early on, tens of thousands have disappeared or been killed in the country.

Their children, we learn, practically go uncounted for.

One of those kids is the young Estrella, whose story is only as fictitious as the mystical turns it takes. After her mother is kidnapped by a local gang, all she can do is wait for her to return. Leaving their home would be confirming the worst—but she’s forced to do it nonetheless when she begins to hear strange voices, and becomes haunted by the memory of her parent.

Estrella – played by Paola Lara, an actress who can’t have been more than 10 or 11 when “Tigers Are Not Afraid” was being made – eventually joins up with a local group of orphans whose parents, we assume, have also been ripped from them by the drug war. But these dirtied-up boys, led by the tough-seeming Shine, have been in Estrella’s shoes for a long while. They’ve made a legitimate family among them—they chastise one another to go to sleep and go to extreme lengths when one of their own is taken by a gang, lengths that Shine pushes Estrella to achieve so she can stay with them. Though, you can tell from the look behind the actor's eyes, he wouldn't dare carry out the act he asks Estrella to do.

For a story whose mainstream appeal is being billed as a dark fairy tale, I deeply appreciate López’s priorities lying elsewhere. As the opening statistics suggest, this is a story first and foremost about the kids at its center, avatars for a demographic – a generation – forced to contend with violence unfolding all around them. It gives the movie an air of docudrama without ever fully embracing the label (it doesn’t have to) and without making an explicit political statement (it doesn’t want to), yet I suspect the Parkland survivors would find something terrifying familiar about Estrella's situation.

RELATED: Review: 'Brittany Runs a Marathon' is an exercise in layered, entertaining storytelling, and creates a star out of Jillian Bell

RELATED: Review: 'After the Wedding' is a joyless, shoddily-constructed amalgam of a movie

As an allegory dedicated to the children unable to have a childhood of their own through no action of their own, “Tigers Are Not Afraid” is a devastating watch, but it’s through López’s marvelous direction that it functions just as well as a piece of entertainment that nonetheless transcends the expectations we have for it.

It’s a ferociously unforgiving story with real teeth – ironic, given it doesn’t lean into what we perceive as “horror” as much as you’d most likely expect – and its cinematic currency is raw pathos. Because it’s a lean, manageable 80ish minutes, it never goes bankrupt on it.

What passes for the movie’s explicit frights come in only a handful of scenes in “Tigers Are Not Afraid,” and their scarcity plays a hand in their effectiveness. López, who wrote and directed the movie, builds her scares on a foundation of humanity and empathy that we see not only in the eyes of its young cast – uniformly the best ensemble of child actors I’ve seen in a movie since 2017’s “IT,” and perhaps even better – but also in the ghoulish force attached to Estrella. It’s cloaked in shadow, with an unnerving nature and motive we never really get a good look at until the film’s ending.

It’s a testament to López’s representational storytelling – she refuses to conform to Hollywood standards – that the dark force comes to be a harbinger of catharsis by movie’s end. There’s something to be said for the movie’s fascination with the power of fairy tales, but it’s a power you can more readily grasp than, say, “Scary Stories to Tell in the Dark.”

Instead, I felt the movie’s real darkness whenever López’s focus is the plight of Estrella and her newfound family. The disturbing nature of “Tigers Are Not Afraid” (called "Vuelvan" in Mexico) isn’t strange flourishes of the fantastical, but witnessing Estrella, Shine and the other kids being forced to grow up much too fast in order to try and build a sense of childhood now out of their reach. It’s rare for a movie to so organically adopt an attitude of less is more, but in their situations, less is the most they possibly can have.

The torn shirts on their backs. The smiles on their faces at coming across a puddle with fish (“A zoo!” they proclaim). The unspoken promise that they would die for each other before one of them becomes another of the country’s unaccounted-for. You almost forget this is a story with a dramatic narrative until the somber score kicks in, as well as some inevitable turns with plot that round out a third act with unexpected, gut-punch developments – developments that include a local gang leader hunting the kids down and the motives of Estrella’s mother’s spirit becoming clear – and the result is the most darkly satisfying movie of the year, non-Ari Aster division.

That’s interesting for me to write, given, after the ceaseless emotional wallops the movie’s climax provides, I expect It’ll take some time before I can fortify my emotional barriers enough to dare returning to it again. Guillermo Del Toro would be proud of López’s effort with this movie—which is probably why he’s producing her next project, one that immediately has found a home among the movies I’m most looking forward to beyond 2019. This one’s ending is one you can expect to linger with you long after the credits.

Even as original stories are becoming more of a treasure in today’s Moviescape, “Tigers Are Not Afraid” is a bonafide gem of minimal storytelling—mostly because, aesthetics aside, this story isn’t a minimal one at all, nor one that should be minimized. Children being separated from their families is a theme that has its own connotations in 2019, but so is the ever-present spirit of violence that haunts the children of this movie at every turn…violence mostly distributed through the chamber of a gun, and with the undying possibility that it will rear its head. You might as well say it’s a haunt.

"Tigers Are Not Afraid" isn't rated, but it has some atmospheric scares and ghoulish specters, as well as violence involving children