"The Worst First Day" is Eckford's first book. It is one of the few times she has opened up about the Little Rock Nine. 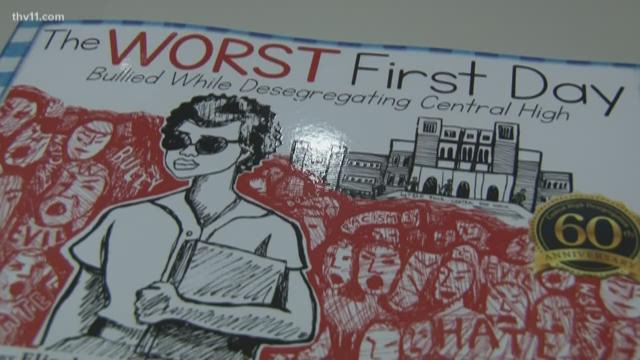 LITTLE ROCK, Ark. (KTHV) – Dozens of people showed up to meet Elizabeth Eckford and hear her talk about her first book detailing her experiences in the Little Rock Nine.

Eckford signed copies of her book “The Worst First Day: Bullied While Desegregating Central High” at the Little Rock Central High School National Historic Site. Eckford is among eight surviving members of the group of black teenagers who integrated Central High in 1957.

"She reminds me of the importance of resisting evil and resisting hate,” Anika Whitfield said.

There’s no question Eckford is nothing short of an inspiration to millions. People who showed up to meet her Saturday were grateful to hear her tell her story.

“She’s one of those people who is still able to recall very acute things that happened to her when she was 15 years old,” Whitfield said.

Eckford arrived alone at Central High the first day the group tried to enter the school in September 1957. The image of Eckford walking down Park Street with books in hand and students shouting from behind her has become one of the most famous photographs of the 20th century.

“Just to have the strength and the courage to keep coming back day after day. Me, personally, after the first day, I probably wouldn’t have come back. But to know and to hear what it took for her to do that, I found it very enlightening. Fascinating,” Rick Norris said.

“The Worst First Day” is Eckford’s first book. It is one of the few times she has opened up about the Little Rock Nine.

Why did she finally decided to write a book?

Eckford said when she looks back on that day 60 years ago, she does not have the intense fear that she had then.

"I simply wanted the best education possible. I thought that when people got to know me that they would except. But I learned the lesson that for some people I wasn't a human being. Just an object,” Eckford said.

She said she wanted to write this book because she feels there is a stronger message behind her story. She wants people to start standing up to bullying.

“The Worst First Day” goes into detail what it was like attending Central High that first year. She also unveils some details she discovered decades later.

“I found out that the newsman standing behind the bench were local people and they voluntarily did that to be a human barrier between me and the crowd,” Eckford said. “I know that one of them was a staunch segregationist, so I say for him he had a moment of humanity.”

Although the Little Rock Nine happened 60 years ago, Eckford wants her story to be a reminder about how far we still have to go.

"We've come a long way but we keep repeating our mistakes of the past. I hope that it opens some eyes,” Eckford said.

She hopes by telling her story, people will feel inspired to do and say the right thing.

"A lot of people are being hurt every day. And people need to notice and not be bystanders. They can actually be a significant change for somebody,” Eckford said.

Eckford co-wrote the book with the mother-daughter team of Eurydice and Grace Stanley.

Copies will be available for sale at another event Sunday morning at Trinity Episcopal Cathedral beginning at 10:15 a.m..