We've all heard the term 'power couple,' but in Hot Springs, we may have found the most powerful couple on the planet. 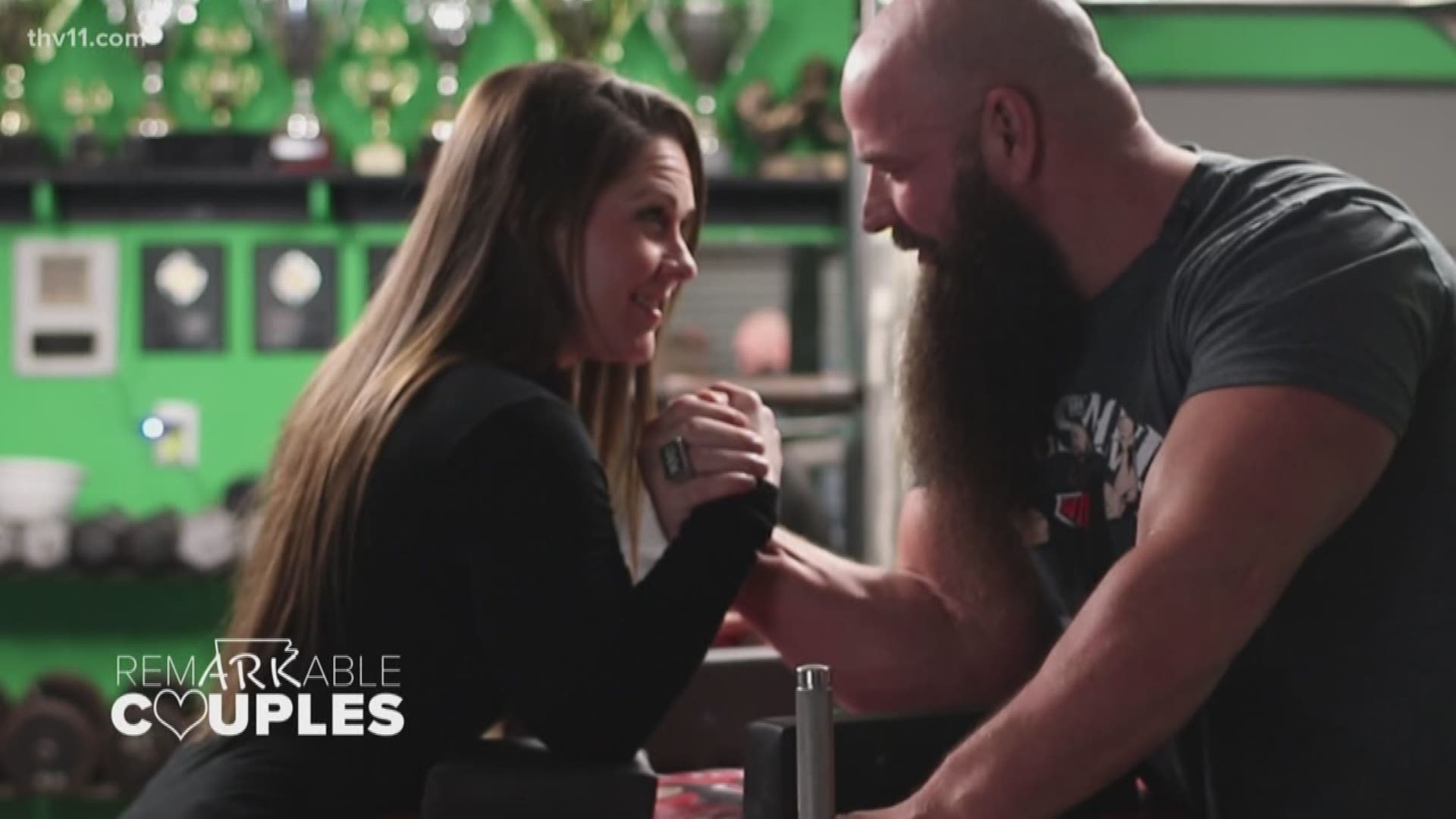 HOT SPRINGS, Ark. — Our week-long focus on Remarkable Couples continues. We've all heard the term 'power couple,' but in Hot Springs, we may have found the most powerful couple on the planet.

They say a couple who plays together, stays together. For the Todd family, the sport of choice is arm wrestling.

Michael and Rebecca Todd's love story began eight years ago. "It was him first!" she laughed, "everybody thinks it's different. It was him."

"He comes out," she explained, "this big guy, I'm totally terrified and he says, 'yeah I'm kind of a big deal.'"

"I still don't think I said that," laughed Michael.

"He said that," she said. "That is exactly what he said. I'm pretty sure he has a shirt that says the same thing."

"I do have a shirt that says that," he admitted with a smile.

Several weeks into her personal training sessions, she noticed a change.

"He kept messing up the count. I'm like what is going on with you? Are you distracted? He said I am distracted. It's you. I'm attracted to you. So I'm like peace, I'm out and I left. I was terrified," she remembered.

A few days later, though, she had a change of heart.

They began dating. Rebecca got her first taste of arm wrestling during the 2012 State Championships, thanks to a last-second push from Michael.

"I threw her in and I said all you have to do is when they say go pull straight back and then sideways like you're pec decking," he explained.

"I ended up winning the tournament," she said almost shocked. "And that was the worst thing I could've done because he said I'm going to make you world champion, and I was his project."

Oh, how the tables turn, though. As Monster was about to become her project.

"When we got together," she admitted, "Michael's life was all about Michael."

But he listened to her, and it turns out, behind the appearance of this 21-time world champion, Michael has a soft side.

"He's so emotional," she added. "I'm this big macho guy right, but I'm very in touch with my feelings," he said.

She was determined to bring out the softer side.

"He has a switch. When they say ready to go, he becomes the Monster. Off the table, he's just my teddy bear, and let me tell you a little story that happened just the other night. We're lying in bed," she started to explain, as Michael jumped in, "I have no idea where this is going." "This is one of my proud wife moments," she added.

She explained the two heard noises from outside their home ― what sounded like a pack of coyotes, harming another animal. That's when Monster made a move.

"He jumps up," she described, "throws his clothes on, and he says I'm going to go find it. I've gotta make sure somebody's okay. I'm looking at him like, you've really changed."

The not-always-a-monster Michael and Rebecca Todd. A remarkable couple, who are just getting started. "So there's so much out there to see and I want to see as much of it as I can with her."

This is pretty much the world's most interesting family. Their son is a seven-time national arm wrestling champion. Monster just had a role on the hit CBS show 'SWAT,' and recently tried out for a big-name Hollywood movie.

RELATED: Arkansas couple working to solve malnutrition one taco meal at a time