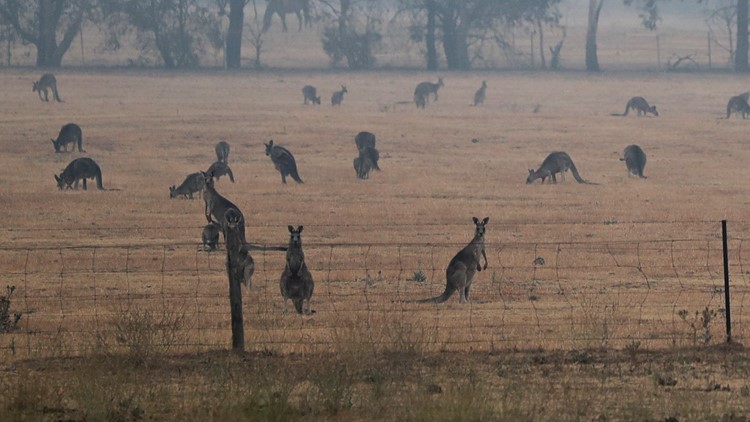 Photo by: Mark Baker/AP
Kangaroos graze in a field as smoke shrouds the Australian capital of Canberra, Australia, Wednesday, Jan. 1, 2020. Australia deployed military ships and aircraft to help communities ravaged by apocalyptic wildfires that destroyed homes and sent thousands of residents and holidaymakers fleeing to the shoreline.

A firefighter was caught on camera helping out an animal in need amid the wildfires spreading across much of Australia.

Ryan Pollock shared the photo on Instagram of his friend, a firefighter with the Parks and Wildlife service, hand-feeding water to a kangaroo he named "Jerry" in the Stirling Range National Park.

"This was such an emotional moment. After Jerry had a belly full of water he bounced off into unburnt bush land," Pollock wrote.

Ecologists at the University of Sydney fear millions of animals have been impacted as a result of the destruction. The Associated Press reports Prime Minister Scott Morrison said more than 20 people have died and about 3,000 reservists are being called to battle the fires.

The deadly wildfires, which have been raging since September, have already burned about 12.35 million acres of land and destroyed more than 1,500 homes, according to AP.

RELATED: Nearly half a billion animals impacted by Australia wildfires