Snakes alive! Your go-to guide for understanding snakes in Arkansas

Snakes are showing up and people across the state are getting spooked. 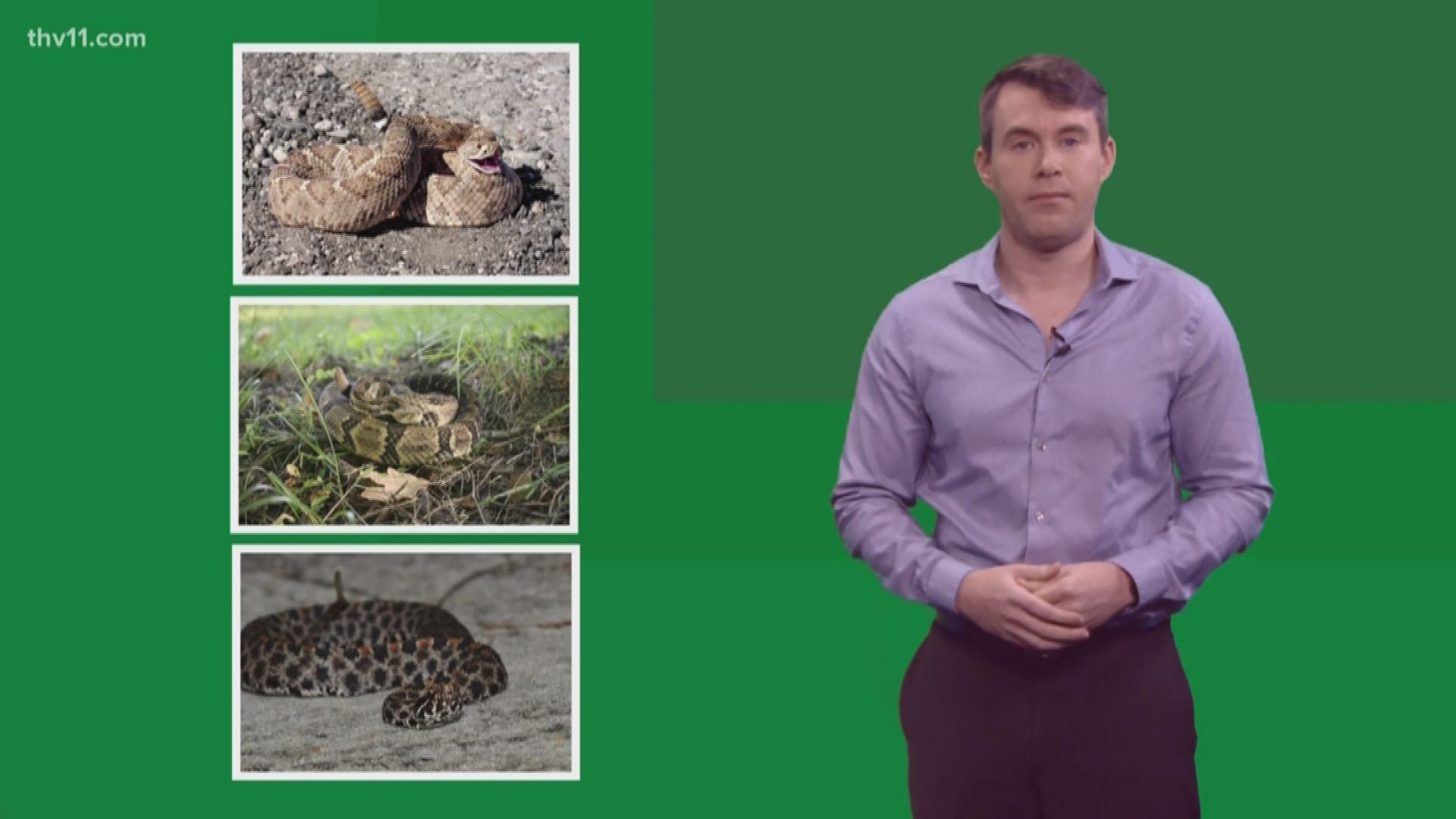 Now that the days are getting much warmer and the nights are mild, your nerves may have been rattled by the discovery of a snake while hiking, tending to the garden, or getting something out of the shed.

Snakes are showing up and people across the state are getting spooked.

Arkansas is home to 36 species of snakes ranging in sizes and colors. Out of the 36, only six are venomous. We have three rattlesnakes in the state, the western diamondback rattlesnake, the timber rattlesnake, and the pygmy rattlesnake.

All the rattlesnakes can be found state-wide except the western diamondback which stays in west-central Arkansas.

The other three venomous snakes are the copperhead, cottonmouth and the coral snake.

Non-venomous snakes like to copy the colors pattern or even the behavior of venomous snakes to scare away predators. Dr. Rebecca McPeak, a wildlife specialist with the University of Arkansas Cooperative Extension Service said.

You may remember something similar to this rhyme when identifying a coral snake versus a harmless milk snake.

To identify the other five venomous snakes, which are known as pit vipers, is to look at certain features.

Rattlesnakes have rattles, (obviously), but the eyes of the pit vipers look like a cat, the pupils are narrow, unlike non-venomous snakes during the day which are round.

The head of a viper is more triangular, and you can see the pits behind the nostril.

However, not all triangular shaped heads belong to venomous snakes. The eastern hognose looks like a rattlesnake and will increase the size of its head to look more threatening.

Credit: Getty Images/iStockphoto
An Eastern Hognose Snake found in the Panhandle of Florida.

Other snakes will vibrate their tails against dead leaves to mimic a rattling noise to scare away enemies.

In Arkansas, it is illegal to kill any snake according to the Arkansas Game and Fish Commission. The only reason to break the law is if the snake “poses a reasonable threat or endangerment to persons or property.”

Snakes, no matter what you may think, are important to the balance of nature.

The reptiles keep the rodent and insect population in check and some non-venomous snakes, such as the king snake, will eat the venomous ones.

Snakes are also food for owls, hawks, bobcats and fish.

To decrease the chances of seeing a snake, make sure you don’t have birdseed lying around. This is a food source for rodents which attract snakes, McPeake said.

Try to eliminate any spaces where the snakes could hide from the heat and sun.

The temperatures that you consider to be nice are also prime for snakes to slither out of their hiding spots.

RELATED: Beware when adventuring outdoors; Arkansas is home to 5 different species of ticks

In the Spring and Fall snakes may be out at any time, but by summer you are more likely to see them in the shade, or from evening through the next morning.

Snakes will likely scurry away if you make noise and don’t reach in a flower bed under leaves or pull weeds blindly. Inspect the area with a pole or long stick first, to chase out any snakes that may be hiding.

Going for a hike in the woods or walk in the field, wear thick high boots, watch every step you make and be aware of places in between or under rocks, under the leaves, and in or beside logs.

If you see a snake, McPeake said just leave it alone, don’t anger it or try to pick it up.

Remember they are usually more afraid of you and want to get away without conflict.

As for repellents, McPeake said, you may be wasting your money because one method does not keep away all snakes.