James Nowlin was stuck in the snow for more than an hour after slipping and falling, fracturing his femur. He thought he may die, until an unexpected hero arrived. 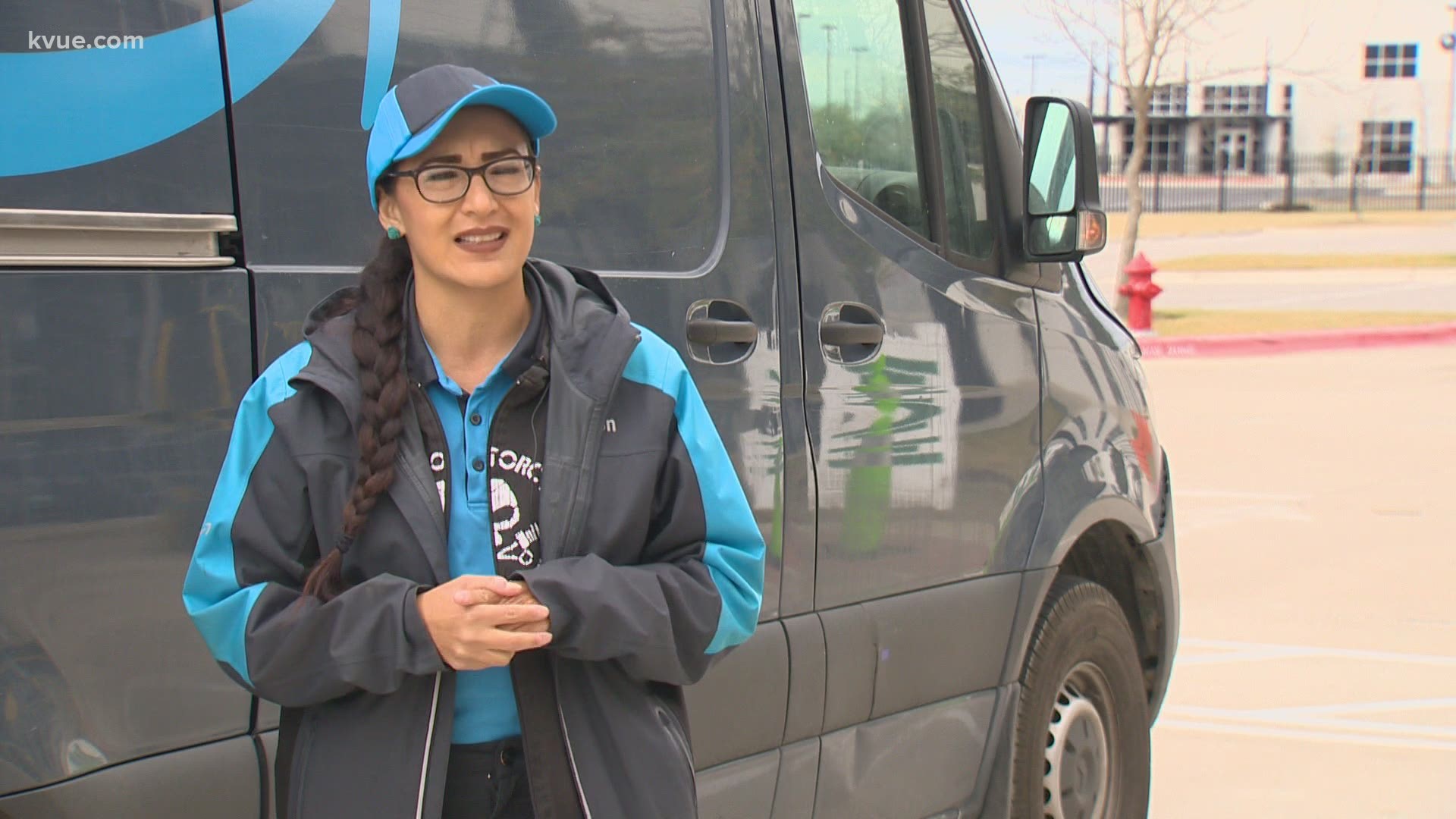 RED ROCK, Texas — On Jan. 10, many Central Texans remember it as a day where the Austin area saw a rare and decent snowfall.

But for Senior U.S. Federal District Judge James Nowlin, it's a day he may never forget ... because of what happened potentially due to that snowfall at his ranch in Red Rock, Texas.

"I spend as much time as I can at the ranch, primarily because it's peaceful," Nowlin told KVUE over Zoom.

The 83-year-old is still serving as a judge for the Western District of Texas, but has spent more time at his ranch in the rural Texas countryside recently due to the pandemic.

Despite the snowfall that Sunday, Nowlin had an errand to run.

"Well, as a creature of habit, I normally on Sunday afternoon when I'm at the ranch, will take the trash can out and put it on the road outside the gate where the trash guy comes on Monday morning and picks up the trash," Nowlin said.

The gate to his ranch and the home on the property is separated by a very long driveway, which is why Nowlin decided to drive his car to the gate that day to set out the trash.

"I was in the process of moving it out the front gate kind of across that cattle guard, but I was trying to stay away from the cattle guard," he said.

Nowlin added that he was trying to avoid the cattle guard because the snowfall potentially made it slippery.

It was a fall that doctors would ultimately tell Nowlin led to a fractured femur. Nowlin was unable to move.

"I know it was even more serious when I looked and saw that I could not move my left leg," he said. "I could not get on my feet to get back to the car or basically to move anywhere other than push myself with my hands on my butt ... which I did back up across the cattle guard to my car ... which is parked maybe 50, 60 feet away inside the gate. So I got up to the car thinking I could grab hold of the door handle on the driver's side and pull myself up. I was unable to do that."

All Nowlin had on was a UT baseball sweatshirt and some sweatpants. Because he thought this would be a quick errand, he didn't have his phone on him. No one else was home at the time.

Nowlin now found himself stuck in the snow and the cold for more than hour, unable to call for help. Nowlin recalled two cars passing by on the country road in front of his ranch, which he tried to signal for their attention, but the drivers didn't see him.

"And this was one of those situations where I was down on the ground, it was snowing more heavily. It was cold as hell, and I couldn't take care of myself. I couldn't do anything. So it was a precarious position," Nowlin said. "I think I said, 'Oh, God,' several times."

While Nowlin remained stuck outside in his driveway, longtime Austinite Elisha Infante, who is a delivery associate for Strategic Growth Logistics (an Amazon Delivery Service Partner), was working that day. By chance, she had to drive through Red Rock.

"I was a little nervous for the day because I've never driven in snow. Texans ... we don't really experience snow too much," Infante told KVUE. "So from this station, I had a 40-minute drive to Red Rock and I actually made a few deliveries and it was pretty scary going over there because I did see two accidents even going on to that area."

Eventually, Infante found herself going down an empty country road in Red Rock, unknowingly getting closer to Nowlin's ranch.

"And I was turning a corner and something told me, look to my right. And I don't know what it was. I don't know if it was a spirit, an angel, the guardian of some sort or just intuition," Infante said. "I saw a man frantically waving his hands and he had a lot of blood on his hands, and I knew he was in a lot of trouble and I stopped. I passed him because I couldn't brake immediately, obviously, and I passed him. And I just kept thinking like, 'Oh, my gosh, what am I going to do,' you know? So I just reversed and I stopped and I knew it wasn't good because I saw he didn't have shoes on."

Infante quickly grabbed her phone to call for help and let her manager know what happened. She said her manager encouraged her to stay and help Nowlin.

Infante then spent the next half hour waiting with Nowlin for medics to arrive. She'd wrapped Nowlin in her Amazon coat, among other things to keep him warm.

Infante told KVUE they talked about things like UT baseball games to keep his spirits up, but before long, she worried that the effects of hypothermia were setting in.

"And then he says, 'I'm not feeling good. I can barely talk to you. My eyes are getting heavy, and I can't feel my my hands and my feet,'" she said. "So I called 911 again. And I was like, 'Alright, I think this guy might be, he might pass out on me. Can you tell me again how to do CPR?"

The 911 operator instructed Infante how to perform CPR, but thankfully, it was not needed as medics arrived in a half-hour to the ranch, bringing Nowlin into surgery, which he is now recovering from.

"I thought, 'That's somebody's grandpa,'" she said. "I know something or somebody put me there. I know that for a fact because I know what I felt and I know a lot of people don't believe in faith or they don't believe in stories like this. But it's real, you know? Somebody sent me there. I never go to Red Rock, ever."

Infante noted that no other cars had passed by during the time that she was with Nowlin waiting for first responders.

Nowlin believes that had Infante not stopped, he would not have made it.

"An angel and a saint," Nowlin said, describing Infante. "So, I believe that I would have probably perished if she had not come by."

Following the incident, Infante kept in contact with Nowlin's family.

After leaving a voicemail with his office, Nowlin's sister gave Infante a call back, asking for her boss's phone number at Amazon.

Infante's boss, Greg, told Nowlin's sister what a great employee Infante was. He told her that Infante had never missed a day of work, never called in sick, and always went the extra mile for her co-workers.

But Greg also informed Nowlin's sister that Infante had been saving her money to buy a car.

"I haven't had a car in seven years," Infante told KVUE. "I've been riding Capital Metro and using Lyft and my bicycle for seven years."

Meanwhile, from the hospital, Nowlin had been wondering what he could do to help Infante in her life.

"We spoke with her supervisor, who told us that she was one of the best employees he had. She was always early for work and she rode a bus to work every morning. And in some conversation with somebody, she indicated that she had been saving her money to try and buy a car," Nowlin said.

So, Nowlin called up his longtime friend, Rox Covert, of Covert Auto Group.

"That is what I ended up buying from the hospital, talking to Rox Covert and making arrangements for that. And I remember telling him whatever the cost was, just that I'm happy to bear the cost," Nowlin said.

Soon after, Infante received a text from Nowlin.

"And next thing I know, I get a text. I still have it from James. And he said 'Hey, Elisha, you need to contact Rox Covert and you need to pick out a vehicle," Infante told KVUE. "I didn't respond for a day and a half. I was numb. I was speechless. You know, I kind of felt guilty in a way, to even accept this, because people say nurses, doctors, surgeons save lives every day, but who gets granted a vehicle?"

Covert spoke to KVUE over the phone and said Infante deserves it.

"I can sum it up by saying she's the kind of person that gives this game of life everything she has. No if, ands or buts about it," said Covert. "Amazon is so fortunate to have somebody like that."

Elisha now has a new Buick, which she picked up from the dealership, and is grateful. She told KVUE she plans to also use the car to volunteer for Meals on Wheels and do some medical transports for Austin Pets Alive!.

Infante hopes this story sends a message to be kind to one another.

"And especially during this pandemic and during these rough times, you know, we need more kindness right now. And every single day we have a choice to be kind or to not be or to ignore people ... choose to be kind," Infante said.

Nowlin hopes that this story also sends an inspiring message.

"You know, in this day and time, with all the problems they've got going on in this world, it is an indication that there are good people left in this world," Nowlin said.