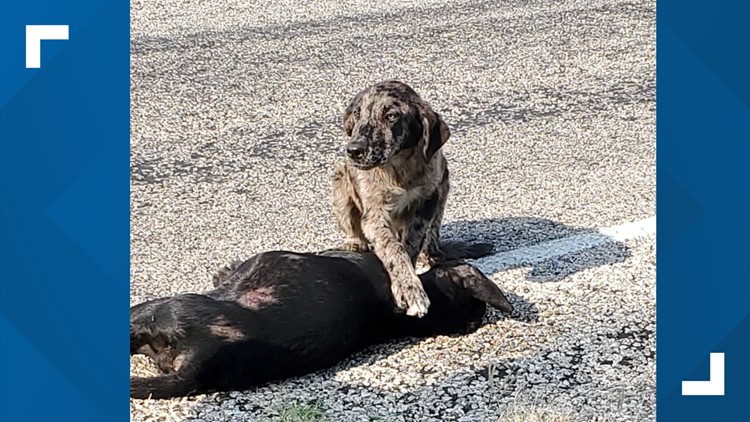 "This boy wasn't going to let anyone mess with his sister. Our Animal Control Officers had a hard time convincing him everything was going to be all right."
Author: Myra Sanchez
Published: 2:43 PM CDT May 23, 2020
Updated: 2:35 PM CDT May 24, 2020

KINGSVILLE, Texas — A heart-wrenching scene unfolded down a desolate road in Kingsville, Texas on Friday morning.

Officials from the Kingsville Kleberg Health Department Animal Control and Care Center received reports of a dead dog on the side of the road.

When Animal Control Officers drove up to the location, a male dog was seen standing by his sister's side like a guardian on the side of the two-lane rural, Texas road.

"This boy wasn't going to let anyone mess with his sister. Our Animal Control Officers had a hard time convincing him everything was going to be all right and they were there to help him,” said officials from the Kingsville Kleberg Health Department Animal Control and Care Center.

Animal Control Officers say this incident sheds light on some of the heart-breaking calls their staff has regularly.

"This call was one of the most heart-wrenching for our staff, but we thought we'd share some behind the scene images of situations they are faced with on a regular basis," added authorities.

According to a social media post, the staff of the Kingsville Kleberg Animal Control and Care Center has decided to name the dog "Guardian".

Officials say Guardian is now at their facility, and he will be held as a stray for a required four days.

After the four days if no owners come forward, officials say Guardian has a scheduled adoption appointment, as someone is eager to welcome this loving boy into their family.

"He is still a little confused about what happened, but at least he is now in a safe place with fresh, cool water and belly full of food. He is listed as a Catahoula Mix and is estimated to be 6 to 12 months old," states Animal Control officials.

Dogs are often known for their loyalty, a natural behavior, and a survival mechanism for their species.

Research shows dogs demonstrate empathy towards both humans and other dogs.

Guardian and his sister have made national news after the post on the Kingsville Kleberg Health Department Animal Control and Care Center's Facebook page went viral and was featured on People Magazine's website.

More from 3News on KIIITV.com: