Miracle in Jacksonville: They said he was brain dead, would never walk, talk again, Mom had faith

He lay in a bed in a coma, unable to do even the simplest of tasks after a horrific motorcycle crash left him with a traumatic brain injury. 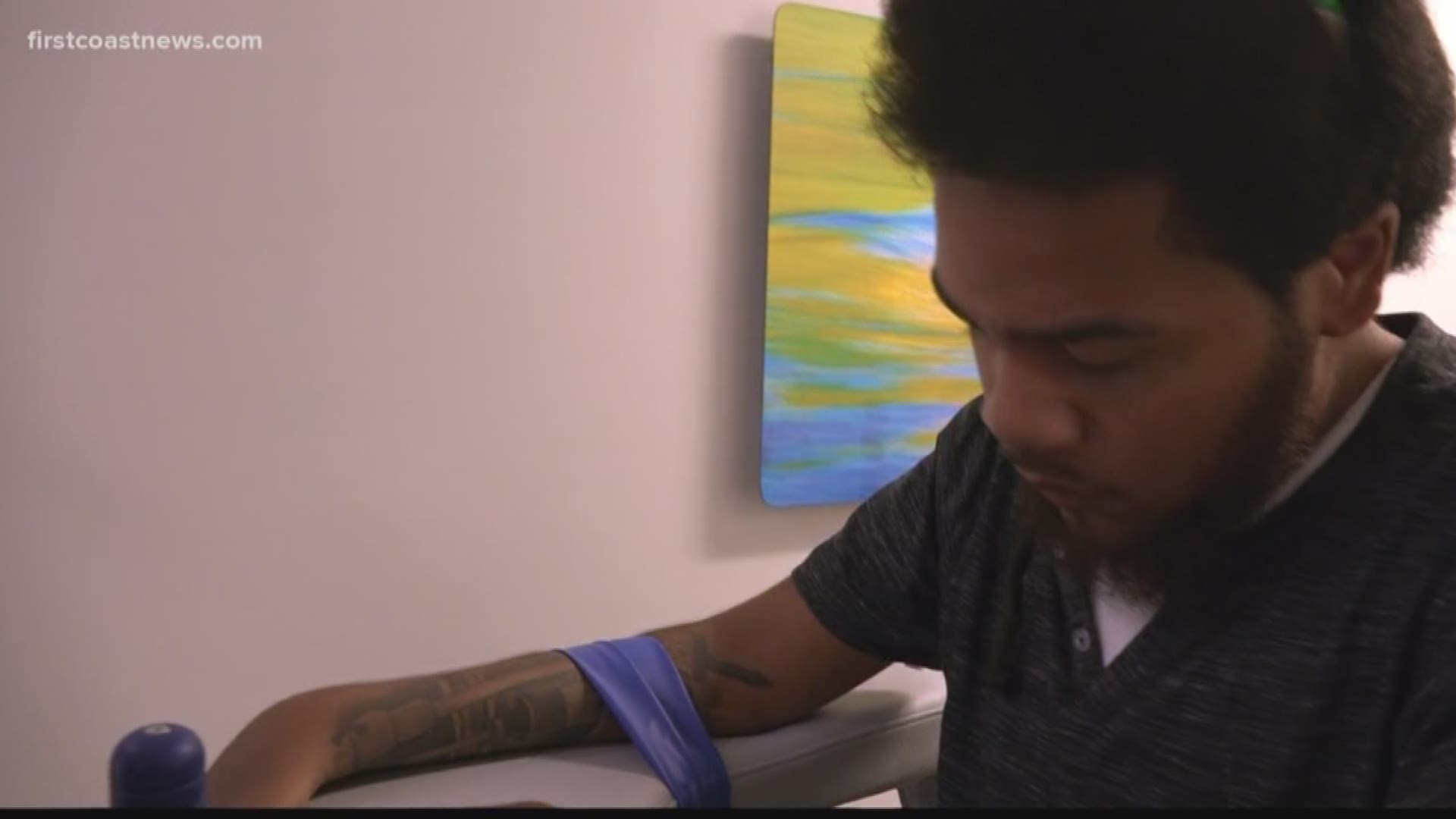 For 244 days Yolanda Osborne-Kohn did not hear her son speak.

He lay in a bed in a coma, unable to do even the simplest of tasks after a horrific motorcycle crash left him with a traumatic brain injury.

From the very beginning she refused to believe her son was brain dead, and fought every single day to get him the care he needed, as she was doing back in November when we first shared their story.

The young man who doctors said would never walk or talk again and his mom are teaching everyone around them to never give up hope.

With his mother cheering him on, Drew Kohn, summons his Iron Man strength and pulls himself up. Ten months ago doctors didn't know if Drew would survive.

"We were told he was brain dead and if he woke up that we should not expect any participation in the world that we know it," said Yolanda. "How are you going to let someone that doesn't know you or know your child give you the determining factors of should that person live or die."

The Oakleaf High graduate and football standout was on his way to the gym when he was sidelined in a life-altering motorcycle accident in Jacksonville.

"In layman's terms it's like taking a handful of rice and throwing it on the carpet and there are just bleeds everywhere. You can't fix it," said Osborne-Kohn.

Just days before Kohn's 23rd birthday his helmet flew off and he landed in the middle of the road with two impaled lungs, a broken shoulder, pelvis and ribs and a traumatic brain injury.

"Every single day was a battle ... it was he's not able to do this, he's not ready, he's not awake, he's having seizures," said Osborne-Kohn.

Despite the grim prognosis his mom never lost faith that her son would one day walk and talk again.

"Your prayers count. That's what I want people to know is that my family is so grateful." said Osborne-Kohn.

After months in a coma as Drew lay in a hospital bed there was a huge breakthrough.

"We played a football game and through heat mapping software we saw Drew's eye saw the quarterback throw the ball and you watched the entire play and that's how we really started realizing drew was emerging and following things with his eyes," said Speech Pathologist Alisha Russell.

Drew was sent home still unable to speak. Then one day as his mother was lifting him in to bed, asking him how he was doing as she did every day.

And then he said the words she had been waiting to hear.

"I love you, mom. He just said I love you mom and it was just a big moment, and it was clear. It was definitive. His voice is really soft like a whisper. It just was OK this is a thinking person," said Osborne-Kohn.

Drew had emerged from his coma.

Five days a weeks he goes to Brook Rehab in Orange Park where he has quickly learned to communicate through a special device that allows him to type to talk.

His mom says he has same personality and still has his sense of humor. Before our interview, he had one specific request, he wanted a McGriddles sandwich.

"In three days drew has mastered the ability to use a keyboard," said his speech pathologist.

"Honestly it's something I have never seen how fast he's progressed. The fact his language is so intact is absolutely amazing from a brain injury perspective from someone who two to months ago wasn't even fully emerged. The fact he can spell and speak in sentences is absolutely amazing progress," said Russell. "I know mom's help and support has really pushed that along."

"One emotional point was he asked me where's my Bible. I said I think it's packed. He said I want to read Psalm 100. and my mind I was thinking I don't know if he can read that," recalled Osborne-Kohn. "I gave it to him and he started reading and when he read Psalm 57 he was crying and I was crying. it was just so powerful like you can't say his mind is not there. Not only did he ask to read a certain scripture but there when you're saying, the Lord is my refuge. Who will I run to? Who is my strong tower?"

It's that faith that Osborne-Kohn believes has lead them to this point.

"All this that is happening is because of that guy up there," said Osborne-Kohn.

It's not been easy. The pain has been intense.

Determined to get out of his wheelchair he fights through the pain and while listening to his favorite song, 'God's Plan', step by step, by sheer determination walks down the hall.