During her time at THV11, she covered hundreds of stories with topics ranging from the state’s takeover of the Little Rock School District, the devasting April 2014 tornadoes, the Bobby Moore trials, and she even traveled to cover the Ferguson, Missouri riots. 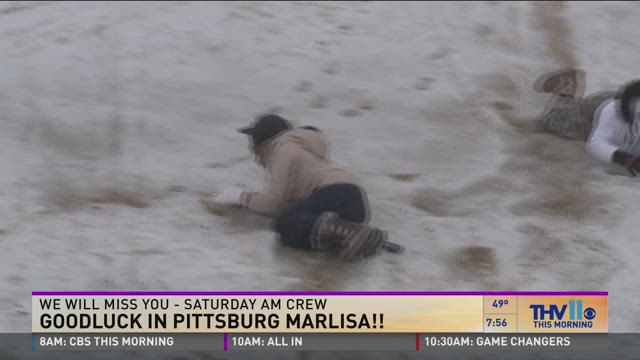 LITTLE ROCK, Ark. — (Editor's note: The attached video is from Marlisa's final day at THV11 in 2016 when she shared with our Saturday morning viewers that she was moving to Pittsburgh.)

THV11 announced this week that Marlisa Goldsmith will return to Little Rock to join the team as evening anchor.

Goldsmith is a former THV11 reporter. She served at the station from 2013 to 2016, before moving to Pittsburgh where she was weekend anchor at WPXI.  During her time at THV11, she covered hundreds of stories with topics ranging from the state’s takeover of the Little Rock School District, the devasting April 2014 tornadoes, the Bobby Moore trials, and she even traveled to cover the Ferguson, Missouri riots.

Goldsmith, a graduate of St. Edward’s University, is also a member of the National Association of Black Journalists.

Earlier this year, Goldsmith received a Robert L. Vann Award of Excellence from the Pittsburgh Black Media Foundation.  Additionally, she is a multi-EMMY Award nominee and her contributions to both THV11 and WPXI helped the stations garner EMMYs in group categories.

The THV11 team is thrilled to welcome Goldsmith back to Little Rock.

She said, “I called Little Rock ‘home’ for years and could not miss the opportunity to return. I can’t wait to get back and be a part of impacting the community I’ve grown to love and care so much about.”

THV11 News Director Dave Parker said, “I’m excited about Marlisa’s return to Little Rock. She understands what’s important to central Arkansas. She’s a creative journalist with a big heart, and will fit right in with the THV11 team.”

TEGNA Inc. (NYSE: TGNA) is an innovative media company that serves the greater good of our communities. With 46 television stations in 38 markets, TEGNA delivers relevant content and information to consumers across platforms. It is the largest owner of top 4 affiliates in the top 25 markets, reaching approximately one-third of all television households nationwide. Each month, TEGNA reaches 50 million adults on-air and 35 million across its digital platforms. TEGNA has been consistently honored with the industry’s top awards, including Edward R. Murrow, George Polk, Alfred I. DuPont and Emmy Awards. TEGNA delivers results for advertisers through unparalleled and innovative solutions including OTT local advertising network Premion, centralized marketing resource Hatch, and G/O Digital, a one-stop shop for local businesses to connect with consumers through digital marketing. Across platforms, TEGNA tells empowering stories, conducts impactful investigations and delivers innovative marketing solutions. For more information, visit www.TEGNA.com.