White River Distillery makes blast from the past: moonshine

Moonshine was once an outlaw's concoction. Now, a company in Gassville is bringing a legal version to stores with a recipe true to form. 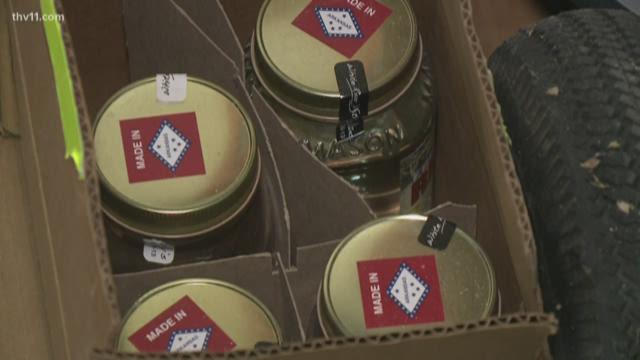 GASSVILLE, Ark. — A small batch distillery called White River Distillery has produced whiskey from their northern Arkansas location to the rest of the state.

“Corn whiskey is a process like they used to do back in the olden days where you use corn or whatever grain you have left from your harvest that you could use as a barter tool,” said Gary Taylor, owner of White River Distillery.

It is similar to the moonshine process. The distillery has mason jars for each whiskey they make. Owner Gary Taylor and his son Jon worked to make it all possible and they learned the process.

Jon is the distiller and said the ingredients are corn, barley, sugar, and water from 550 feet below their property to make the product. Those ingredients then go into the fermenter tank and will get heated up.

“Your ultimate goal is to dissolve all your sugars and to seep the starch out of the corn,” Jon said.

After it sits at almost 200 degrees, it gets cooled back down.

“You transfer is over to these smaller barrels. Then we'll yeast it. Then it'll ferment for about 5 to 7 days,” Jon said.

Then the distilling process is started. The flavor inside the whiskey comes from real fruit. White River Distillery has clear whiskey, apple-infused, cherry infused and dark whiskey which that is infused with oak staves instead of being inside a wooden barrel. The Taylors did a lot of research to make their product.

“We looked up, read, read, read over again. American Distilling Institute has a lot of good information so I read everything I could conceivably find,” said Jon.

It took some trials and errors to perfect it, but Jon said it has been rewarding.

“I'm just glad I can come to work every day and do this,” Jon said.

“To me, it's the history of it. it's a nostalgic thing being in Arkansas,” Gary said.

White River Distillery's corn whiskey is sold in 250 liquor stores in Arkansas.  The name comes from the actual White River which is half a mile away from the distillery. They have won many awards across the country for their whiskey. They can produce nearly 1.000 mason jars of whiskey.