Officer Jason Shuping, 25, was shot and killed Wednesday night in Concord. Police confirmed the suspect also died, and a second officer was injured. 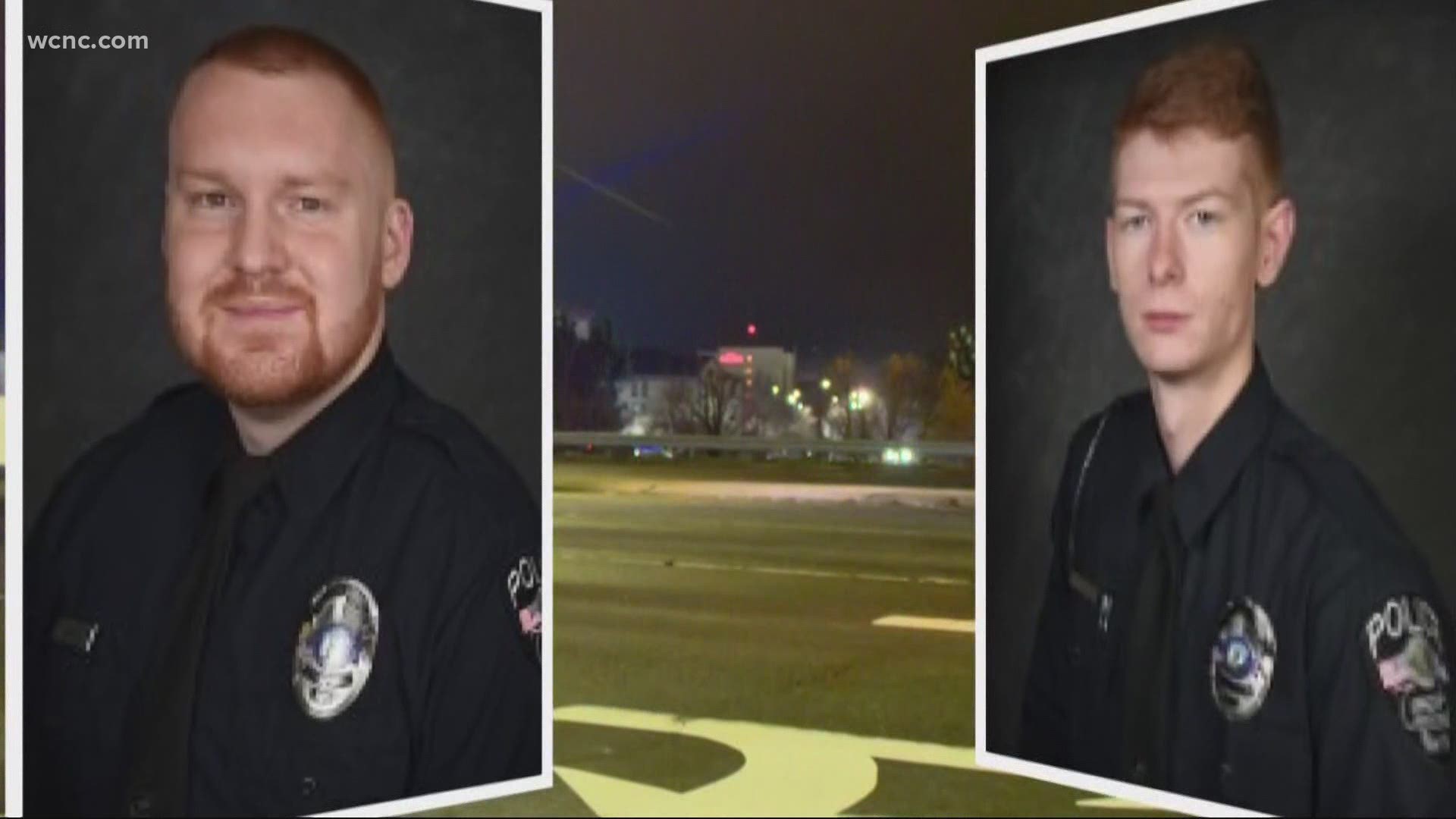 CONCORD, N.C. — A Concord Police officer and a suspect were killed in a shooting near Concord Mills Mall in Concord, North Carolina, late Wednesday night, authorities confirmed. A second officer was also shot and injured.

Jason Shuping, 25, has been identified as the officer shot and killed trying to apprehend an alleged carjacker.

The timeline of the investigation

A woman approached the officers describing a man who had tried to carjack her vehicle. She provided officers with the man's description and said he was last seen running towards a nearby Sonic restaurant.

The suspect's description and last known direction of travel was shared with additional responding officers over police radios.

Officer Shuping, joined by officer Kaleb Robinson and the unnamed ALE agent, located the suspect at the Sonic restaurant, which is located nearby on Gateway Lane Northwest.

As the three approached the suspect, the man fired a handgun, according to Gacek. Shuping and Robinson were both struck by gunfire.

Two additional Concord Police Department officers arrived at the Sonic as the suspect jumped into an SUV belonging to a Sonic employee and continued to fire at police, the chief said.

"The second two officers on the seen saw an officer down [Shuping], obviously in grave, physical condition, and the other officer [Robinson], who was injured and standing nearby, guarding or protecting that injured officer," Gacek said.

Additional gunfire was exchanged, according to Gacek's account. The suspect was shot and killed.

Credit: WCNC
Bullet holes are seen in the side of an SUV outside a Sonic restaurant in Concord, North Carolina as seen on December 17, 2020, the morning after a police officer and suspect were killed in a shooting outside the restaurant.

Investigators at the scene after sunrise Thursday were seen photographing and identifying numerous shell casings and bullet holes.

The officers on the scene

Shuping had been with the department for 18 months.

Officer Kaleb Robinson, 23, was taken to a hospital for treatment of a non-life-threatening gunshot.

The other two Concord Police Department officers at the Sonic, as well as the ALE agent, were not injured. Their names have not been released.

"There's no playbook for this," Gacek said. "Concord Police Department is compromised of a resilient bunch. We're going to get through this. We're a big family.

"This tragic and senseless loss of a member of our CPD family is devastating not only to the officer's family and loved ones but to every law enforcement officer in this city, county, state and country," Gacek continued.

The suspect has been identified as 29-year-old Jeremy Maurice Daniels. Authorities said he was from Charlotte and was a convicted felon.

According to the North Carolina Department of Public Safety, Daniels previously served three years and eight months for conspiracy to commit armed robbery and receiving a stolen vehicle in 2009. He was convicted in June 2010, and his parole ended in February 2013.

"I hope the public can imagine and appreciation the shock, the pain, and the suffering this family is going through right now," Gacek said.

The department is asking the public to join them in praying for those involved. Flags will be flown at half staff. 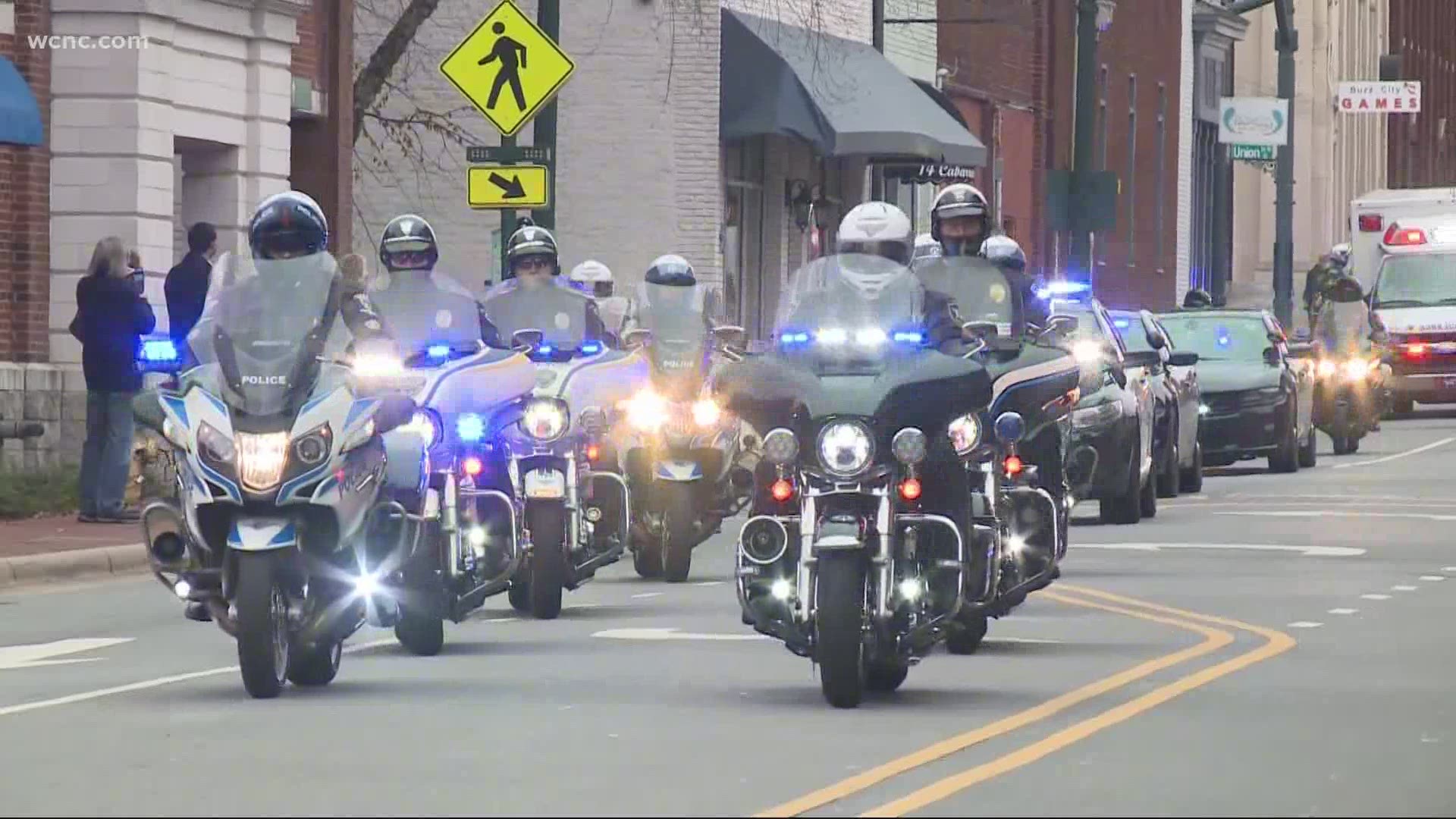 Memorials can be placed outside the Concord Police Department Headquarters at the corner of Cabarrus Avenue and Spring Street, officials said.

Donations can be made in honor of Officer Jason Shuping and Officer Kaleb Robinson to the Fraternal Order of Police:

Checks can be made payable to "FOP Lodge 64" with the designated officer's name in the memo field.

Payments can also be sent via Venmo to @NCFOP64.

Donations can be made in honor of Officer Jason Shuping and Officer Kaleb Robinson.

"Our thoughts and prayers are with the family of the officer we lost, for a full and speedy recovery for the other officer injured, and with all of the men and women who put their lives on the line every day to keep our community safe," the statement read.

On Thursday, people left flowers, stuffed animals and balloons outside the Concord Police Department. Misty Fraley brought her daughters to the memorial to pay their respects to Shuping.

1 / 12
WCNC
Hundreds are showing their respects and mourning the loss of Officer Jason Shuping, including 16-year-old Dylan Ussery. He says he used his Christmas money from his grandmother to buy flowers to lay at a growing memorial.

"It's the only thing we really know to do to just honor him and what he did for us because it's all we can do,” Fraley told WCNC Charlotte.

Linda Hanson stopped by the department on Thursday with a poinsettia in hand to add to the growing memorial.

"It's just very sad that they work so hard and give so much, and their family will be, will be suffering this Christmas season,” Hanson said.

Kathy Leigh, a floral designer with Flowers By Oralene, said the business started receiving calls Thursday morning with requests for bouquets and arrangements with blue flowers.

"It's touching that people care so much that they'll come out and get the bouquets,” Leigh said, “And I've got several orders still to be picked up this afternoon and tomorrow."

UNC Pembroke said in a statement: “We were saddened to learn today of the tragic loss of Jason Shuping, a member of our UNC Pembroke alumni community. The thoughts of BraveNation today are with Jason’s family and friends experiencing this unimaginable loss.”

The UNC Pembroke Track and Field tweeted a memorial as well.

The UNC Pembroke Athletics Department mourns the loss of our former student-athlete and Concord police officer Jason Shuping who was killed in the line of duty on Wednesday evening.

Our hearts are heavy and our thoughts and prayers are with the Shuping family. #BraveNation pic.twitter.com/KrMfmmDOly

This is the third law enforcement death, and the second line-of-duty death, in the Charlotte area in the past week.

Last Friday, Mount Holly Police Officer Tyler Herndon died after he was shot by a suspect during a break-in at the Mount Holly Car Wash, just two days before his Herndon's 26th birthday. Officers from law enforcement agencies across the state showed up at First Baptist Church in Kings Mountain to honor Herndon at his funeral service Tuesday.

"It's tragic incidents like these that serve as a grim reminder that police officers take an oath to serve their community and lay their lives on the line each day to protect the public," Gacek said during Thursday morning's press conference.

Kara Alsup, a 25-year-old deputy with the Rowan County Sheriff's Office, died last Wednesday after an off-duty crash on Interstate 85. 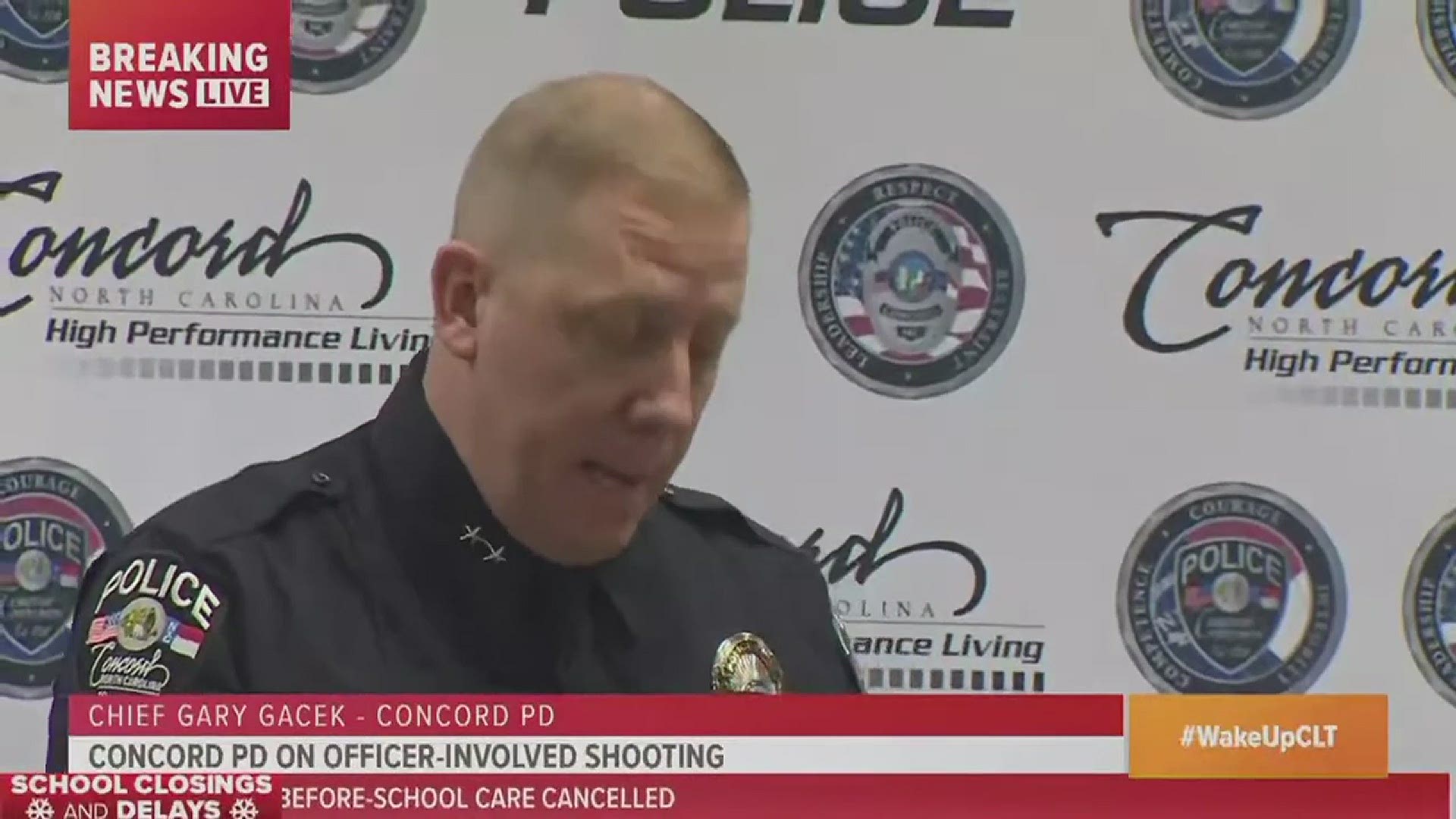