In the video, the suspect could be heard saying "I can't breathe" as officers place their knees and feet onto his back. 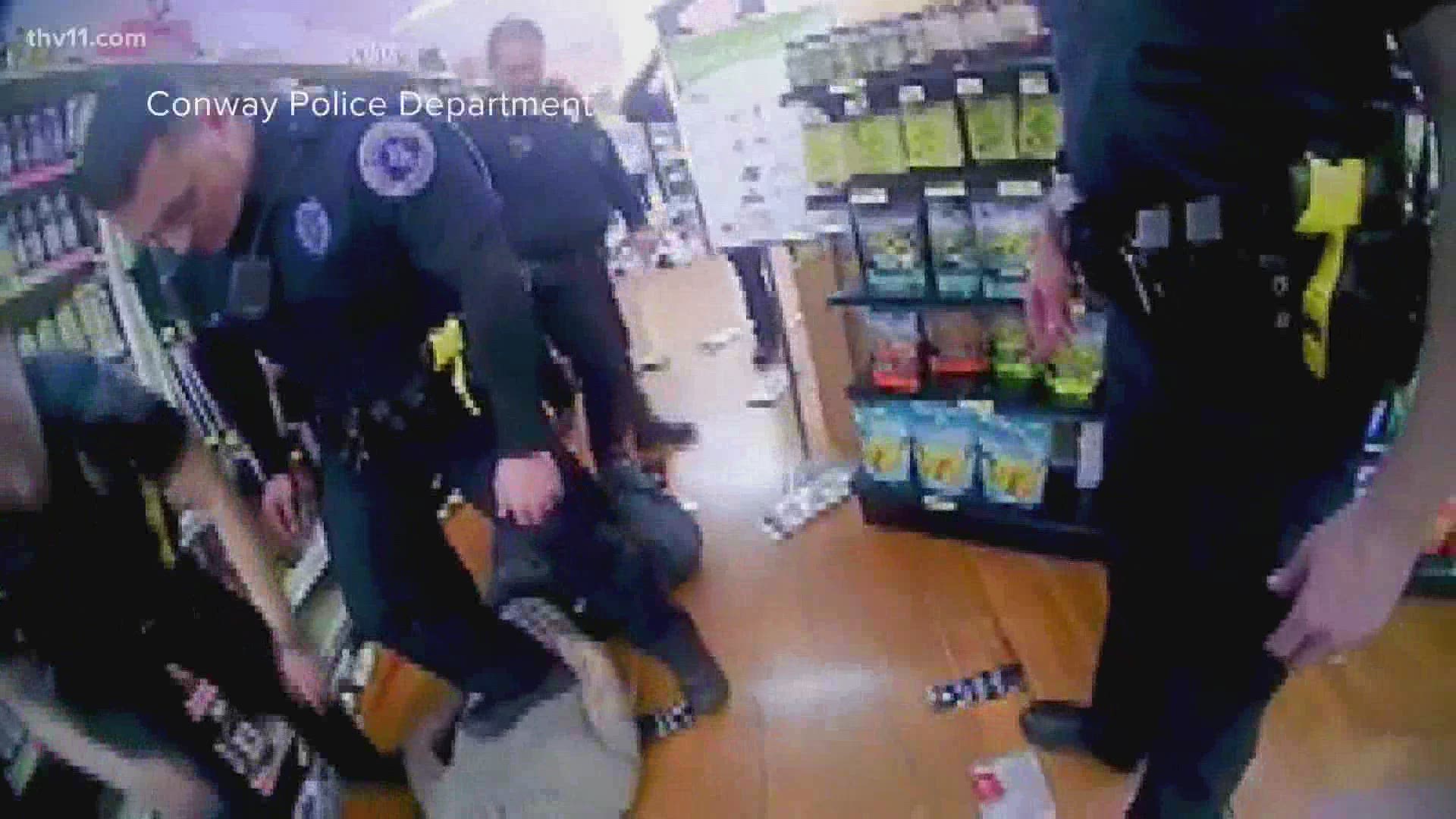 CONWAY, Ark. — The Conway Police Department released the bodycam and security camera video on Wednesday regarding an incident where a suspect died while in police custody on February 4, 2020.

In the videos, Conway police respond to the Harp's store on East German Lane after getting a call about two suspects who removed a drone from its packaging.

Once on scene, officers can be seen on bodycam footage talking to 39-year-old Lionel Morris and another suspect. Morris gives police a fake name during the initial conversation.

While police are placing the two under arrest, Morris runs away and officers take chase after him.

Officers then tackle Morris in a different location inside the grocery store. Police and Morris then begin a struggle that lasts six and a half minutes, according to police.

Morris is tased multiple times before police are able to gain control of him.

In the video, Morris complains about his heart several times and asks for help as he is taken to the ground.

Tapley claimed in the video that Morris reached for a knife clipped to his pocket, but the video cuts to security camera from a corner in the store.

Police say Morris put an officer in a choke hold.

"Instead of using deadly force, the officer grabbed the knife and threw it from the immediate area," Tapley said.

In the edited video, it is not clear when the knife appeared or when it was thrown but the original report said the knife was thrown to a "safe location."

More officers arrive on scene and Morris is placed into custody on the floor of the grocery store.

In the original police report, an officer said that while trying to get Morris to the ground he "pushing his head down" and that "his head inadvertently hit a shelf causing a minor laceration." That same officer also said he tased Morris in the back while he was on the ground in an attempt to gain control of his arms to arrest him.

Another officer admitted to punching Morris two to four times in the back and elbow "in an attempt to gain compliance" in order to gain access to the left arm.

Morris can be heard saying he "can't breathe" while an officer has a knee to his back. That officer says, "If you can talk, you can breathe."

At one point, at least three officers have a foot on him while another officer puts her knee onto his should as he complains that he can't breathe.

According to a report by prosecuting attorney Carol Crews, Morris was allegedly put into a "recovery position" and rolled onto his side. That is never visibly seen on the video release by the Conway Police Department.

In the police report, Morris is moved to the recovery position after he begins to vomit.

When medical personnel arrived on the scene, he was described as being "pulseless and unresponsive."

Morris was pronounced dead at a nearby hospital.

An autopsy was performed and the manner of death was listed as "undetermined."

According to Crews, the autopsy said the cause of death was "methamphetamine intoxication with exertion, struggle, restraint and conducted electrical weapon deployment."

The toxicology report stated he tested positive for meth, cannabinoids, opiates, morphine and amphetamines. The autopsy also said there were "no life-threatening injuries" but noted barb and stun gun sites were found on the torso.

Crews said no criminal charges should be given to the officers involved in the incident.

We have requested the bodycam and security footage from the incident.

Conway Mayor Castleberry released a video statement Wednesday saying he observed things in the bodycam video of the arrest that concerned him and that "there are behaviors that must change."

Castleberry later requested all bodycam and security footage from the incident be released.

RELATED: Conway man dies after police taze him for reportedly shoplifting at Harp's