Three Taylor High School seniors were arrested Wednesday on charges of terroristic threat after students overheard a conversation that the trio were discussing detailed plans to coordinate a shooting at the school involving explosives and firearms. 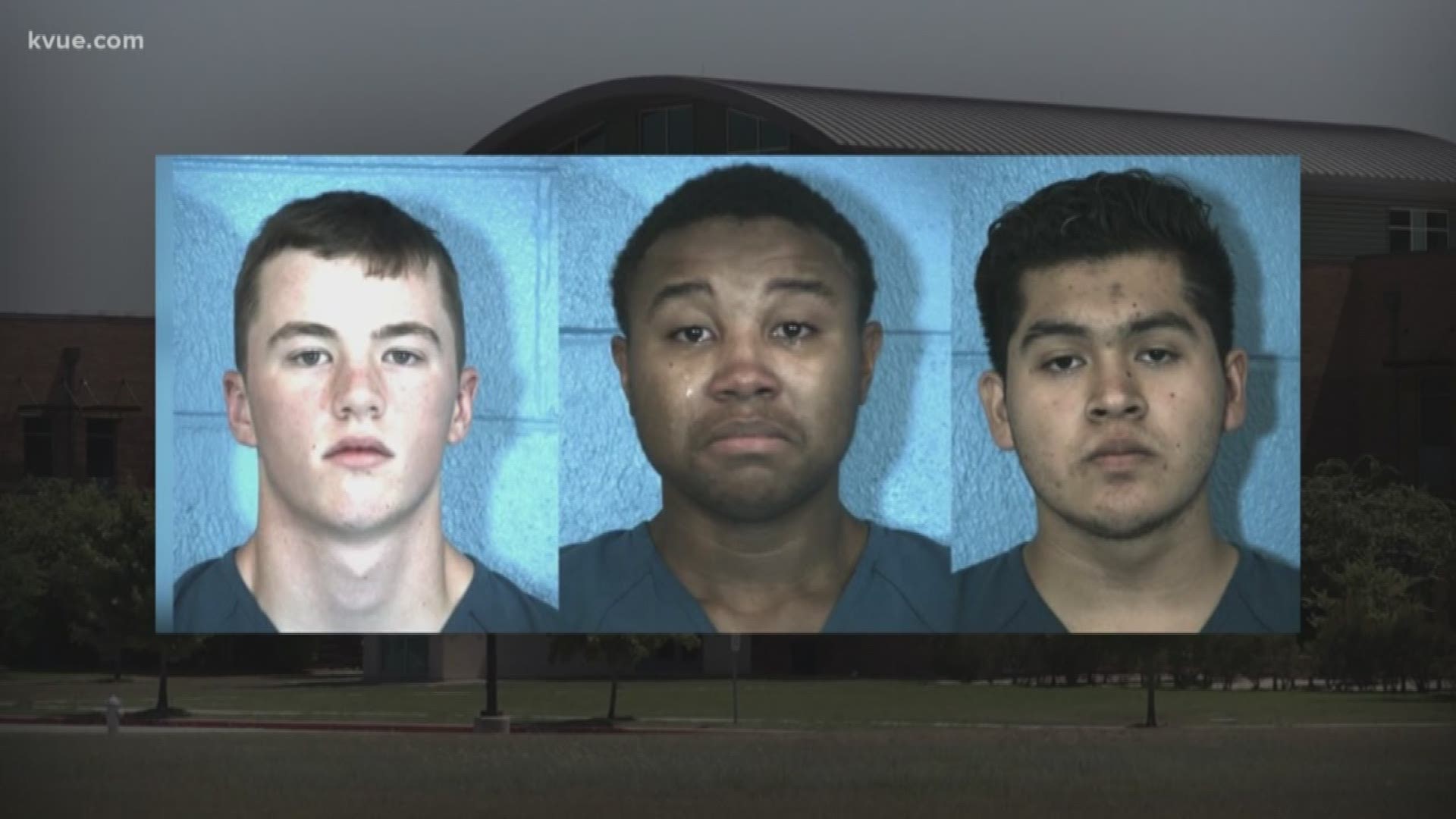 TAYLOR, Texas — Before three teens were arrested for allegedly discussing a plan to shoot up Taylor High School, one suspect said in the classroom that he would make a good school shooter, according to arrest documents.

Police arrested Devant Davis-Brooks, 17, Kadin Watson, 17, and Emmanuel Pina Tejas, 17, on charges of terroristic threat after several students overheard a conversation that the three seniors were discussing detailed plans to coordinate a shooting at the school involving explosives and firearms. Officials said the conversation took place during class and one student reported it.

According to arrest documents for the teens, the vigilant student overheard Davis-Brooks, Watson and Pina Tejas talking and "cutting up" in class. The student told police that Davis-Brooks stated, "I would be a good school shooter, but I don't have a gun." At that point, the student said the classroom got quiet for a moment, and the student admitted to becoming afraid due to recent school shootings.

After hearing the reports of the shooting plans, a Taylor detective and a school resource officer that were on campus were able to quickly investigate the claims and arrest all three of the students.

Police said none of the students possessed any weapons at the time of the arrest.

While investigating the incident, all three teens admitted to authorities that they were discussing school shootings together during class, and Davis-Brooks admitted to making the statement that he "would make a good school shooter."

Pina Tejas told authorities that they were talking about how they would execute a shooting attack at Taylor High School, where it would begin and the time of day it would happen.

Watson reported to police that he had guns the teens could use for the attack and admitted he has access to two rifles and a pistol at his home. The chief of police with Taylor confirmed to KVUE that they searched the houses of the three teens and found guns in one home. The guns belonged to the father -- who the chief described as a responsible gun owner -- of one of the teens.

The police chief also said they did not find any explosives when they searched the homes.

The affidavit states that both Watson and Tejas affirmed to police that they realize school shootings are sensitive topics and inappropriate subjects to discuss during school hours.

Taylor's chief of police told KVUE that they will not tolerate any threats to school safety. He said that even joking about the topic will be taken seriously.

"There are no joking matters when it comes to school safety now, nothing about shooting up a school or blowing up a school is funny," said Taylor ISD Superintendent Keith Brown.

In a letter to parents, the district said they take any report that is threatening to students, staff, and campus seriously.

“We have a small town and to have something like this happen, it’s frightening," said Dustin Smith, a parent of a Taylor High School student.

So, Smith is grateful the school responded so quickly, but he also believes the work to stop these threats starts at home.

"Our schools are great. Our police are great. But at the end of the day, they’re not raising my son," said Smith. "I am."

Since Gov. Greg Abbott's initiatives came out after the Santa Fe shooting, Brown said they've implemented 26 new safety measures in the district. Students are encouraged to speak up and if they see something, say something.

“I am impressed that this incident was reported by responsible Taylor High School students and taken seriously by the Taylor High School administrators," Taylor Police Chief Henry Fluck said. "The high school administrators immediately notified the two Taylor police officers, who were on campus at the time. I am pleased that it was handled swiftly with Taylor police officers being able to effectively intervene to remove the threat and that both students and staff are safe. It is important that the student suspects are being held criminally accountable for their threats and their violent plan.”

"Obviously they'll appear in court, the grand jury will have an allegation to these young men," Judge Baird said. "The gentlemen could be confined in their homes, which could provide a burden to their families."

Judge Baird said that the students could be placed in home confinement until they have a set court date for trial.

All three students were taken to the Williamson County Jail, where they were booked and charged with terroristic threat -- a Class B misdemeanor.

A Class B misdemeanor could result to six months of jail time and the Taylor Independent School District will now have to decide what disciplinary action they will take.