The officers were shot as they responded to a domestic disturbance call at an apartment on Tuesday morning. 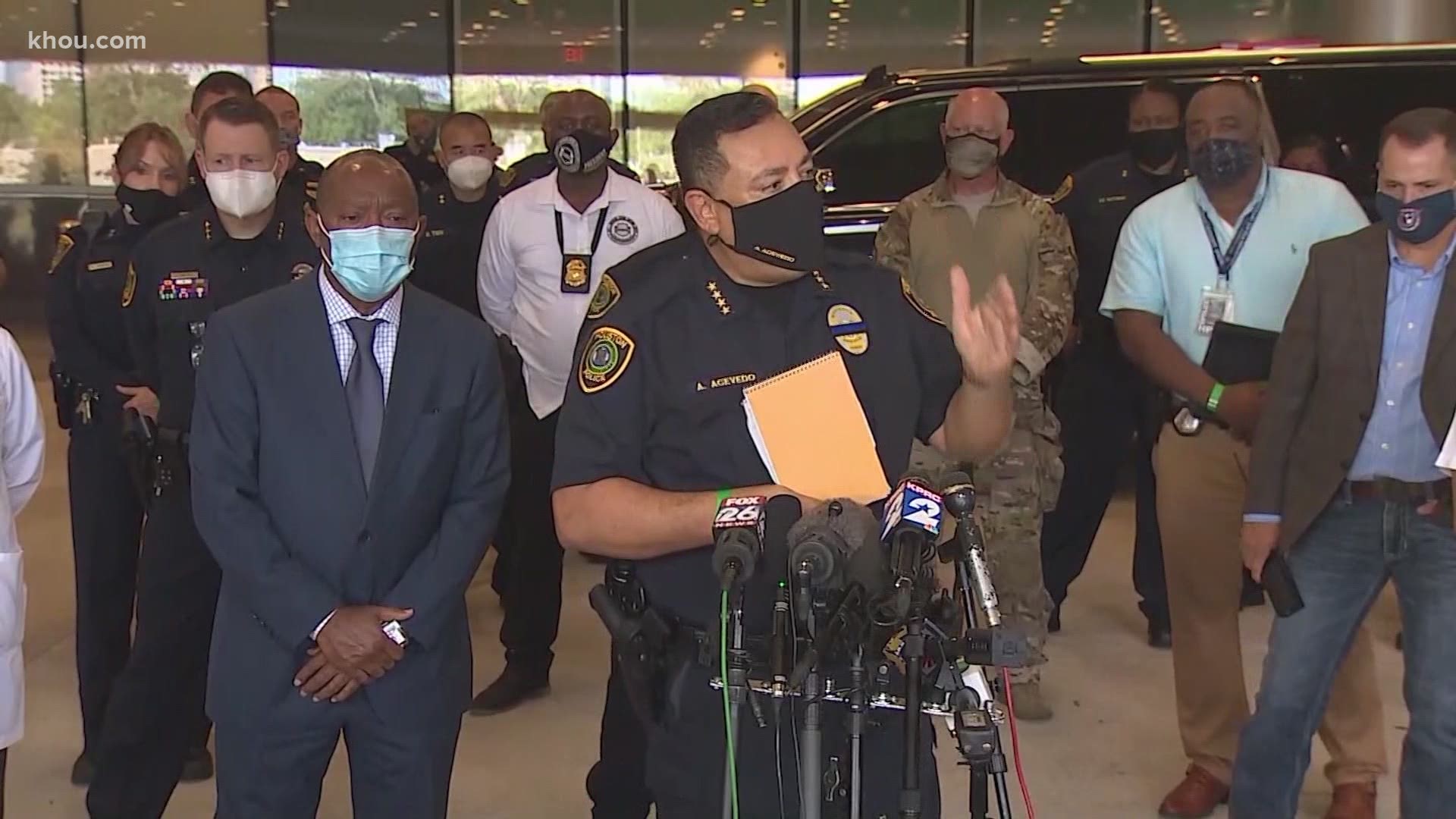 HOUSTON — Houston Police Sgt. Harold Preston died after he was wounded in a shooting at an apartment complex Tuesday morning. He was one of two officers shot during a domestic disturbance call.

The chief said Sgt. Preston was surrounded by family before he succumbed to his injuries. He served as a police officer for 41 years.

RELATED: HPD Chief: Witness risked his own life twice to make sure surviving officer stayed out of harm's way

“We lave lost a wonderful human being,” the police chief said.

HPD Officer Courtney Waller has been identified as the other officer who was injured in the shooting. He was shot in the arm. The chief said Officer Waller is a twin.

“In the last week, we have lost two very good men... There’s some real evil in this world,” the police chief said. This is just days after the Houston Fire Department lost one of their own, Arson Investigator Lemuel Bruce.

The suspect has been identified as Elmer Manzano, 51. Chief Acevedo said Manzano has a long criminal history, but did not elaborate.

Manzano was shot in the abdomen and was transported to Ben Taub Hospital.

The 14-year-old son of the suspect was also shot during the incident and was transported to Texas Children's Hospital, the chief said. He is expected to be OK.

The police chief said it all started when HPD received a call just before 8 a.m. of a domestic disturbance with an unknown weapon in the 2600 block of Holly Hall.

Officer Waller and Sgt. Preston -- as well as another officer -- responded to the scene. The officers met with complainant, who was the estranged wife of suspect.

The officers talked with her in parking lot for about an hour. Acevedo said the woman wanted to get her belongings and move out.

Acevedo said that just before 9:30 a.m. the suspect’s son opened the door with his keys to the apartment and told officers the suspect had a gun.

The suspect then shot multiple rounds at the officers.

We have had two officers struck by gunfire. Please pray! More to follow.

“He’s walking towards me. He says, ‘man, get my gun. Get my gun,'" said Travis  Bryant, who saw Officer Waller bleeding from his arm.

LISTEN: 'We're coming to you' | Calls from scene where 2 HPD officers were shot describe chaos, severity of incident

Bryant said he heard his fiancée asking someone if they were okay. When he saw it was Officer Waller, he ran downstairs to help.

Then a call was out out to assist the officers.

“That’s when everything got crazy. Officers started showing up with rifles. I told my fiancée and she looks at me and she’s like, ‘we need to get in the house,'" said Bryant.

The responding officers were then able to remove Sgt. Preston and Officer Waller from the scene to be transported by an ambulance.

A good Samaritan who was nearby heard the gunshots and assisted with helping pull the wounded officers out of the line of fire.

"Two of our officers have been shot and being transported to the hospital, please keep them and all of our officers in your thoughts and prayers, we need them right now."

From her balcony, Risha Johnson watched as Houston police surrounded her neighbor’s apartment.

“They told us actually to go back inside because it was escalating,” Johnson said.

The suspect then surrendered just before 10:30 a.m., the chief said. An elderly female also came out of the apartment at that time.

Neighbor Risha was getting ready for work when she says she heard about a half-dozen gunshots. A shooting/stand-off was happening right outside her balcony and Richmond Manor apts. We’ll hear from the neighbor on #khou11 a noon. pic.twitter.com/7m8RUdN1Hz

“This was crazy," said Bryant. "We thought it was going to be a random, normal Tuesday, and this just shook us.”

Sgt. Preston was two weeks away from retirement, according to the police officers' union.

Chief Acevedo said in a news conference on Tuesday that they would soon be planning his funeral.