An attorney for Little Rock police officer Charles Starks says that his client has been cleared by the Pulaski County prosecuting attorney and will not face charges for the fatal shooting of Bradley Blackshire. 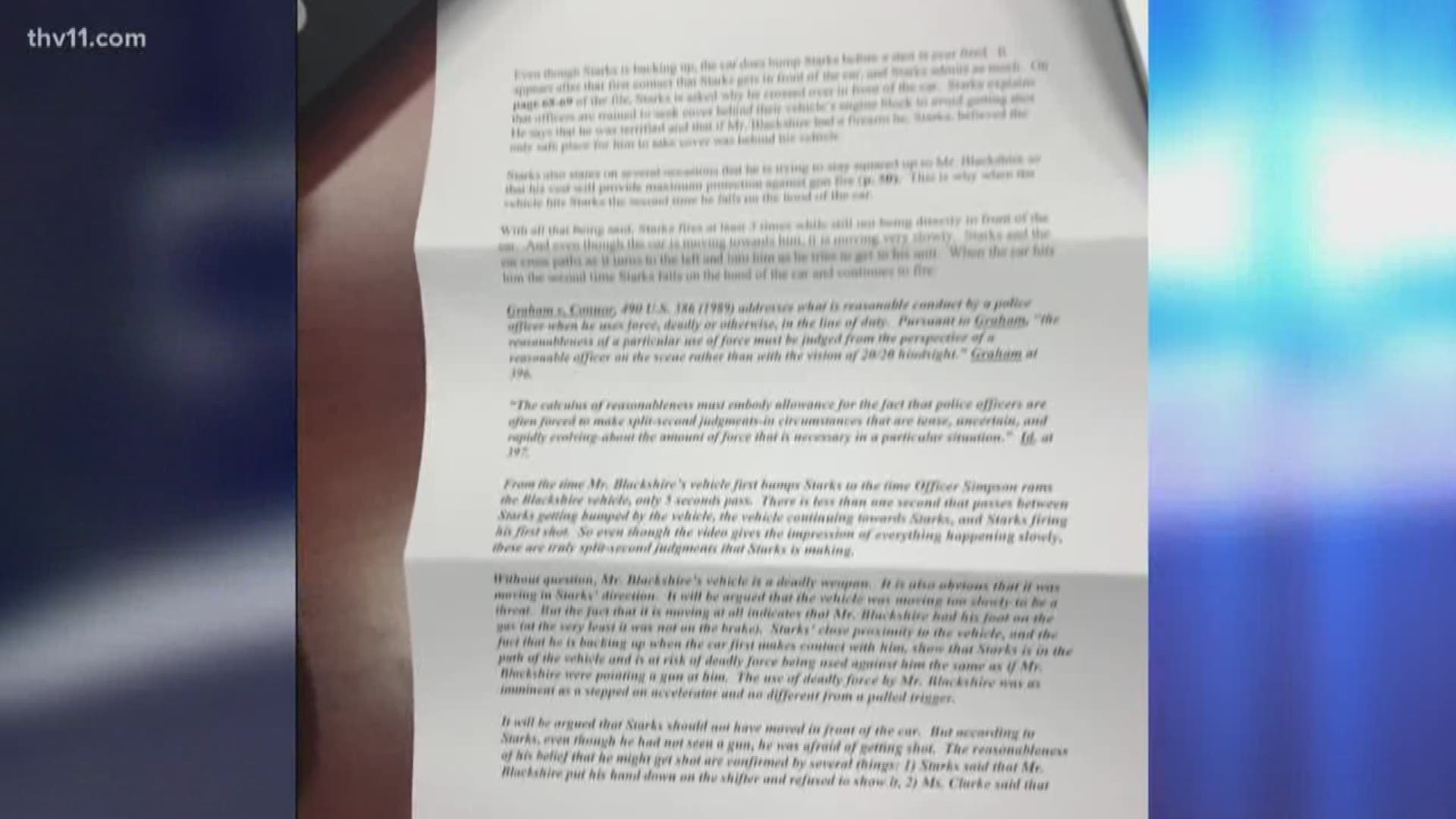 An attorney for Little Rock police officer Charles Starks says that his client has been cleared by the Pulaski County prosecuting attorney and will not face criminal charges for the fatal shooting of Bradley Blackshire.

On February 22, Blackshire was shot and killed by Starks during a traffic stop near the intersection of 12th Street and Rodney Parham Road.

That's when Starks shot at the driver side of car while in front of the moving vehicle. Starks shot several more times while on the hood of the car, firing more than 10 shots.

Attorney Robert Newcombe said he "felt from the beginning that there was no criminal conduct."

"It's unfortunate that a man had to die, but he made a choice," Newcombe said. "If he had just gotten out of the car like he was ordered, we wouldn't be having this conversation."

Newcombe said Starks is "relieved and pleased" with the decision.

In a letter to Chief Humphrey, Pulaski County Prosecuting Attorney Larry Jegley said the woman in the car with Blackshire told police that he was "digging around in his pocket" where she said he normally keeps his gun. Starks says he saw Blackshire move his hand down to put the car in gear, but said he "couldn't tell if Mr. Blackshire was reaching for something."

The woman also reportedly told police officers that Blackshire told her he shot "at the police on a previous occasion."

Jegley said that Starks had "reasonable cause to believe that" Blackshire committed a felony.

"Even though Starks is backing up, the car does bump Starks before a shot is ever fired," Jegley said.

Jegley said in the letter that Starks said officers are "trained to seek cover behind their vehicle's engine block to avoid getting shot." Starks explained that he was terrified Blackshire had a gun and Starks believed the "only safe place for him to take cover was behind his vehicle."

"Without question, Mr. Blackshire's vehicle is a deadly weapon," Jegley concluded. "It is also obvious that it was moving in Stark's direction. It will be argued that the vehicle was moving too slowly to be a threat. But the fact that it is moving at all indicates that Mr. Blackshire had his foot on the gas (at the very least it was not on the brake)."

Jegley said Blackshire's "use of deadly force" was "as imminent as a stepped on accelerator and no different from a pulled trigger."

Police reportedly found a loaded .45 caliber handgun inside the vehicle and .45 caliber cartridges were found in two of Blackshire's pockets.

On Tuesday, a group protesting the officer-involved shooting spoke with Chief Humphrey on the issue. Organizers called for Starks' termination from the police force as well as the use of body cameras by LRPD.

"I just pray that there are charges filed against the officer that killed my son because we feel that it was unjust," said Kim Blackshire-Lee, the mother of Bradley Blackshire.

In a press release, the Little Rock Police Department said an internal investigation has been completed and will be delivered to Chief Keith Humphrey. The final decision will take "approximately" two weeks.

We will continue to update this article with new information.