Minor weed offenses could become the lowest priority for Little Rock police if a city director's proposal is accepted. 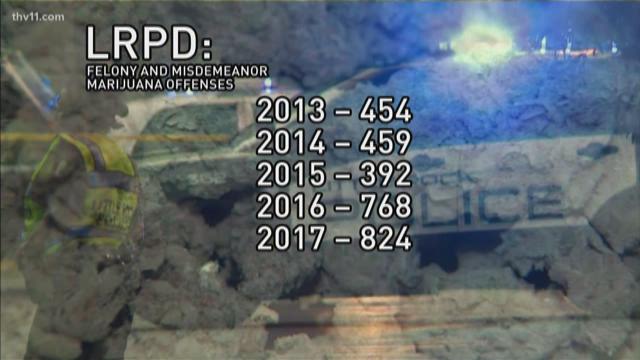 "These arrests are impacting people’s ability to get employment," Richardson said.

Richardson wants offenders of minor marijuana charges to have more opportunities for well-paying jobs. He also believes these charges add to overcrowding jails if the offender can’t pay bail.

"This is not an attempt to micromanage the police department, this is a policy decision to hopefully help reconnect people to our society," Richardson said.

His proposal would make investigation, citation and arrests for misdemeanor marijuana offenses the lowest priority of Little Rock police. The rule would not affect how offenders are prosecuted.

- possession without intent to distribute of less than 4 ounces

- possession with intent to distribute of less than 14 grams

- manufacture of fewer than 14 grams

intent to distribute is assumed if a person meets any one of the following requirements:

(2) The person possesses a record indicating a drug-related transaction

(6) Other relevant and admissible evidence that contributes to the proof that a person's purpose was to deliver a Schedule VI controlled substance.

He said he doesn't think

According to Little Rock police, minor marijuana offenses are already a low priority.

“Go ask any cop out on the streets," Jegley said. "Do they see it? Yea. Do they make it a priority? No."

Little Rock police provided the number of marijuana-related charges over the past several years. These numbers had to be pulled from two different sources. The 2013 to 2015 figures come from our submission to Arkansas Crime Information Center. The 2016 and 2017 figures were queried out of the police department's Records Management System. This could partly explain the drastic increase. There is no distinction between felony or misdemeanor offenses in these figures.