In a criminal complaint prosecutors detail charges of criminal vehicular operation and threats of violence-reckless disregard against Bogdan Vechirko. 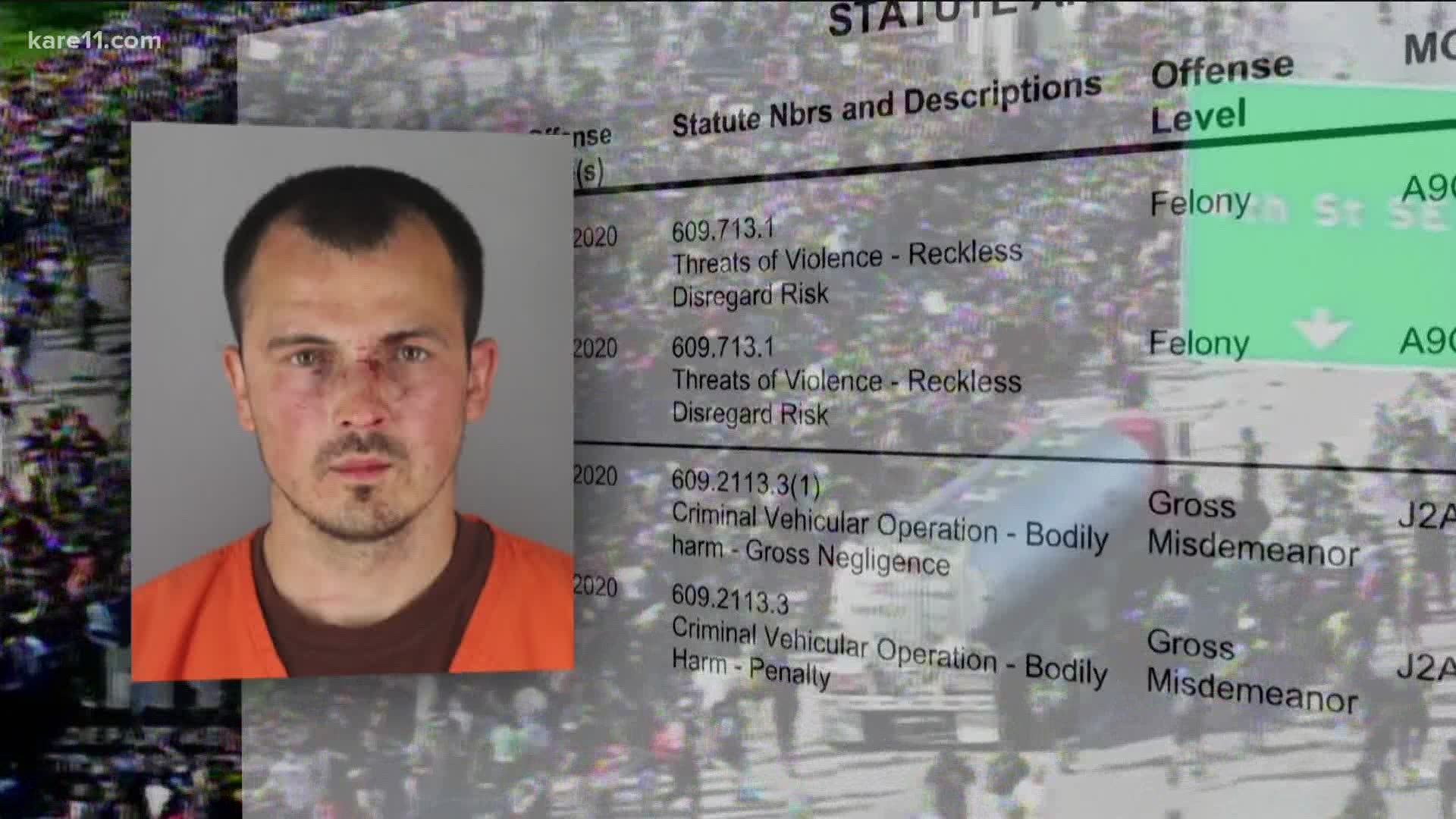 MINNEAPOLIS — Criminal charges have been filed against a 35-year-old truck driver in connection with an incident this summer on the I-35W bridge when he drove into a crowd protesting the death of George Floyd.

In a criminal complaint prosecutors detail charges of criminal vehicular operation and threats of violence-reckless disregard against Bogdan Vechirko of Otsego.

Vechirko was behind the wheel May 31 when the semi he was driving sped into the crowd of hundreds, horn blaring. The scene was captured on traffic cameras and video shot by people on scene, and viewed hundreds of thousands of times on social media platforms.

Amazingly, no protesters were struck or injured, a fact authorities called "a miracle." The truck eventually rolled to a stop and the crowd surrounded Vechirko. Prosecutors say the trucker didn't stop until "an individual stumbled and fell, compelling the driver (Vechirko) to stop."

Vechirko's defense attorneys issued a statement on Thursday saying in part, "He saw the crowd start to clear and relied on his professional instinct and training to avoid a hard brake that could have jackknifed the truck and could have seriously injured or killed thousands of people, and instead slowed his vehicle while maneuvering through the parted crowd."

The statement went on to say, "This scenario could have been incredibly tragic if not for Mr. Vechirko’s actions. It is difficult to comprehend how Mr. Vechirko’s conduct has now resulted in him being charged with a felony."

At the time of the incident authorities reviewed traffic camera footage – and questioned Vechirko – then said it appeared he came up on the protest by accident.

“We don’t have any information that makes this seem like this was an intentional act,” said Minnesota Public Safety Director John Harrington at the time. “It wasn’t that he went around the barricades to get to the protest.”

But in the criminal complaint filed in Hennepin County district court, prosecutors say a thorough investigation showed Vechirko wanted to scare protestors out of his path. Detectives went through both traffic camera footage and videos shot by witnesses at the scene. They even secured a semi similar to the one Vechirko drove that day and recorded a re-enactment of what unfolded on the bridge. Investigators say the video made it clear the defendant’s line of sight would have given him sufficient time to stop his truck after viewing the crowd.

Prosecutors allege that Vechirko acknowledged to investigators that he could have stopped the truck sooner.