"This is scary that somebody is choosing to put a symbol this hateful out into our community in a very threatening way." 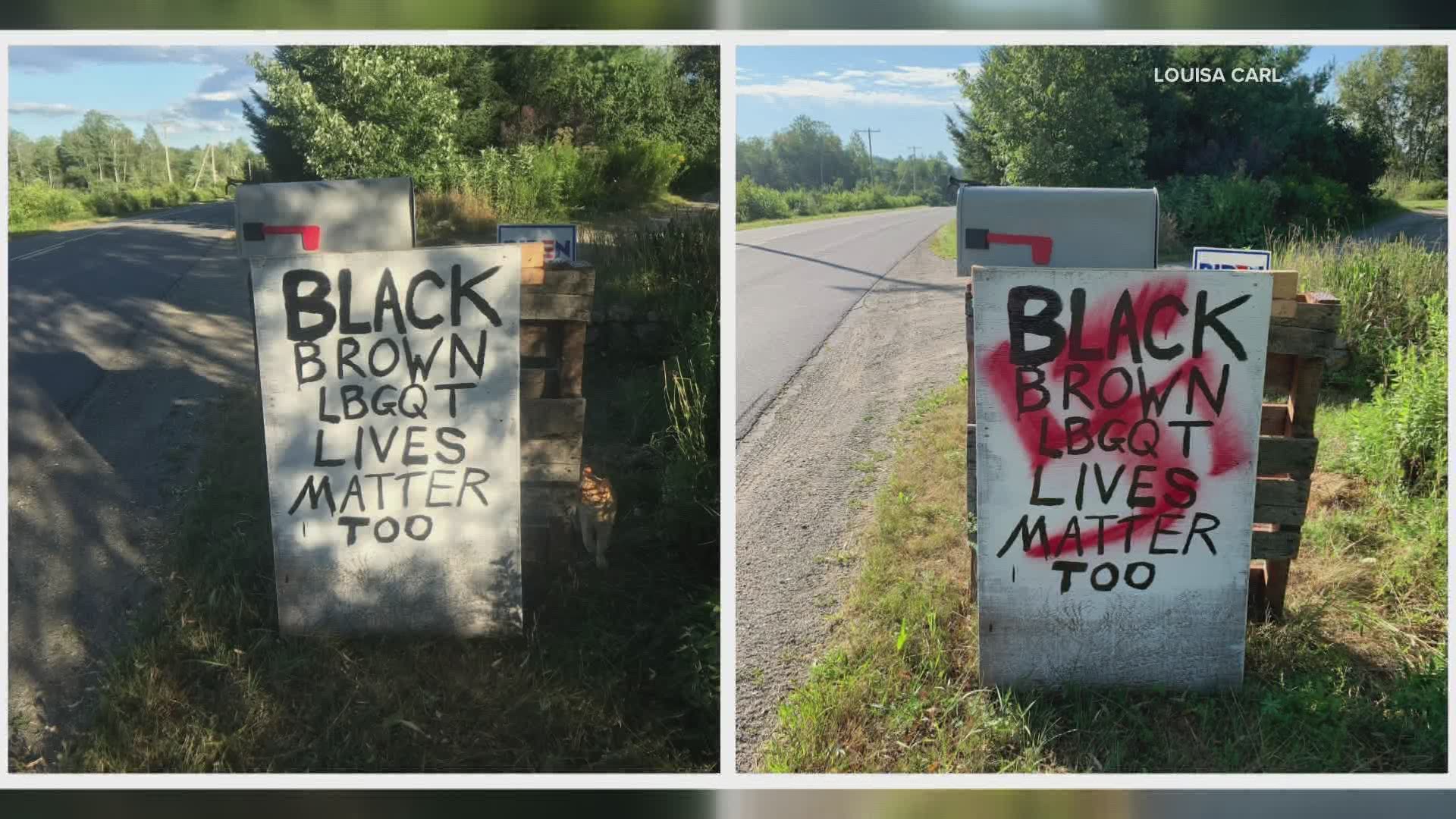 WALDO, Maine — A woman who lives on Poors Mill Road in Waldo said a sign at the end of her driveway reading 'BLACK BROWN LBGQT LIVES MATTER TOO' was vandalized with a swastika.

Louisa Carl, who is white, is the mother of two black sons. She worked with her 16-year-old, who has been an active participant in the Black Lives Matter movement, to construct the sign - which is actually the second one they put up. Carl said the first, a 'Black Lives Matter' yard sign, was stolen in late July after it had been up for about two weeks.

"When that sign was taken, my son really wanted to make a new sign and just reiterate the point that his life matters, his friends' lives matter, all these people who are getting harassed and killed by cops, their lives matter," Carl said. "That's really all we're saying here. It's not a complicated message."

Carl said she and her son then decided to make a more substantial sign to replace the one that was stolen. They made it out of a pallet and a piece of plywood, and installed it on Monday, August 3.

On the morning of Saturday, August 8, a neighbor alerted them that the sign had a red swastika spray-painted on it.

Carl then contacted Maine State Police, and said Trooper Einar Mattson was at her door within a half hour. After explaining the situation to Mattson, Carl said she woke her son up and showed him the vandalism. She said he and his friends, some of whom are also of color, are disturbed by it.

"They're really upset about this, obviously," Carl said.

Carl said her son then asked if she thought it could be one of their neighbors. She told him she doesn't know but that it's entirely possible.

"He was like 'oh my God' that's really scary. And I was like 'yeah, agreed,'" Carl said. "This is scary that somebody is choosing to put a symbol this hateful out into our community in a very threatening way."

The side of the sign that wasn't defaced with a swastika had seemingly random red spray paint on it. Carl and her son have since turned that spray paint into a red heart.

As for the swastika side of the sign, Carl said she and her son are still discussing what they want to do.

"I kind of want to leave it up for a while and I'm thinking about putting up a sign saying, 'Okay, are we okay with someone in our community doing this?'" Carl said. "I don't know what we're going to say exactly but I think we're going to make another sign and put it next to it."

A Maine State Police spokeswoman told NEWS CENTER Maine that the agency is investigating, but declined to share more details because of the ongoing inquiry.

"I think there's this perception in Maine that there's no racism here and that there's no people of color here, neither of which are true," Carl said. "We need to wake up to what's happening around us and happening in our communities and figure out how to deal with it."