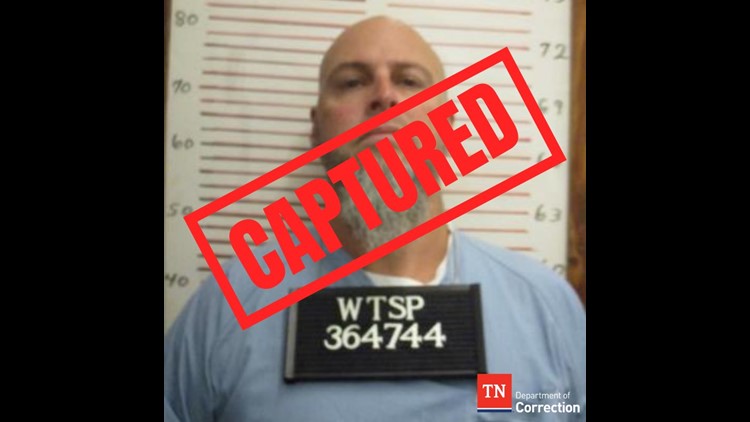 UPDATE: The Tennessee Bureau of Investigation tweeted just after noon Sunday that the West Tennessee State Penitentiary inmate who escaped Wednesday morning is now in custody.

After being caught on surveillance video early Sunday morning, Curtis Watson has been captured.

A homeowner in Henning spotted Watson on their property around 4:30 a.m. eastern time. Henning is in Lauderdale County, about an hour north of Memphis and an hour west of Jackson.

The department posted two photos from security camera footage from the person who notified authorities.

The department noted he has changed clothes, appeared to be dressed in camouflage bib overalls and was carrying a camp backpack.

RELATED: "He could be anywhere" | Search still on for "extremely dangerous" escaped Tennessee inmate, reward increases to $57,000

Watson is accused of killing and sexually assaulting a Tennessee Department of Corrections employee, Debra Johnson, and faces charges in her death. He was serving 15 years in the West Tennessee State Penitentiary for aggravated kidnapping when he escaped Wednesday morning.

On Saturday, the TBI said it had received 369 tips and no credible sightings. This is the first confirmed sighting announced by authorities.

Our sister station WMC in Memphis reported authorities formed a perimeter Saturday around a wooded area on Highway 371 - where they thought Watson was hiding. People who live in the area say at one point - it looked like they were closing in on him.

The Tennessee Bureau of Investigation reports reward money for an arrest and conviction has now reached $57,000.