U.S. Marshals offering up to $15,000 in rewards for Jefferson County jail escapees

The Marshals are offering a reward of $10,000 for information leading to the apprehension of Gullett and $5,000 for Sanderson. 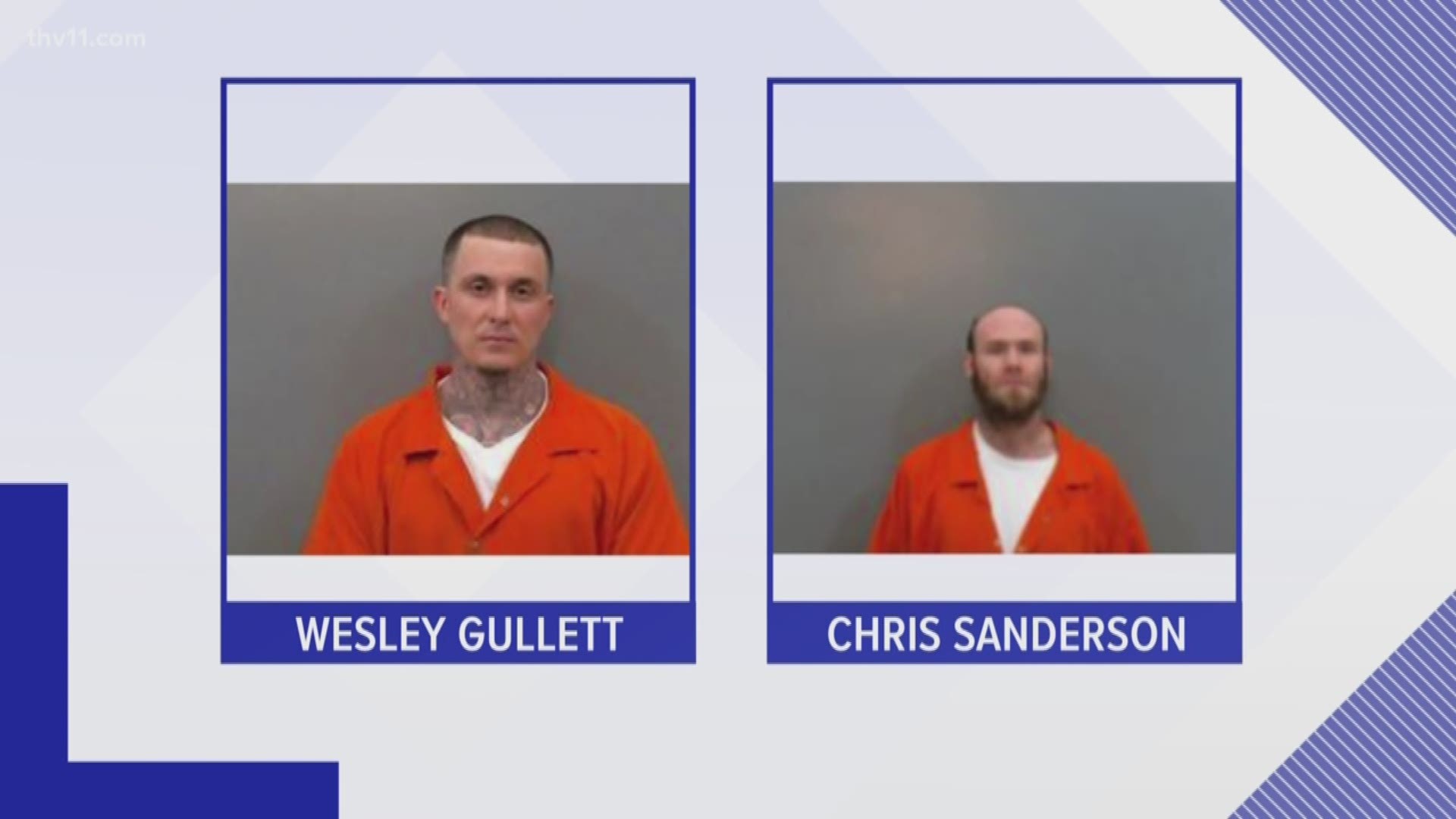 LITTLE ROCK, Ark. — The U.S. Marshals are offering rewards of $10,000 and $5,000 for information leading to the apprehension of two escapees from Jefferson County Jail in Arkansas.

Wesley Gullett, 30, and Christopher Sanderson, 34, escaped from the Jefferson County Detention Center. According to the Jefferson County Sheriff, the inmates could have escaped between 12 a.m. Monday and 1:15 a.m. Wednesday morning. The U.S. Marshals Service was notified at 4:30 a.m. and joined the search.

The Marshals are offering a reward of $10,000 for information leading to the apprehension of Gullett and $5,000 for Sanderson.

RELATED: Sheriff says Jefferson County inmates could have escaped as early as Monday

Gullett has brown hair, brown eyes, stands at five-foot-ten, and weighs 210 pounds. His federal charges include aided and abetted attempted murder in aid of racketeering, aided and abetted assault with dangerous weapon in aid of racketeering, conspiracy to possess with intent to distribute and to distribute methamphetamine, and conspiracy to violate RICO.

Both should be considered armed and dangerous.

Sheriff Lafayette Woods said Wednesday evening that the two men placed "dummies" in their beds and guards failed to thoroughly inspect their cells on at least one occasion between Monday and Tuesday.

“At that point in time, what should’ve happened is, actually, they should’ve physically went in, maybe touched the bed, actually confirmed what they suspected, which is: thought it was a real, live body," Woods explained, "and determined it was not, it was a dummy that was covered up. And so, in that instance, you can’t determine it unless you’re physically putting your hands on an individual. And that’s the proper way checks should be done at all times.”

Woods said he knew the method Gullett and Sanderson used to escape, but would not divulge that information until he was confident the issue had been resolved.

“The takeaway from this is—beyond having our federal partners assist us with getting these guys back in custody, but beyond that—really identifying what those, actually, vulnerabilities are," Woods stated, "and making sure we can correct those as we move forward, to make sure we can minimize the threat of this ever happening again.”

Woods conducted a walkthrough of the jail Wednesday afternoon. He said he identified policies and procedures that can be improved, as well as locations in which he would like to install new cameras. He said he already communicated with the chairman of the Jefferson County Quorum Court's Public Safety Commission about finding money to make those changes.

“Plugging some of the blind spots that we think are blind spots," Woods said, "and that may aid somebody in a will to be able to leave this facility.”

Neither Gullett nor Sanderson was arrested in Jefferson County. Woods said his jail is one of several around the state that will house inmates from other counties while they await federal trials. He said Jefferson County can house as many as 36 at a time and has never had a problem with any of them before. He hopes Gullett and Sanderson return to Jefferson County and to his custody soon.

“We have a fundamental responsibility," Woods said, "when somebody’s locked up, to keep them locked up, again, until the court says otherwise.”