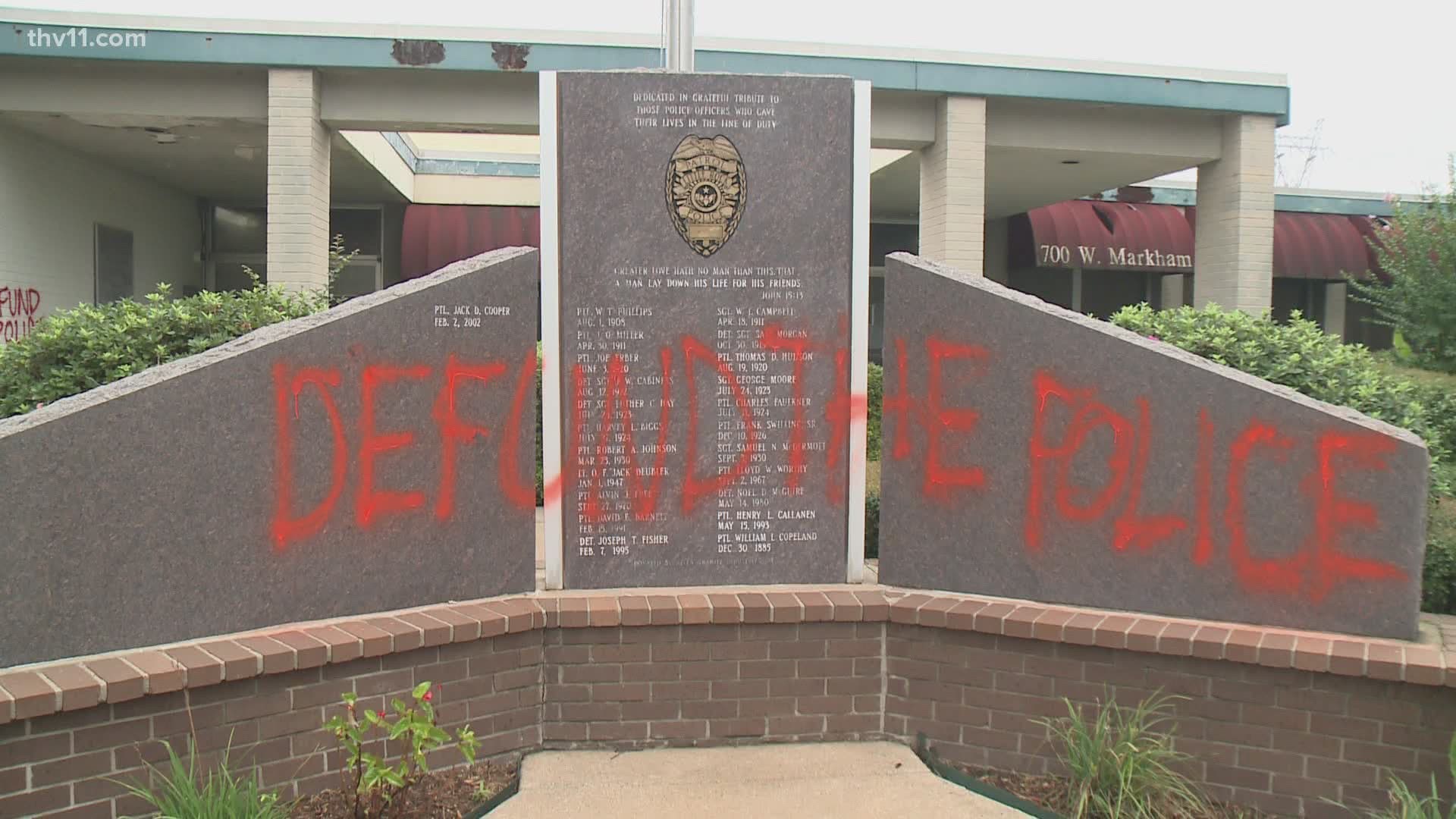 At approximately 3:04 a.m., officers were called to the location near the Little Rock Police Headquarters. Officers arrived on the scene and observed the words "Defund the Police" spray-painted on the police memorial. Those words, along with "Breonna Taylor"  were also painted on the sidewalk in front of the building.

While searching the area, officers discovered the court buildings had been painted as well as two Little Rock police vehicles. The words "Charge Killer Cops" were also painted on the side of the prisoner transport van.

As they approached the fire to investigate, they found one NLRPD Patrol Ford Explorer in flames. The officers also noticed that the tires to several other patrol vehicles had been slashed and were flat.

In total, four patrol vehicles were damaged with one being a total loss.

The Little Rock Fraternal Order of Police released a statement regarding the incident:

"Last night criminals decided to deface a memorial to officers who gave the ultimate sacrifice in service to the citizens of LR and to the very same freedoms that allow protesters the right to free speech. This despicable act is disrespectful to their families and their memory."

A group of people is working to remove graffiti on the Fallen Officers Memorial outside @LRpolice headquarters. #arnews @THV11 pic.twitter.com/X1b0j3d1Ad

In the 9:30 a.m. press conference, LRPD Chief Keith Humphrey said this will be investigated as a hate crime under city’s new enhanced hate crime ordinance. He said his members of police department are heartbroken by the graffiti on the Fallen Officers Memorial.

Police Chief Keith Humphrey starts press conference by thanking the people who came out to clean up the graffiti. #arnews @THV11 pic.twitter.com/jG5ZtEDFok

"As a 32-year law enforcement professional, I’ve never seen anything lime this in my life,” Chief Humphrey said. "There is zero tolerance for vandalism of any memorial."

"While I understand and acknowledge the pain and anger of many feel as a result of police brutality and misconduct across the country, the vandalism of the Little Rock Fall Police Officer's Memorial that occurred last night is not acceptable. I welcome every conversation from any Little Rock resident or business about how we can best keep our neighborhoods safe, including how we re-imagine policing in Little Rock. My administration has led on police accountability, and we have done this by making our case to City residents and stakeholders and our Board of Directors. Building consensus is how we get the systemic changes we seek — not vandalism. I have an open door to any person or organization in Little Rock that shares our vision for accountability and public safety, and I remain open to working with anyone to help move Little Rock forward."