Witness video shows Matthew Dolloff calmly lay down his weapon as police close in with rifles pointed at him.

DENVER — EDITOR’S NOTE: 9NEWS is used to covering many different kinds of stories, but usually we’re not directly involved in them. For this reason, Jason Whitely from our sister station WFAA in DALLAS is covering the initial stages of the shooting and investigation.

At least two amateur videos and a series of digital pictures are likely among the evidence that investigators are using to piece together the moments before a man was shot and killed a man outside the Denver Art Museum on Saturday.

Matthew Dolloff, 30, “is being held for Investigation of First Degree Murder in connection w/the shooting …” the Denver Police Department (DPD) said in a tweet Sunday afternoon. Denver Police also said in a tweet that Dolloff was "acting in a professional capacity as an armed security guard."

The Denver Office of the Medical Examiner on Monday identified the victim as Lee Keltner, 49.

The police investigation is ongoing and Dolloff has not been charged with a crime.

UPDATE: Matthew Dolloff (DOB 03-07-1990) is being held for Investigation of First Degree Murder in connection w/the shooting that occurred yesterday at 10 W. 14th Ave. This remains an active investigation; any additional updates will be released as it becomes available. #Denver https://t.co/1Y7Yw7stL0 pic.twitter.com/Va3Lvc1CwT

Dolloff was contracted through Pinkerton by 9NEWS. It has been the practice of 9NEWS for a number of months to contract private security to accompany staff at protests.

“We are in the process of still gathering information to better understand the incident that occurred in Denver on October 10 involving a contractor agent,” Pinkerton said in an emailed statement. “The agent in question is not a Pinkerton employee. Pinkerton is fully cooperating with law enforcement authorities in their investigation of this matter.”

Pinkerton did not immediately say the name of the company for which Dolloff worked. Pinkerton on Monday released the following statement via its Facebook page:

9NEWS management released the following statement about the incident:

"9NEWS continues to cooperate fully with law enforcement and is deeply saddened by this loss of life.”

“For the past few months, it has been the practice of 9NEWS to contract private security, through an outside firm, to accompany our personnel covering protests. Pinkerton, the private security firm, is responsible for ensuring its guards or those it contracts with are appropriately licensed. 9News does not contract directly with individual security personnel.”

An additional statement from 9NEWS management was released Tuesday:

"As stated yesterday, 9NEWS does not contract directly with individual security personnel. 9NEWS contracted with Pinkerton and had directed that security guards accompanying our personnel not be armed. None of 9NEWS’ crew accompanied by Mr. Dolloff on Saturday were aware that he was armed.”

Brian Loma, of Denver, took one of the amateur videos that captured some of the shooting.

In an interview on Sunday, Loma recalled walking toward several people talking loudly in the area between the Denver Public Library and the art museum – which is near the intersection of Broadway and West 14th Avenue.

As Loma began to approach, he said the situation suddenly escalated. 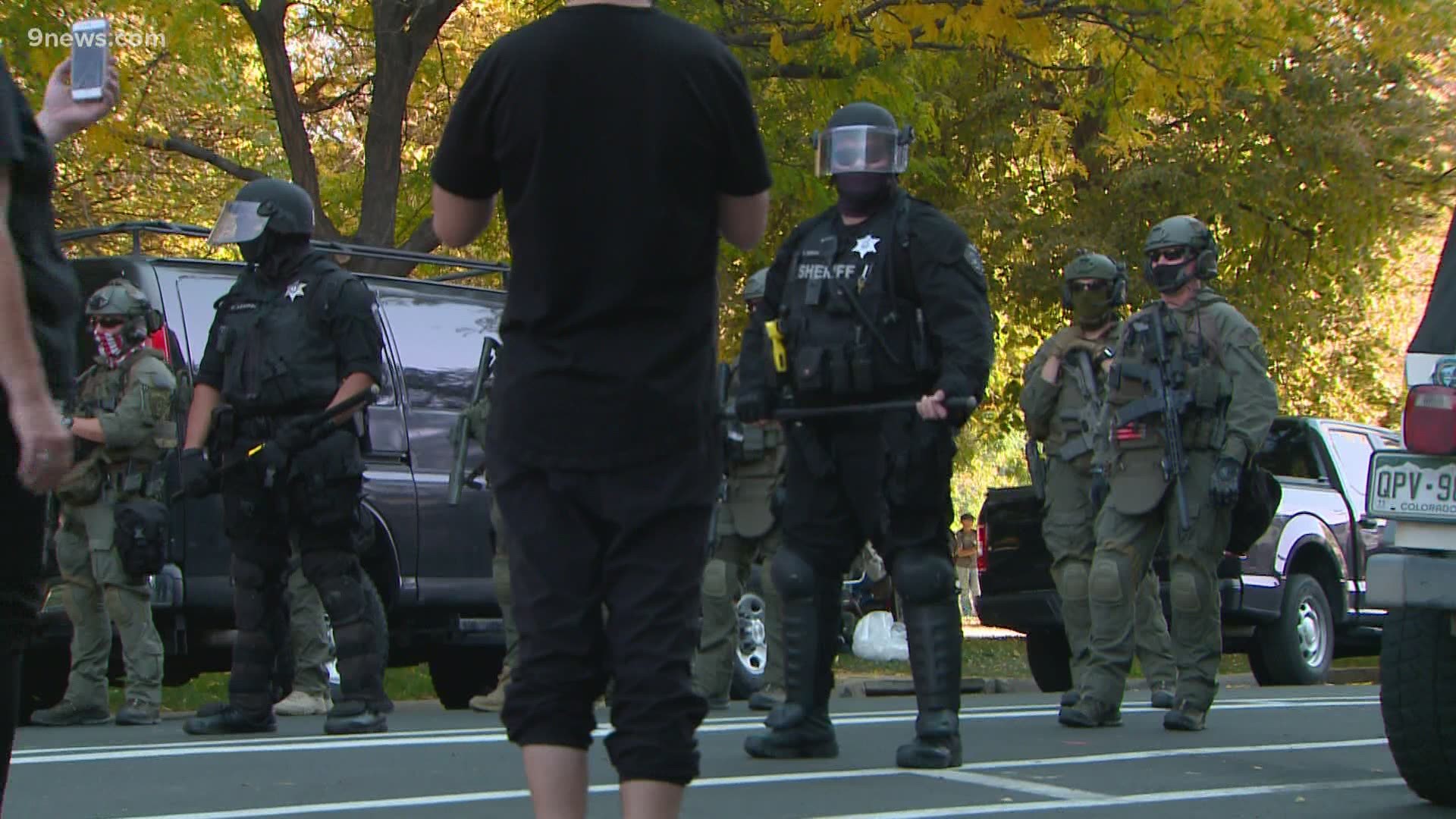 One gunshot is heard on Loma’s video as he begins running toward the scene.

DPD said the gunfire came from a man hired as a security guard, later identified as Dolloff.

Loma’s video shows Dolloff calmly lay down his weapon as police close in with rifles pointed at him.

What’s still uncertain is what exactly led up to the deadly shooting.

In her account, she calls the now-deceased individual a patriot, referring to the group he was with on Saturday.

“The two exchanged heated words. The patriot hit the man in the face, then backed up to spray mace at him to protect himself from the man coming after him as he was expecting,” Richardson said. “Literally in that split second the man who had gotten hit by the patriot pulled out a gun from his waistband and shot the patriot.”

Loma said the man fell on the ground, adding. before pausing to collect his emotions, “a man’s life was lost.”

The victim’s name has not been formally released.

On Saturday, police said they found two firearms at the scene. When asked on Sunday, a DPD spokeswoman could not say who owned either weapon.

Messages for the District Attorney’s Office were not immediately returned.