The Pulaski County facility designed to help people when police officers might otherwise take them to jail has proved to be helpful towards patients. 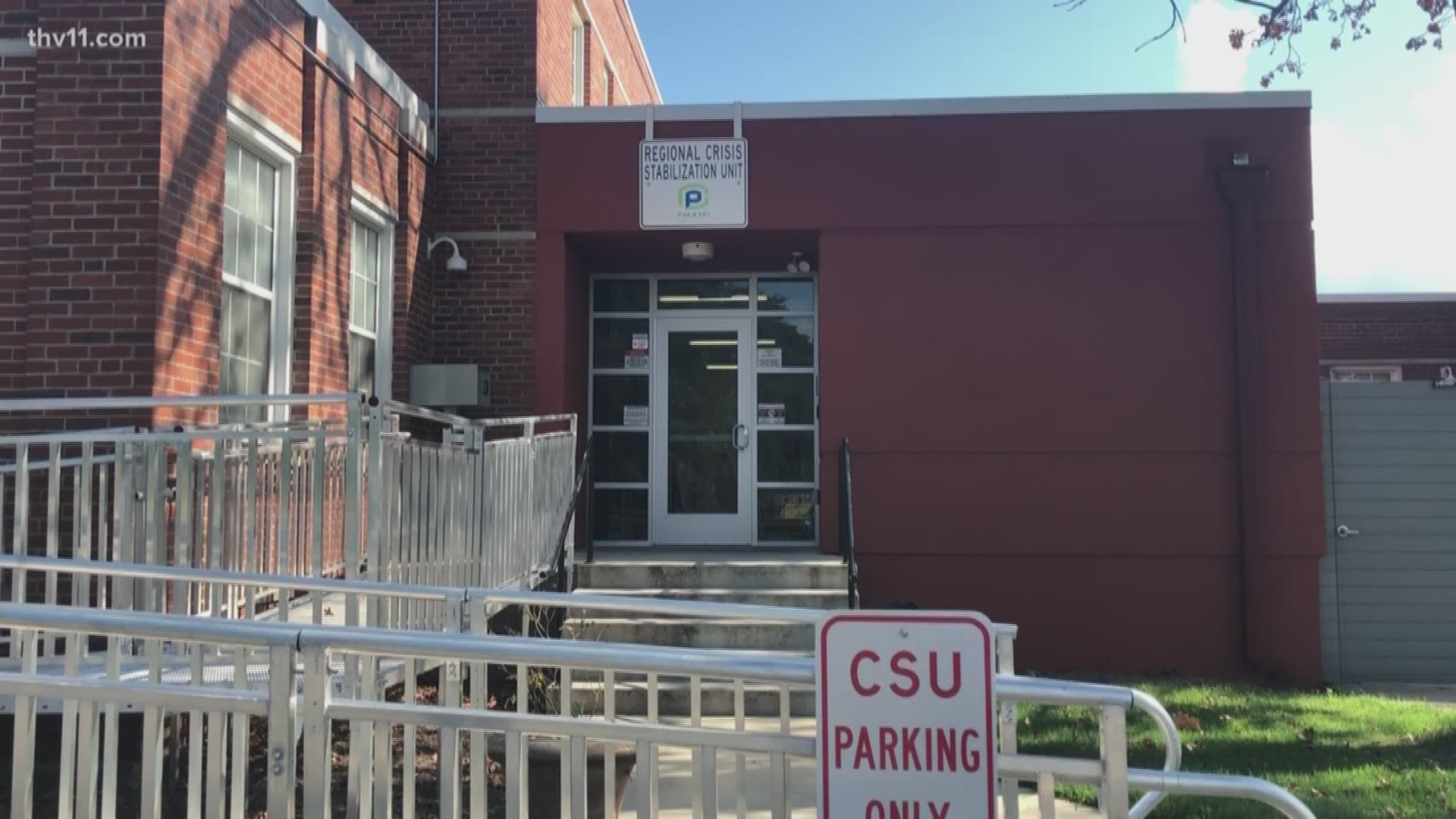 LITTLE ROCK, Ark. — Arkansas has three facilities to help people with mental illness when they might otherwise go to jail. One year after the first center opened, its director says it’s helping, but not doing as much as it could.

Pulaski County’s Regional Crisis Stabilization Unit celebrated the first anniversary of its opening this week. It was the first center of its kind to open in Arkansas and has served approximately 500 people.

“It’s been a really great year,” the center’s director, Dr. Lisa Evans, said Wednesday. “Every day, we are just really excited about the work that we can do to get people into services very, very quickly; just, like, within minutes. And in an hour, they can be back on their medication.”

The center has 16 beds, and Evans said 60-70 patients are admitted each month. Most spend a couple of days there before they are released. Patients either get back on their medications or are diagnosed and prescribed new treatments. They are also set up with appointments at other public, outpatient treatment centers, and those providers come into the center to meet the patients before their discharge.

“With behavioral health issues and chemical dependency issues, a lot of times we have trouble with adherence once they get released from a facility,” Evans said. “So, that’s one of the things we do to try to make sure that they have good continuity of care, and kind of break that cycle of kind of coming back through the ER, or through the inpatient unit, or even encountering law enforcement because of their behavioral health issues.”

The center is a partnership between the State of Arkansas, Pulaski County, and UAMS. It serves several counties in Central Arkansas and is designed so police officers can drop off a person who needs mental health treatment instead of a jail cell. Evans, a psychologist who is also an assistant professor at UAMS, said educating officers about when to consider the center has been one of her biggest challenges.

“Law enforcement is trained to keep the community safe, and they’ve done that for years by arresting people when they do something wrong and taking them to jail,” she explained. “So, we have to kind of train law enforcement to identify behavioral health issues and know when it’s a good idea to bring them to the crisis unit and when it’s not a good idea—because sometimes it’s not a good idea—and change their behavior.

“So, (officers) have to be willing to not charge them with a crime, recognize that the behavior they’re seeing is not criminal behavior, that it’s actually, kind of, almost involuntary behavior that needs to be treated at a medical facility like ours.”

Evans said, of the 60-70 people admitted each month, a couple of them are back for a repeat visit. But unlike recidivism in a jail, Evans sees returning patients as a good thing.

“Maybe the first time they were here,” she explained, “we started their application for insurance, or we tried a couple things to work on getting their ID. If you don’t have an ID, you’re not going to have access to a lot of services, and if they return to us, we might be able to finish those things and help them get a little bit further along the way.”

The center is staffed with registered nurses, an APRN who can prescribe medications, social workers, and psychiatric technicians, in addition to Evans, a psychiatrist. She said there is also a physician on call at all times.

The center is one of four authorized by the State of Arkansas. Facilities in Fort Smith and Fayetteville are open, as well, and another in Jonesboro is expected to open by October. Evans hopes that more will be created to make sure everyone in the state has access to the kind of mental health care a crisis stabilization unit can provide.

“We kind of need to prove our worth, that we’re doing a service to the community, and then it will eventually grow, I think, into other parts of the state,” Evans said. “Right now, in the rural parts of Arkansas, in South Arkansas, you know, they really don’t have access to a crisis unit like this. It’s a little too hard to get all the way up here; it’s certainly difficult to get people back to where they came from, back to their families. Transportation is a big, big, problem, even for us here locally in Central Arkansas.”

RELATED: Grant helps offer housing and care for those living with HIV/AIDS in Pulaski County

Evans said each patient is given an assessment when they enter and a survey when they leave to make sure each person feels respected and helped. “We also are tracking—via health care data—ER utilization, inpatient psychiatric utilization, and jail utilization,” she added. “So, we want to try to break that cycle of going back to use those services, keeping people in their lives and in their home, in their community with their children, their families, and going to outpatient services like everybody else.”

The Pulaski County Regional Crisis Stabilization Unit became the first in the state to receive national accreditation. The accreditation from CARF International will last for three years. “Everybody (who) walks out that door I know has gotten gold-standard care, and everybody here has done everything they can to try to get them what they need,” Evans said.

“So, yeah, we feel good about that every single day in the people that we’ve been able to serve over the last year, so we’re looking forward to another successful year, and hopefully getting to serve more people.”