Vape shops around Arkansas say they want to raise the sales tax on their products because it might be the best way to save their businesses. 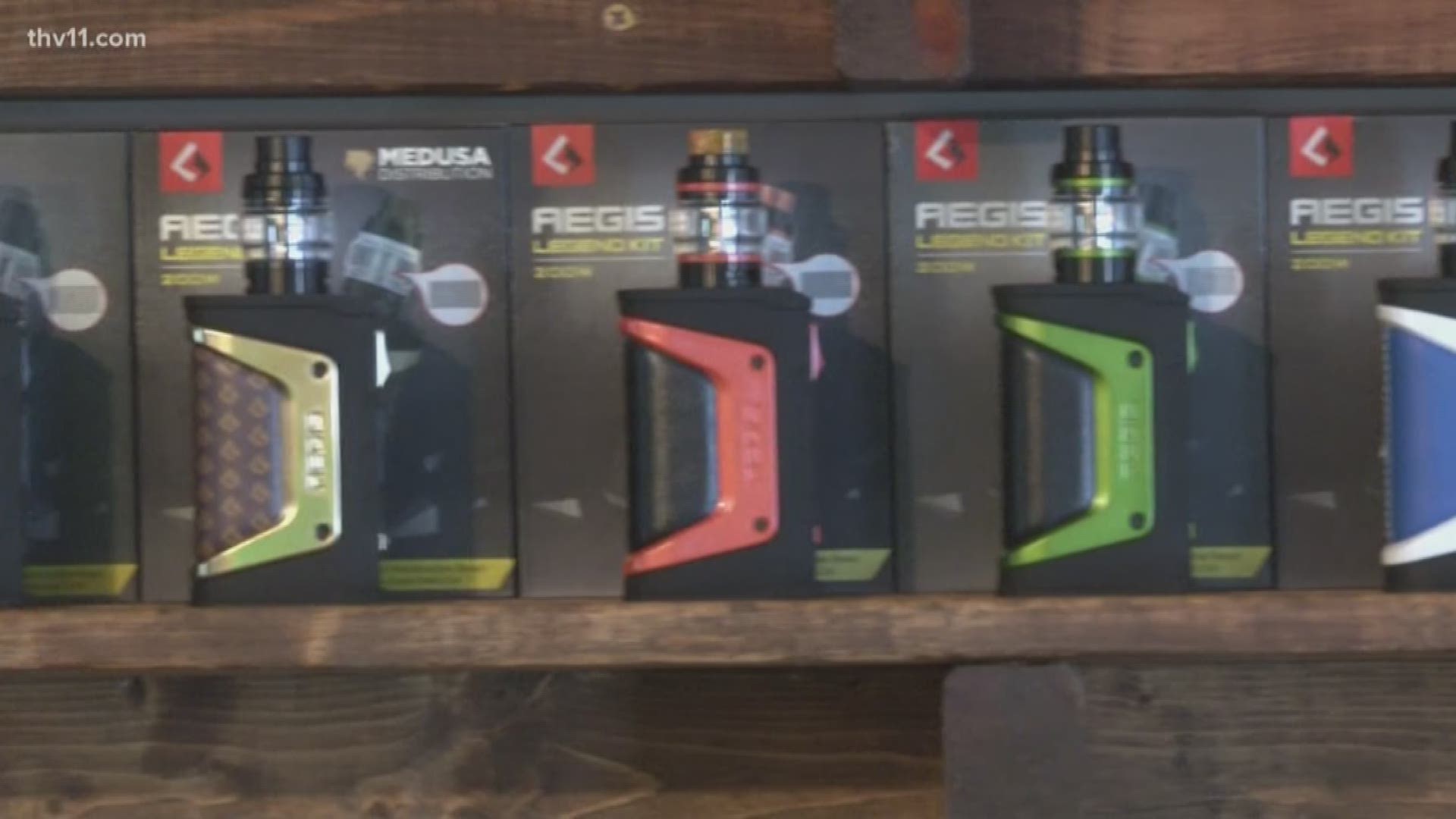 GREENBRIER, Ark. — Vape shops around Arkansas say they want to raise the sales tax on their products because it might be the best way to save their businesses.

The Arkansas Vape Advocacy Alliance, which has approximately 160 member businesses around the state, announced Monday that it would offer to self-impose a two-percent sales tax on its products.

The proposal is in response to a bill from the last legislative session that would have taxed vaping products at 67 percent.

Senate Bill 571, authored by Senate Majority Leader Jim Hendren, was one of several bills debated in 2019 that would have added taxes to vaping products. His bill would have taxed vaping products at a rate equivalent to the tax on traditional tobacco products.

“A tax like that…if you’re really trying to combat Juul youth usage—which is what you’re seeing in a lot of these schools—why would you place a tax on a product like ours?” Stubbs asked.

The plan announced by the AVAA also differs from those debated by the legislature in that it would be a sales tax and not a wholesale tax. A wholesale tax requires businesses to pay the state as soon as they purchase a product, while a sales tax allows the business to make a sale before it sets aside the tax.

Stubbs, who is also the secretary of the AVAA, said the e-liquids she sells in her stores most frequently have three milligrams of nicotine per milliliter, while Juul pods, which are popular among teens who vape illegally, contain 50 milligrams per milliliter.

“I feel like nicotine in that high of a concentration is not necessary to quit smoking,” Stubbs stated, adding that her stores do not sell Juul products.

“Our goal is to gradually step a smoker down on nicotine until, eventually, they’re vaping no nicotine at all and they can quit entirely.”

The AVAA lobbied to defeat the legislature’s tax bills, arguing that a 67-percent tax would have raised prices so dramatically that locally-owned stores would have gone out of business. Stubbs believes that would have made the problem of teen vaping even worse.

Stubbs estimated that a two-percent tax would generate around $4 million a year for the State of Arkansas, which could pay for additional education or enforcement programs. She said she and the other members of AVAA share a commitment to keep teens from vaping. “We don’t allow unaccompanied minors in our stores,” she stated. “We go above and beyond with the ID checks. If we even think there’s a person out in the car that’s underage and their older friend is coming in to buy it for them, we deny the sale.

“The two percent tax is another step that we’re taking, even farther to separate ourselves from Juul, and to offer that to our state legislature to preempt anything that could be so detrimental to our industry in the state.”

Stubbs argued that vaping products should be treated by the state in the same way as nicotine patches, gums, and other products designed to help people quit smoking. She pointed to a study published in January that showed vaping to be nearly twice as effective as other methods to help smokers quit cigarettes.

“I got an email last week from a guy named Matt,” Stubbs mentioned. “And he lives right down the road. And we used to see him all the time, and he emailed me to say, ‘hey, I’m still alive, I just don’t come in anymore because I quit vaping entirely.’ And I’ve watched their progression. I watch these customers come in, and they start at, like, a 12mg/ml e-liquid on a smaller device, and they gradually go to six and then to three, and then to zero, and then I don’t see them again.”

Sen. Hendren (R-Gravette), wrote in an email Monday afternoon, “While I appreciate the recognition by the Vaping industry that we have a problem, I think a decision about the taxation of new tobacco products needs to begin with the legislature not the tobacco industry itself. The legislature will be having hearings in the upcoming months to answer questions about the long term effects of vaping, the costs that tobacco use puts on all Arkansas taxpayers, and the challenge of preventing youth from becoming addicted to new tobacco products.  Then we will be in a position to build consensus on a sound policy for Arkansas.”