Morgan Taylor said one nail technician began to cut up a deer right in front of her. 'Hunting for a new nail salon in North Carolina?' She wrote on Facebook. 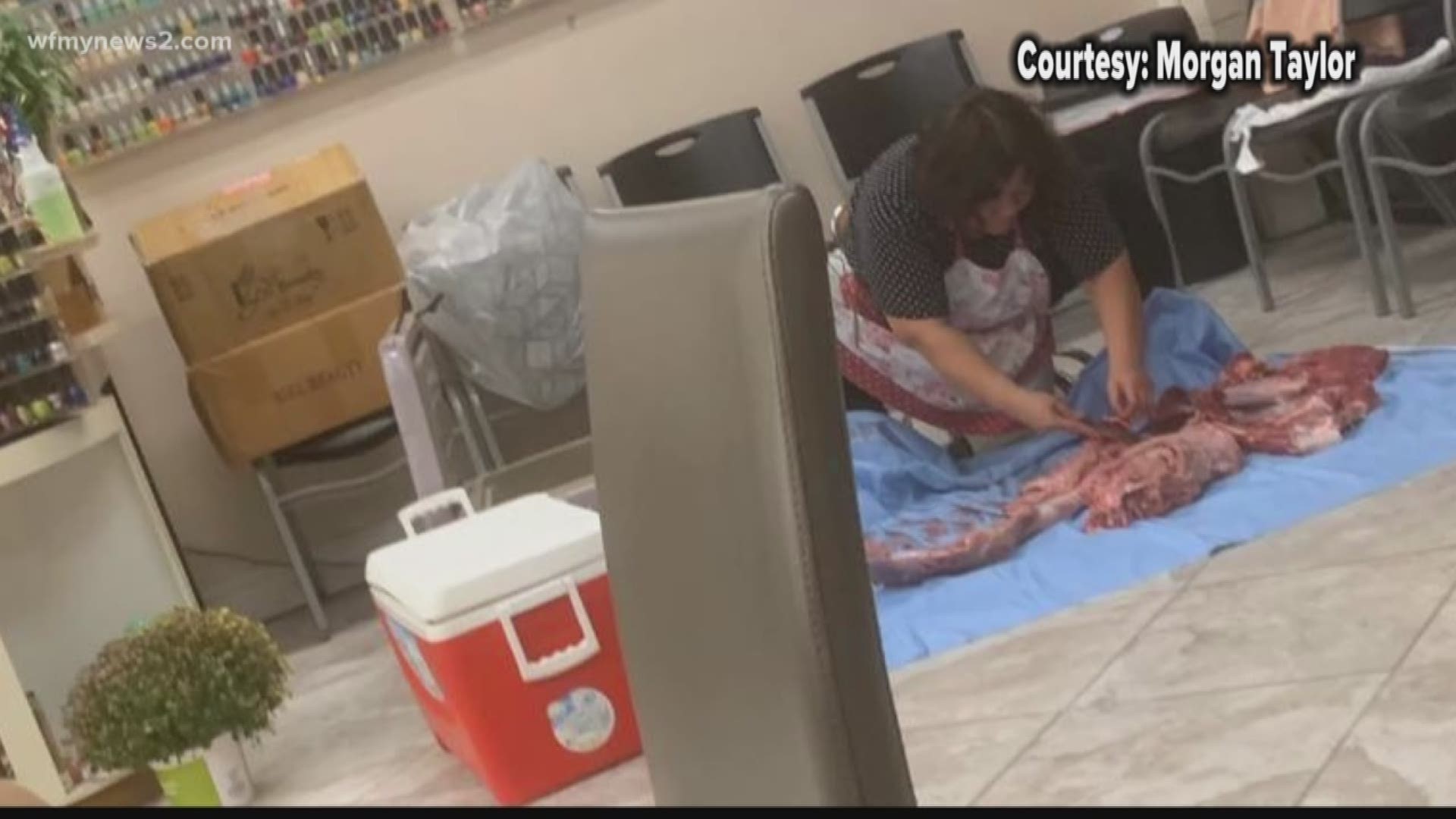 Taylor said one nail technician began to butcher a deer right in front of her eyes.

She clarified that the employee wasn't using any nail tools on the deer, she was using what appeared to be a 'kitchen knife.'

"I asked them what it was, because just seeing them unload flesh and bones was a little bit shocking," Taylor said. "They said it was deer meat and they were splitting it up between the workers to take home."

'Hunting for a new nail salon in High Point, North Carolina?' She wrote on social media.

She used the hashtag #OhBuckNo.

"A couple of people are defending the nail salon which is interesting, saying like, it's their property, it's their right and that it was closed which it was not," she said.

Taylor says she was in utter shock.

"The people were all very nice, nothing out of the ordinary until the deer," Taylor continued. "It had already been skinned, they were sectioning it."

She says she reported the incident to the North Carolina Board of Cosmetic Art Examiners.

"I don't hope they lose their jobs or anything, that's not why I did it," Taylor stressed. "But people can get sick from this like that is not good."

Taylor said that is the first and last time she'll be visiting that salon.

"Someone should investigate this and they should not have an 'A' as their sanitation rating because that's what they had."

Taylor summed up her experience in two words: 'shocking and unsanitary.'

Jess Winters spoke with an employee at the salon who said the owners were out of state, and that WFMY News 2 would need to speak with them. But they didn't deny the incident.

When we asked the North Carolina Board of Cosmetic Art Examiners if they've ever had anything like this on record, this is the response we got:

The Board and its inspectors have not received a complaint within memory of butchering in a cosmetic art shop.

The Board said they could not comment on any open investigations, but did add that Diamond Nails has had two civil penalties in the past for illegal equipment in the shop.

Q&A with the Board:

Q: Are nail salons in North Carolina inspected on a regular basis?

A: All salons are inspected annually without notice. Every complaint received by the board is investigated.

Q: How many inspectors work for the North Carolina Board of Cosmetic Art Examiners?

Q: How can someone file a formal complaint about a nail salon?

A: We accept complaints via fax, mail, email, and through our online complaint form at www.ncccosmeticarts.com.

A: Yes, we have a grading system within our regulations that establishes grades for cosmetic art shops.  Grades can be either A, B, or C and the Board’s authority to assess a civil penalty is $1000 per offense.  Shops and schools with a B rating are reinspected within 30 days and those with a C rating are reinspected until the grade is above a C.

Q: How can you find nail salon grades?

A: Here is a link to our consumer verification page that includes shop and school grades.

Q: How are salons investigated?

A: We investigate per our regulatory authorities including sanitation, disinfection, and licensure. In the past, we have coordinated investigations with local health departments and regularly refer complaints to outside authorities as appropriate.

Q: Do you only inspect the physical conditions of the salon?

A: No, we also verify the licensure status of the shop and individuals performing services.

Q: Do nail salons have to renew anything like a license periodically?

A: Shop licenses are renewed annually.

Q: Do inspection grades have to be displayed inside nail salons?

A: Yes, grade must be posted within all cosmetic art shops

Q: On average, how many nail salon complaints do you get a year?

A: Cosmetic art shops are not differentiated by the types of services they offer.  Last fiscal year we received around 1,100 complaints.

Q: In your professional opinion, is it up to the consumer to do their homework on the cleanliness of a nail salon, and bring their own tools?

A: We try to educate everyone so a safe service will be achieved.

RELATED: Does Your Nail Salon Use Dipping Powder? Here's How To Make Sure They're Using It Safely