Dozens of Little Rock teachers filed in for an emergency union meeting Tuesday night. Some were forced to wait outside because the auditorium hit capacity. 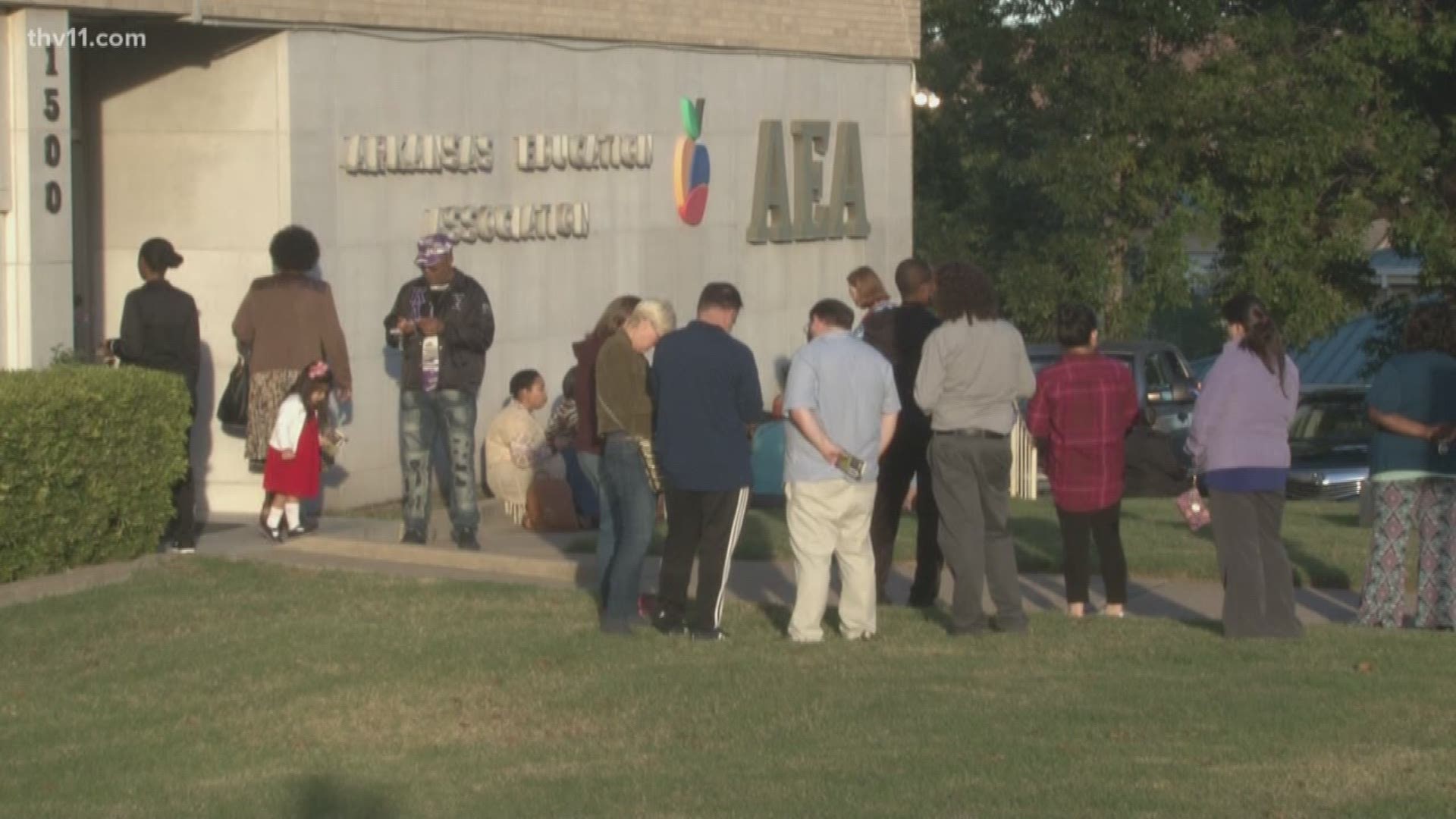 LITTLE ROCK, Ark. (KTHV) - The head of the Little Rock teachers’ union says they do not want to strike, but they have reached an impasse in their contract negotiations with the Little Rock School District.

Dozens of members of the Little Rock Education Association (http://www.littlerockea.org/) gathered for an emergency meeting Tuesday evening — many forced to wait outside because the auditorium they used reached capacity — 24 hours after Arkansas Education Commissioner Johnny Key rejected an agreement reached between LREA and the LRSD.

Key acts in the role of a school board because the state took control of the district in 2015. He advised LRSD Superintendent Michael Poore that two changes must be made. First, a clarification about when the negotiating role of LREA would be recognized, which he called a minor adjustment. The more substantial change is that he wants the teachers to agree to waive their protections under the Teacher Fair Dismissal Act. The TFDA is a state law that guarantees due process for teachers and sets specific methods for termination.

During a meeting with reporters, Key said he asked for it now because rules had recently been adopted by the state legislature that allows him to do so.

“This is a step to provide another tool in the toolbox,” he explained, “to help principals, to help Mr. Poore, to help his leadership team create the atmosphere, create the conditions for more improvement and make it happen sooner.”

Key said inconsistent improvement means LRSD is no better off than it was in 2015. At that point, six schools were considered to be in academic distress. While Key mentioned that ADE uses different criteria now, 22 schools--half of all the schools in the district — earned grades of D or F in the latest state-issued report card.

“This troubles me greatly, and I would think that it would trouble the entire community. And when you dig deeper than just the letter grades, you quickly see that there are a significant number of students across all student groups — whether you’re talking about Special Ed, African American, Latino, English-learners — that are not being served currently, and it’s something that we need to take action to correct.”

Only those teachers in schools graded D or F would be subject to the waiver of the Fair Dismissal Act.

"ADE was charged with the responsibility of improving our schools,” Teresa Knapp Gordon responded. “Where does the problem really lie?”

Knapp Gordon, head of the LREA, said she assumed that, because her team and Poore’s team agreed on a contract, it would be approved as it had been in years past.

“We did not look for this to be a negotiation session that was gonna result in any kind of conflict, because there were very few changes. So, we’re very disappointed in this development.”

She said the annual negotiations on the contract, which expires Oct. 31, began in August.

“To wait until that point,” she said, “to come back and say that he wants something like this in there is just not good faith negotiations. It’s bad faith. It’s dishonorable. It doesn’t respect our teachers and our employees. It doesn’t respect our students, because it’s obvious what it means to do, and that is to break our union.”

“I’m still responsible,” Key stated, “for reading it, understanding the impact of it, and approving it or not approving it. So, to say that there’s some bad faith on my part—as has been alleged—is simply ignoring my responsibility.”

Key said teachers must accept some blame for the failure to improve scores in LRSD because approximately half of them missed 10 or more days last school year, the same number that labels a student as chronically absent.

"This is simply one of those tools that says, look, if you’re not going to come to work, we’ve gotta get somebody in those classrooms.”

He denied that waiving the Fair Dismissal Act would lead to mass firings, suggesting that it “wouldn’t be used as a chainsaw, it would be more like a scalpel.” He added that teachers would not be the only ones who need to lose some job security.

“There may be principals where, that situations need to be addressed, in struggling schools,” he said. “You know, I know that has been a factor that Mr. Poore and I have talked about is: we need to look at the leadership in these schools. Maybe it’s not what’s going on in the classrooms, maybe it’s what’s going on with the culture.”

Key and Knapp Gordon both said they would not back down from their stances on the Fair Dismissal Act. Knapp Gordon said LREA would resume negotiations with LRSD but could not promise that a resolution would be reached, leaving open the possibility of a teachers’ strike.

“I believe that our members will vote to stand up for our children if that becomes necessary,” she stated. “But we are willing to uphold our process--which has been in place for over 50 years — to try to reach an agreement so that we don’t disrupt the learning of our students.

“I just want the public to know that the teachers and staff of the Little Rock School District and our members are going to do what’s best for our children. And if that means that we have to stand up to Commissioner Key to keep him from doing more harm to our district, then that’s what we’ll have to do.”