The family of Bradley Blackshire said Monday that, since prosecutors won't give them justice for his shooting death, they will seek it in a different way. 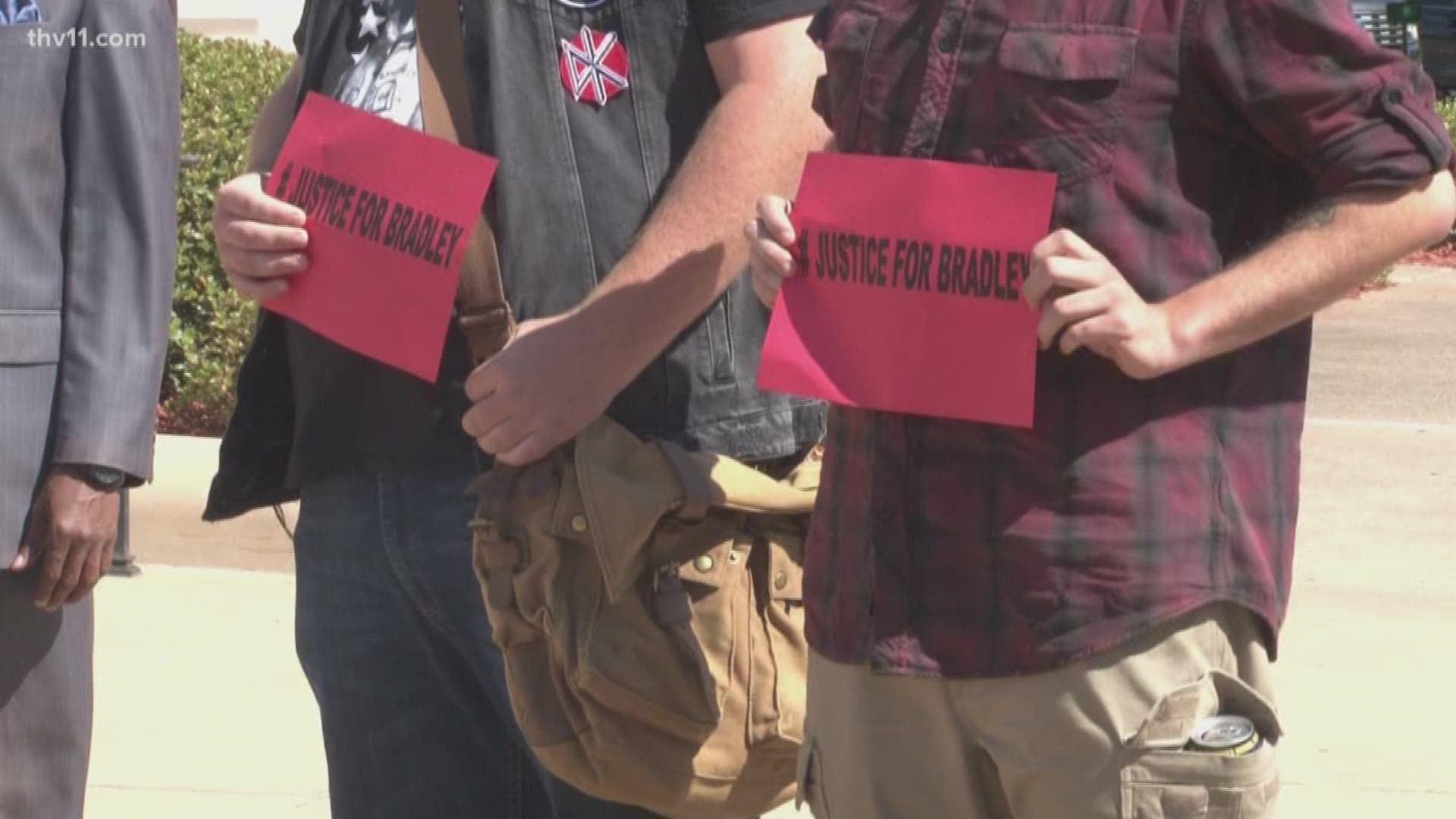 The family of Bradley Blackshire said Monday that, since prosecutors won't give them justice for his shooting death, they will seek it in a different way.

They led a rally on the steps of the State Capitol, demanding accountability from the Little Rock Police Department and city leaders.

Officer Charles Starks killed Blackshire on February 22. According to LRPD, Blackshire was driving a car that was reported stolen. Starks told Blackshire to get out of the car, then shot him, per the incident report, when Blackshire drove the car into him.

“I don’t know what tape they watched,” Blackshire’s mother, Kimberly Blackshire-Lee said Monday in reference to the videos of the shooting released by the department, “but the one I watched didn’t show me what they say they saw.”

Pulaski County Prosecuting Attorney Larry Jegley announced Friday that he would not bring criminal charges against Starks, deciding that his use of deadly force was justified.

Little Rock Police Chief Keith Humphrey has said he would decide either by the end of April or the first week of May whether to discipline Starks, fire him, or readmit him into the department.

Rizelle Aaron, past president of the NAACP in Arkansas and Blackshire’s uncle, reiterated his call for a citizen review board to watch over the police department.

“We are asking,” he added, “that that review board have enforcement authority to investigate, investigate complaints against police officers, but also to recommend to take disciplinary action against those police officers that are found to be in violation of the law or the policies and procedures the Little Rock Police Department.”

Aaron mentioned that Starks had been suspended multiple times by LRPD and suggested that he should have been fired in the past. “The Little Rock Police Department and the City of Little Rock failed to protect Bradley, and it continued to fail to protect our people,” Aaron said.

Blackshire’s parents also spoke to a crowd of a few dozen people. “We’re trying to prevent some other family from having to go through what we’re going through at this point,” his mother, Kimberly Blackshire-Lee, said.

“Justice for Bradley, and what it looks like to me, it means assuring that no other family has to experience the pain and the hurt that we’re experiencing. It means changing policies and practices to further emphasize deescalating police encounters rather than escalating them with potentially fatal results. And it means stepping up to prosecuting police officers who needlessly kill our children."

RELATED: One dead after exchanging gunfire with Little Rock officers outside Arby's

Another family is going through something similar. Sunday afternoon, officers Ryan Stubenrauch and Chandler Taylor shot and killed Michael St. Clair. According to a statement released Monday afternoon, St. Clair had been reported as a suspicious person with a gun, and when the officers approached him, he shot at them and ran, prompting them to return fire. St. Clair was taken to a hospital where he died.

Deangelo Lee, Blackshire’s father, said the black community needed to organize in order to change laws and policies. “It’s time, as a people, that we put everything to a side and start standing for what’s right,” he stated. “There are hundreds of thousands of men and women of color who lost their lives to fight for our freedom. But yet, we won’t stand to fight for ourselves.

“This is not just about Bradley, this is for every person of color. This is for the human race!”

Approximately a dozen police officers stood at the periphery of the protest Monday, with others seen on nearby rooftops. Humphrey asked last week that any protests stemming from Jegley’s decision remain peaceful.

“Although today is peaceful,” Aaron said, “it is at the request of Bradley’s mother, Kimberly Blackshire. But, just because today is peaceful does not mean tomorrow will be peaceful, too. Tomorrow is a new day, and our movements will be calculated, stealth, and deliberate. We may have tried it the other way for far, far too long.”

Aaron noted that only one politician—State Senator Joyce Elliott (D-Little Rock)—attended the protest Monday morning. He said future protests would take their demands directly to those involved and those who run Little Rock.

“Starks’ house, where you’re staying—brother, I already know,” Aaron claimed. “That’s what I do for a living. Larry Jegley, in Roland, we’re coming. I hope you hear me. Little Rock Board of Directors, we’re coming. And, Mayor Frank Scott, you’re my friend and I love you, but we’re coming to your house, too.”

The speakers at Monday’s rally encouraged black men and women to run for office or to vote for people who would listen to their concerns about officers’ use of deadly force. Aaron also said they are asking the Department of Justice to see about a federal case against Starks.

“I promised my baby the day that I put him away,” Blackshire-Lee stated, “that I was going to do everything—every ounce of breath I had in my body—to fight for justice, and I’mma do just that.”