Nowhere does the FDA mention something called "breast implant illness," a term the medical community doesn't currently recognize, yet countless women insist they have it. 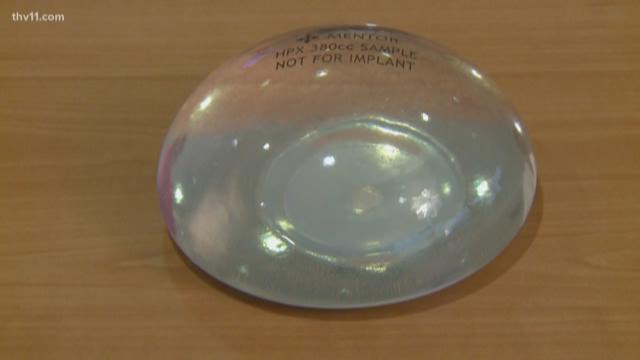 That is millions of women who have breast implants.

But now, thousands of them are claiming their implants are making them sick. We went to find out why so many women including Arkansans are having them removed and what the medical community is saying about it.

The FDA warns of potential risks associated with both silicone and saline breast implants. Silicone and saline breast implants are the most common to rupture or leak causing infections shortly after the implants are put in and causing something called capsular contracture, where the scar tissue forms around the implant tighten.

But nowhere does the FDA mention something called "breast implant illness," a term the medical community doesn't currently recognize, yet countless women insist they have it.

"I had a reaction, I had a sickness I had an illness and I had explant surgery," Breezy Osborne.

Osborne is an open book when it comes to her breast implants. You can ask her anything. The 37-year-old will tell you when she turned 20 years old in May of 2000, she gifted herself with breast implants. It was her way of looking and feeling better.

"All of a sudden I started having very random neurological, endocrine systems, autoimmune issues that just came up out of nowhere," said Osborne. "I went in there and I said you might think I'm crazy or you might not believe me, but I believe my implants are making me sick, and I want them taken out," said Lauri Miller.

That was seven years after 43-year-old Lauri Miller got her implants put in for the same reasons of looking and feeling better. Now, both women along with thousands more are part of a private Facebook group. In this group, the women talk about having their implants removed or explanted for reasons that, at first, seemed a mystery. Miller reached out to us, Osborne posted publicly about her journey on social media. Each saw multiple different physicians and no one could explain their symptoms.

"My fingers were swollen, my feet were swollen and when I would try to walk it would hurt to walk on the ground and I had a rash on my legs and, she tested me for everything under the sun, thinking I had a tick-borne illness and everything came back negative," said Miller.

"My world was totally turned upside down," said Osborne. "Over the next week, over the next month, everything on the right side of my body totally changed. I wasn't able to use my right leg a lot, the weight would give out, the strength would give out. And my vision changed on my right side."

Frightening for the owner and teacher at Barefoot Yoga Studio. It became difficult for Osborne to practice and teach. As a mom to a little girl, basic tasks like braiding hair weren't possible. She began experiencing rashes and symptoms she couldn't explain. "It took me weeding through about a dozen doctors and I stumbled upon a nurse practitioner," she said.

That nurse practitioner suggested Osborne look into what's called, "Breast Implant Illness." It was something she had never heard of. And Lauri Miller hadn’t heard of it either, and now she was also suffering from rashes and was diagnosed with an autoimmune disease. When she couldn't get answers, she began researching breast implant illness on her own.

"And all kinds of stuff came up. Symptoms that if you go and look at it, 30 or 40 symptoms well I've got 15 of them," said Miller. "Thousands of women is what I stumbled upon that have so many stories, similar symptoms, worse illnesses than me and reactions," Osborne added.

They found a website called “Healing Breast Implant Illness” and it's Facebook page has more than 35,000 women who had similar responses. Osborne said that is when she decided she wanted her implants removed, and they were taken out in April of 2017.

"In less than 24 hours, my symptoms were almost gone. And I thought to myself maybe it's just the medicine from the surgery, so I gave myself months and weeks to look into it, GONE!" she stated.

Miller saw three different doctors and is planning to have hers removed in early March. "Every single one of them recognized that the implants could be causing this but what they all said is we don't know."

"That's fine that you don't know but when you have thousands of women who say they're getting better because of having implants taken out you would think at some point the manufacturers or the FDA are gonna look at this and say let's follow these patients," said Miller.

What do doctors say?

But that hasn't happened. So, we took both Osborne and Miller's stories to UAMS’s head of Plastic Surgery to find out why.

"I don't have any incentive, I'm not paid by the breast implant companies, I use this as a tool to make my patients feel better, but if it doesn't make them feel better, it's not needed," said Doctor Keith Wolter.

Wolter said no medical device is perfectly safe and warns his patients of the potential risks of breast implants. "We do not want to put a device in our patients that are gonna make them sick." He said if a patient asked about breast implant illness, he would discuss it with them but doesn't warn of it upfront. This is mainly because it's not a recognized medical condition. There's no code to diagnose it, no imaging or testing that –right now- can be done. And no studies he's seen that prove it. "It's very hard to prove a negative so you never wanna say well I couldn't show it so therefore it's never happened," he added.

"There is not, to me, convincing scientific data proving that that occurs." Still, Dr. Wolter said he does believe the women who claim to have it and he has also consulted with colleagues around the United States. "I'm not discounting anyone's experience and I know there many women who will tell you they have implants and they have them removed and their symptoms improve My colleague in Texas says he's had two of these women tell him they get better in the recovery room, he takes the implant out and they feel better in the recovery room," said Wolter.

So, we asked the FDA why breast implant illness isn't recognized. They issued us a statement that said, “The FDA reviews data submitted by breast implant manufacturers in post-approval studies, monitors medical literature and engages with patient advocates regarding concerns patients have about their breast implants causing neurological, autoimmune or other disorders. With the exception of breast implant-associated anaplastic large cell lymphoma (BIA-ALCL), the FDA does not have evidence to date linking breast implants to a wider range of illnesses. If we have any updates to share about breast implants and any potential links to diseases or conditions, we will communicate that information to the public.”

"If somebody could find proof of a smoking gun that these are dangerous that would be very interesting for people like myself," said Wolter. "Even if it's not a recognized illness yet it's important for doctors plastic surgeons to understand how women feel," added Miller. And Osborne contributed with, "All I have is my story to base on my experience, that's all we have and it's our right to share that."

It's important to note that there are millions of women with implants who have little to no complications. The women just want doctors to recognize this as a legitimate illness, along with a warning in place up front from both the FDA and manufacturers that this illness could happen as a result of breast implants.