"There's probably a lot more clusters in restaurants than anybody really wants to admit." 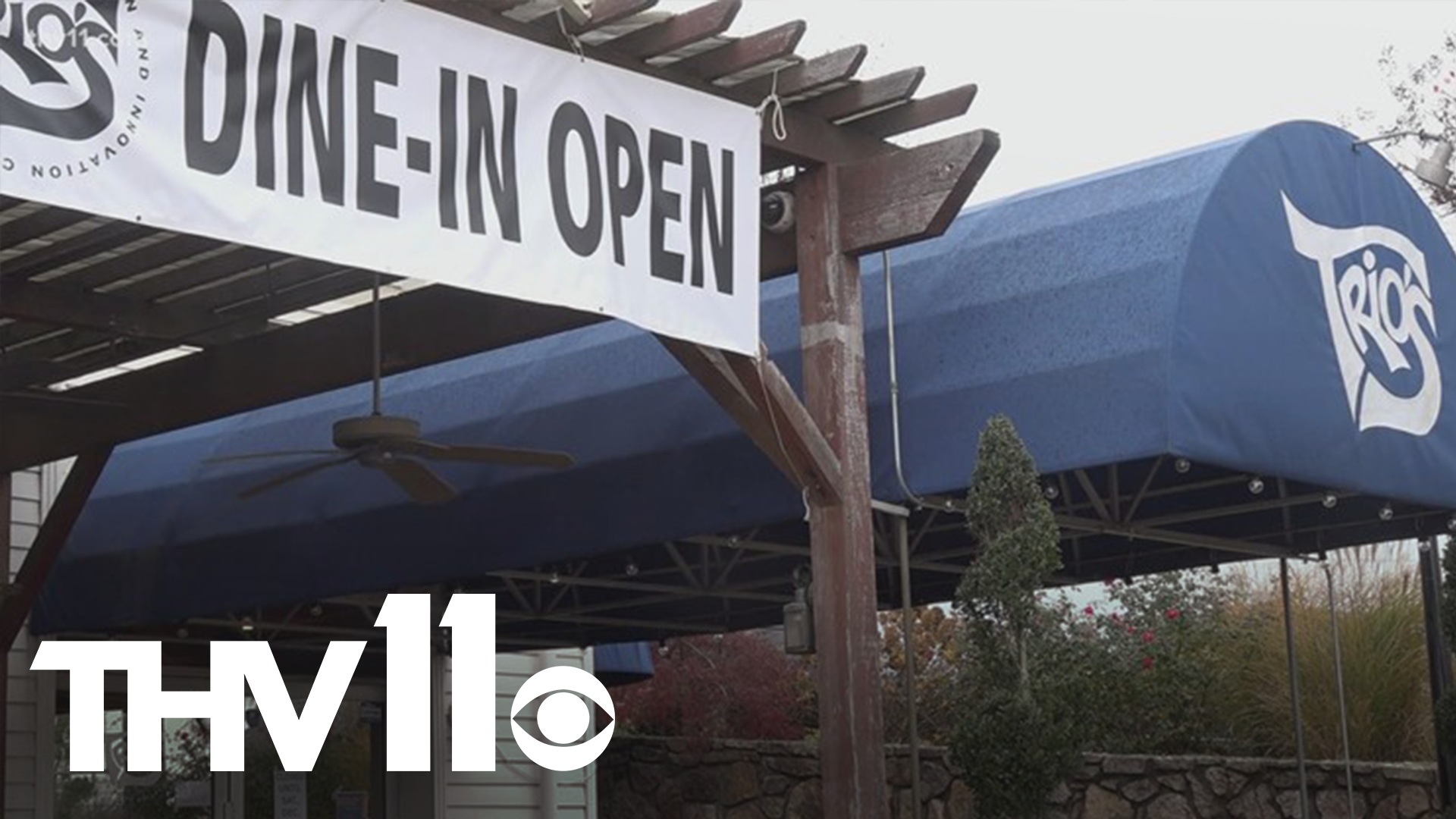 LITTLE ROCK, Ark. — A restaurant co-owner and member of the Little Rock Board of Directors says she's frustrated Arkansas continues to allow inside dining at two-thirds capacity after she and nine other employees tested positive for the virus.

Capi Peck calls Trio's Restaurant "the poster child" for safety and precaution, but she still contracted the virus along with her partner in the 34-year-old "new American-style" eatery.

"Well honestly, I've been frustrated since March," she said Friday while recovering at home. Peck has been an outspoken critic of the state's Republican leadership during the pandemic. The restaurant has been closed on three different occasions even though state mandates didn't require it.

"We've done so many things that we didn't have to do at the restaurant, but lo and behold, we've had nine people including my partner that have tested positive," she said.

She says everybody is getting better, including herself after a few days of classic COVID symptoms. Most of the positive cases came in the kitchen and spared the "front-of-the-house" staff. That should be a relief for anyone who ate there recently and tracks with data indicating dining isn't a significant vector, but there's a problem getting the situation recognized as an occupational cluster.

"I haven't been contacted yet by a contact tracer and it's been a week now," Peck said. "So I think a lot of us are falling through the cracks. I think there's probably a lot more clusters in restaurants than anybody really wants to admit."

The Arkansas Dept. of Health produces a twice-weekly report on businesses dealing with five or more active cases. Since shifting from a report focused on case clusters in food processing plants, there have been no reports of an accommodation or food service business developing an outbreak.

A spokesperson for the ADH said case investigators hadn't apparently linked five or more members of the Trio's staff together and so they did not make the Dec. 10 report. But with Peck and her partner both still yet to be reached by a contact tracer, there's doubt over whether investigators would even have enough information to identify the cluster.

Gov. Asa Hutchinson admitted Tuesday that contact tracers are overwhelmed dealing with the caseload that sets records almost daily. The ADH spokesperson said a business owner could voluntarily call the health department to report the cluster.

"We work closely with businesses to make their environments as safe as possible," said Gavin Lesnick. "This means ensuring that directives on face masks and distancing are being followed as well as making sure that positive cases follow isolation guidelines and that close contacts quarantine. Businesses share our goal of minimizing the risk of spreading COVID-19, so we work well together on these efforts."

Peck said she would look into reporting the outbreak while awaiting the call from a contact tracer. She said Trio's will open Saturday, Oct. 12 with a crew of healthy staffers, but she expects to revert back to curbside service soon.

RELATED: VERIFY: What exactly is the mask mandate inside Arkansas restaurants?

Peck also calls herself a hero to some, but a villain to many fellow restaurant owners for her calls to close or reduce. She says they have taken on considerable debt because of the lost business, but calls any owner who doesn't put safety of staff and guest first irresponsible.

"In a closed space like a restaurant, masks or no masks, six feet or 20 feet, it's a risk," she said.