We've all seen how our counties have been hit by the coronavirus, but now we can see how our own city has been impacted. 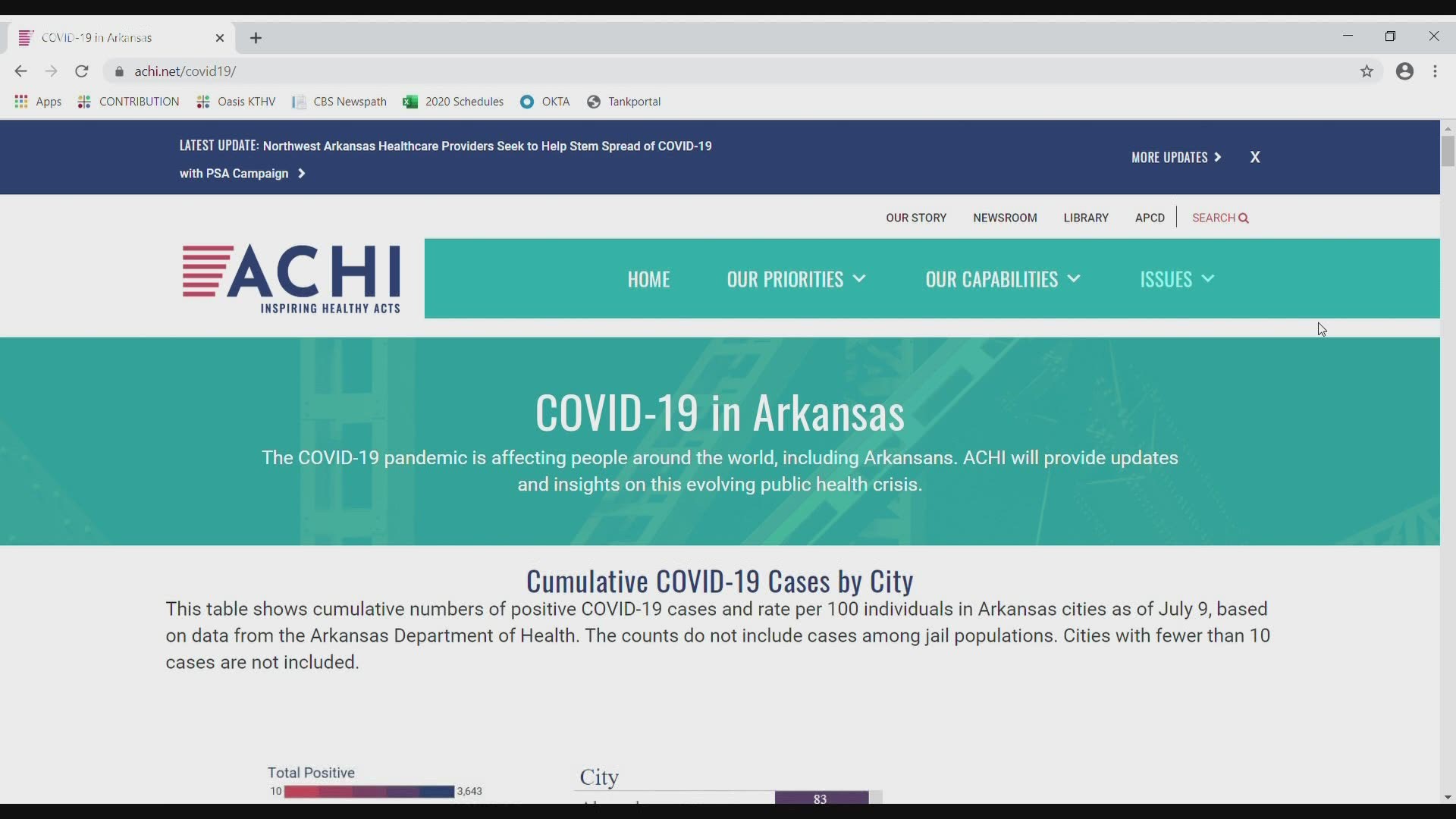 LITTLE ROCK, Ark. — For the first time since this pandemic hit, Arkansans can now see how hard their cities are being impacted by the coronavirus.

The Arkansas Department of Health and the Arkansas Center for Health Improvement are now sharing city-wide case numbers.

Dr. Joe Thompson, President and CEO of Arkansas Center for Health Improvement, said this data is necessary in helping curb the spread of the virus in our state.

"The COVID virus is present, it's growing and it's not in complete control," he said.

Thompson described that vicious virus as a threat state-wide.

"I think too often we want to lull ourselves to say, 'oh this is a poultry processing plant' or 'this is a big city issue' or 'this is a group of individuals that have been reckless.' This is in every city," he said.

Thompson hopes more people understand the severity in their communities, now that they know the number of cases within their streets.

Since the pandemic began, Thompson started to see the need from city leaders that county level data wasn't enough.

"When the governor and Secretary Smith gave out the county level data, it did not let the mayors articulate and amplify that message to say, 'it's not just in our county, it's in our city,'" he said.

Through a collaboration with the Arkansas Center for Health Improvement, the Arkansas Department of Health, and the Municipal League, a strategy was developed to give the mayors what they had been asking for, according to Thompson.

On ACHI's website, a table now shows a cumulative number of positive COVID-19 cases and a percentage of individuals from over 200 Arkansas cities as of July 9.

The mayor of Dardanelle, Jimmy Witt, said they have been discussing and asking for this since April.

"This is going to give us that legitimacy, you might say, to have good accurate data to the people," he said.

"Nobody knows our people better than local elected officials, and so if we can get the accurate numbers and accurate information, then we can get it to them quicker and more efficiently," he said.

According to the table, the city of Dardanelle has had 303 positive cases with 6.67% of their population affected.

Witt said this doesn't alarm him because a lot of these numbers are coming from the poultry factory, nursing homes, and the fact that their zip code goes outside city limits.

"In relative to the overall population, that's not really bad. Right now, if you look at our overall positive cases in the whole county, we're doing pretty good. I feel like we've done well," he said.

The mayor just wants to encourage his people to not panic.

"I just need everybody to take a breath, we're going to get through this at some point. We just all need to work together and do everything we can to try and protect each other," he said.

RELATED: Where to find free and fast COVID-19 testing sites in central Arkansas

Dr. Thompson said they plan to update city rates on the website and hope to add active cases within the next couple of weeks.

If your town has fewer than 10 positive cases, it won't be on the list.