The White House abruptly announced that President Donald Trump would be holding a press conference on Friday at 1 p.m. Eastern. 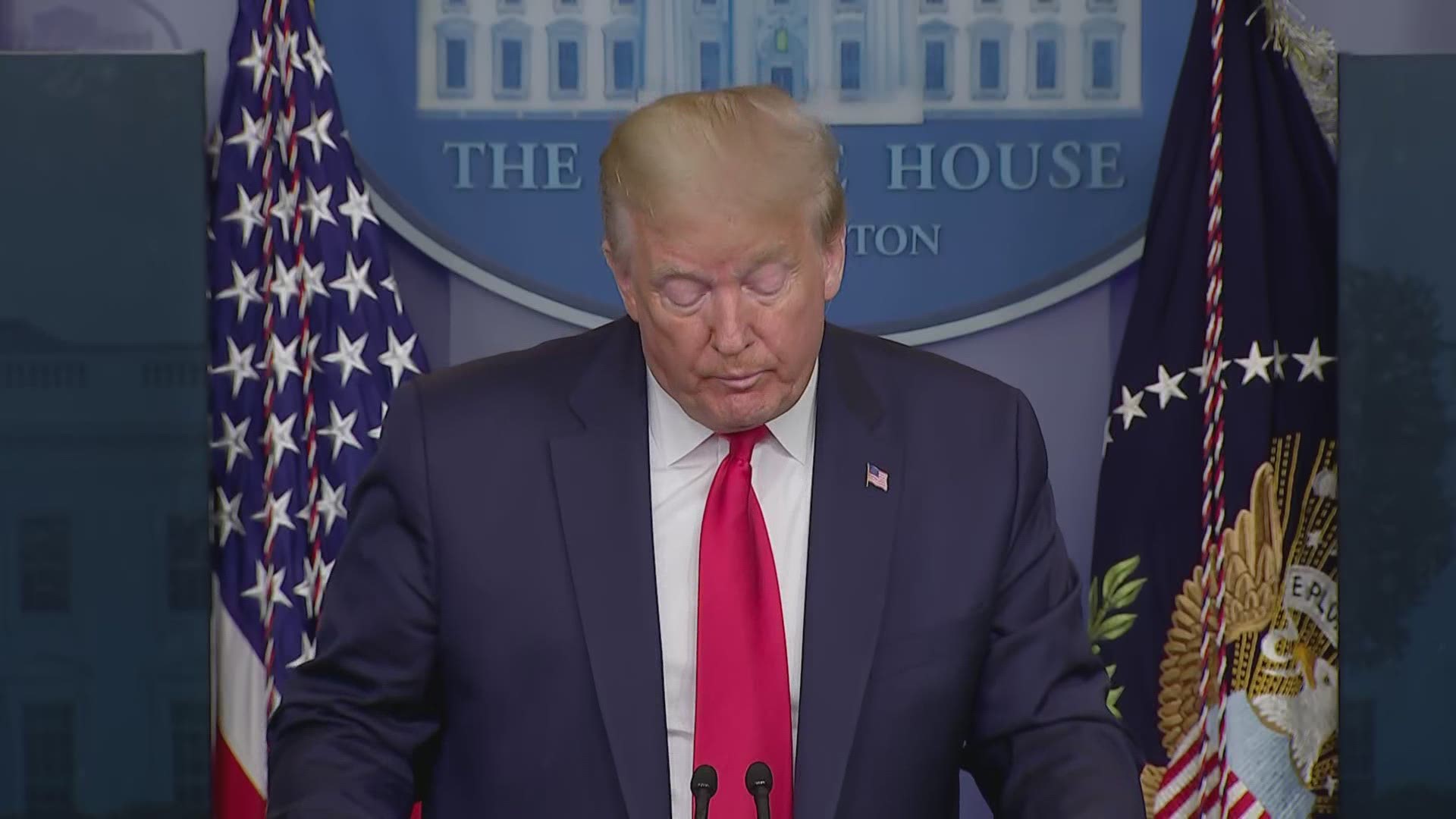 WASHINGTON — President Trump says churches and other houses of worship should be considered essential, and allowed to open during the coronavirus pandemic.

During an abrupt White House press briefing Friday afternoon, he announced that governors should let places of worship to open "right now," because the country needs more prayer.

Trump then left without taking questions from reporters, and Dr. Deborah Birx of the White House coronavirus task force came up to the podium to discuss deaths from COVID-19.

“Today I’m identifying houses of worship — churches, synagogues and mosques — as essential places that provide essential services," Trump said during the hastily arranged press conference Friday. He said if governors don't abide by his request, he will “override" them, though it's unclear what authority he has to do so.

The Centers for Disease Control and Prevention had prepared a draft of reopening guidelines for churches and other houses of worship weeks ago that included measures like maintaining distance between parishioners and limiting the size of gatherings.

But that guidance had been delayed for more than a month by the administration until Trump abruptly reversed course Thursday.

When asked how or what authority the president has to overrule governors' to reopen churches, press secretary Kayleigh McEnany said it's a hypothetical situation that they'd oppose Trump, and turned it on reporters, saying they seemed to want to keep places of worship closed. Several journalists there said they resent that statement.

RELATED: Biden: If you can't figure out if you're for me or for Trump, ‘you ain’t black’

Following Trump's announcement, the CDC released new guidelines for communities of faith on how to safely reopen, including recommendations to limit the size of gatherings and consider holding services outdoors or in large, well-ventilated areas.

Public health agencies have generally advised people to avoid gatherings of more than 10 people and encouraged Americans to remain 6 feet (1.8 meters) away from others when possible. Some parts of the country remain under some version of remain-at-home orders.

In-person religious services have been vectors for transmission of the virus. A person who attended a Mother’s Day service at a church in Northern California that defied the governor’s closure orders later tested positive, exposing more than 180 churchgoers. And a choir practice at a church in Washington state was labeled by the CDC as an early “superspreading" event.

But Trump on Friday stressed the importance of churches in many communities and said he was “identifying houses of worship — churches, synagogues and mosques — as essential places that provide essential services.”

“Some governors have deemed liquor stores and abortion clinics as essential” but not churches, he said. “It’s not right. So I’m correcting this injustice and calling houses of worship essential."

“These are places that hold our society together and keep our people united,” he added.

Dr. Birx, coordinator of the White House coronavirus task force, said faith leaders should be in touch with local health departments and can take steps to mitigate risks, including making sure those who are at high risk of severe complications remain protected.

“There’s a way for us to work together to have social distancing and safety for people so we decrease the amount of exposure that anyone would have to an asymptomatic," she said.

A person familiar with the White House’s thinking who spoke on condition of anonymity to discuss internal deliberations said Trump had called the news conference, which had not been on his public schedule, because he wanted to be the face of church reopenings, knowing how well it would play with his political base.

Churches around the country have filed legal challenges opposing virus closures. In Minnesota, after Democratic Gov. Tim Walz this week declined to lift restrictions on churches, Roman Catholic and some Lutheran leaders said they would defy his ban and resume worship services. They called the restrictions unconstitutional and unfair since restaurants, malls and bars were allowed limited reopening.

Some hailed the president's move, including Kelly Shackelford, president of the conservative First Liberty Institute.

“The discrimination that has been occurring against churches and houses of worship has been shocking," he said in a statement. "Americans are going to malls and restaurants. They need to be able to go to their houses of worship.”

But Rabbi Jack Moline, president of Interfaith Alliance, said it was “completely irresponsible” for Trump to call for a mass reopening of houses of worship.

“Faith is essential and community is necessary; however, neither requires endangering the people who seek to participate in them,” he said. “The virus does not discriminate between types of gatherings, and neither should the president."

Rhode Island Gov. Gina Raimondo, a Democrat, made clear that churches and other houses of worship will not resume in-person services in her state until at least next weekend and said she was skeptical Trump had the authority to impose such a requirement.

“It’s reckless to force them to reopen this weekend. They’re not ready,” she said. “We’ve got a good plan. I’m going to stick with it.”

New Hampshire Gov. Chris Sununu, a Republican, said he would review the federal guidance, while maintaining a decision rests with him.

"Obviously we’d love to get to the point where we can get those open, but we’ll look at the guidance documents and try to make some decisions rather quickly, depending on what it might say,” he said. “It’s the governor’s decision, of course.”

The CDC more than a month ago sent the Trump administration documents the agency had drafted outlining specific steps various kinds of organizations, including houses of worship, could follow as they worked to reopen safely. But the White House dragged its feet, concerned that the recommendations were too specific and could give the impression the administration was interfering in church operations.

The guidance posted Friday contains most of the same advice as the draft guidance. It calls for the use of face coverings and recommends keeping worshippers 6 feet from one another and cutting down on singing, which can spread aerosolized drops that carry the virus.

But there are some differences.

The draft guidance discussed reopening in steps. A first phase would have limited gatherings to video streaming and drive-in services. Later phases allow in-person gatherings of limited size and only when social distancing precautions could be followed. The new guidance has no discussion of such phases.

Another difference: The draft guidance said everyone who attends a service should wear a face covering, while the new guidance says masks should be used when social distancing cannot be maintained. 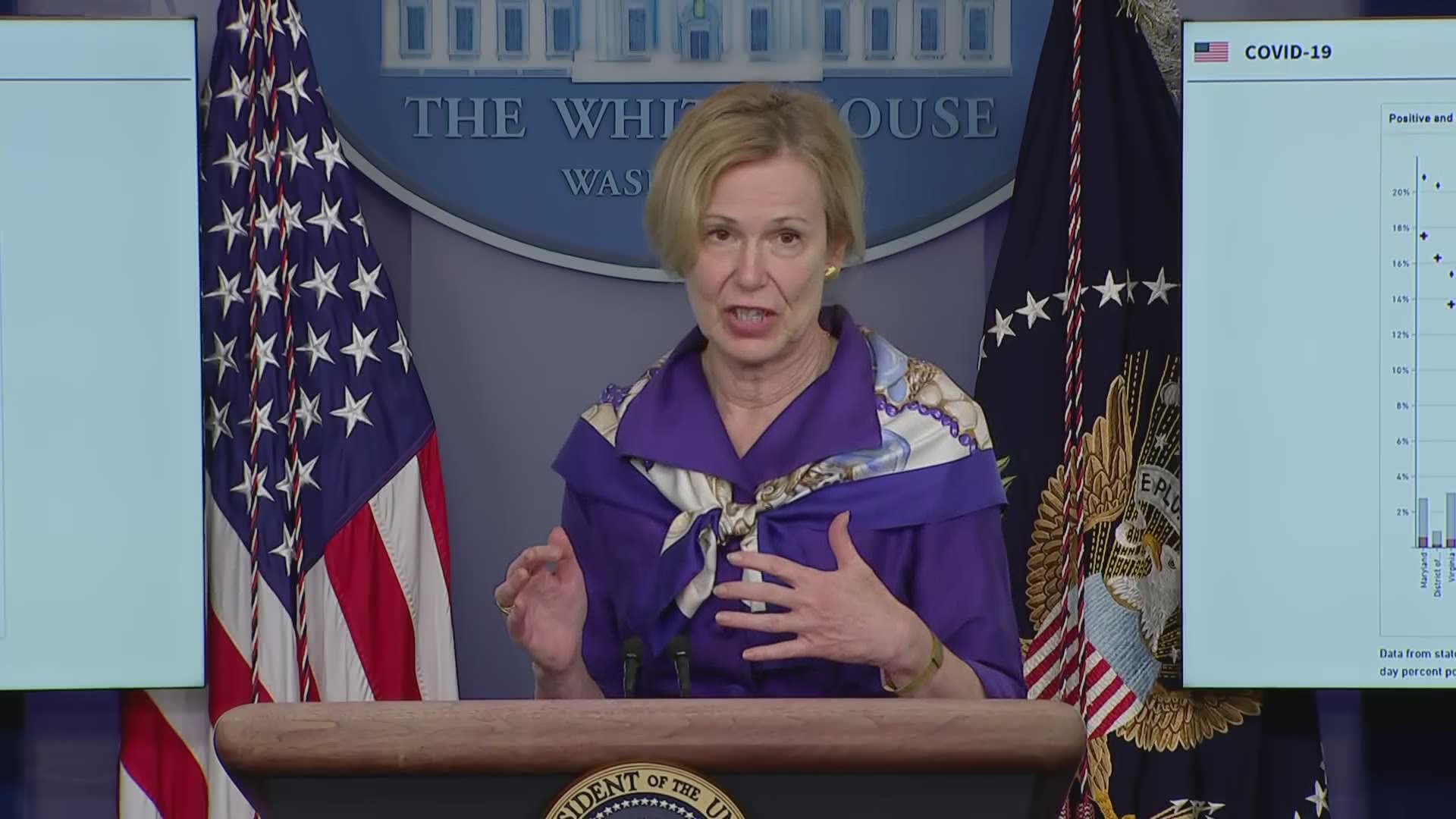