Holding out for a heart: St. Augustine 1-year-old continues to wait for heart transplant after a year in the hospital

Phoebe was born with a heart defect that caused the left side of her heart to not fully develop, so her entire heart relies on the right side to keep her alive. 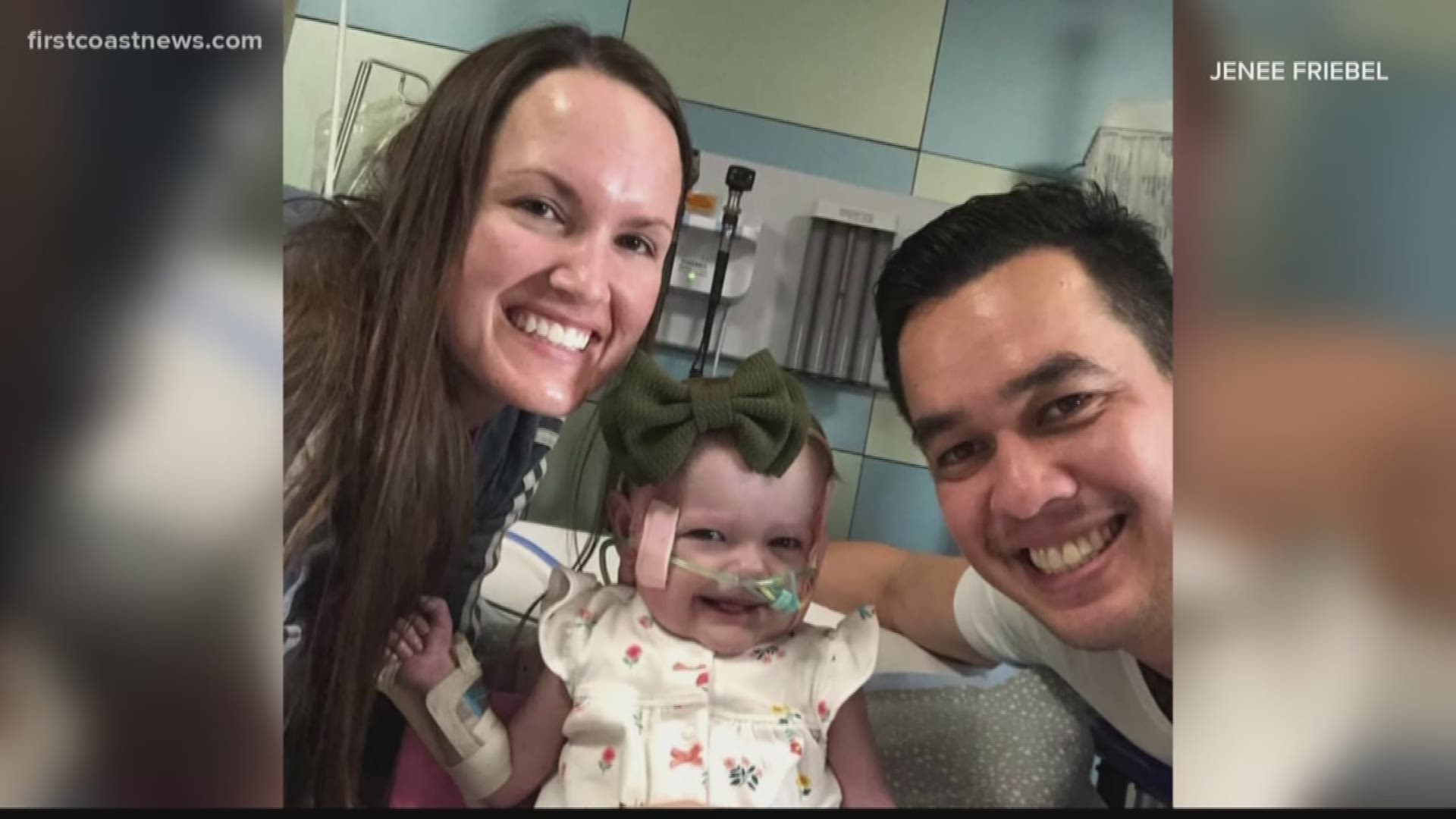 A St. Augustine baby has barely left the hospital since she was born. Phoebe Friebel turned one while in the hospital in early February. It's the same month dedicated to spreading awareness about congenital heart defects like her's.

Phoebe got an artificial heart in September at Shands Children's Hospital in Gainesville. First Coast News talked to her parents while she was in surgery then. We spoke with them again Wednesday as they continue to wait for a real heart for their daughter.

Phoebe was born with a heart defect that caused the left side of her heart to not fully develop, so her entire heart relies on the right side to keep her alive.

"You don't know what you're going to be going through until you're actually living it," Phoebe's mom, Jenee Friebel said.

Phoebe has spent nearly her whole first year in the hospital. She spent Thanksgiving, Christmas, New Year's Eve and most recently, her birthday, in the hospital. Her parents have documented the journey.

That journey included a painful false alarm in December.

A match, they thought was coming, after months of waiting.

"After they got her completely asleep and incubated in the OR, we get the call basically stating the heart transplant isn’t going through because the heart isn’t as well as they thought it was," Jenee said. "It was definitely crushing. We just said that wasn't really meant to be. That wasn't Phoebe's perfect heart, so we've been waiting this long, we can wait longer until they find a perfect match."

Since then, Jenee said her daughter has had more downs than ups.

"Monday, her lungs, she has always had pretty sick lungs, they just decided to ... that was the day they were going to give out," Jenee said. "She became unresponsive, so she stopped breathing," she said.

Doctors were able to stabilize Phoebe, and put in a breathing tube.

"If an offer was to come about [for a heart], they wouldn’t accept it right now because she’s too sick and she probably would not survive a heart transplant right now," Jenee said.

"I feel like it [heart defects] should be talked about all the time because so many new parents like us had no clue that it even existed," she said.

Holding onto hope that a heart will be on its way.

"This happened for whatever reason," Jenee said. "I don’t know what reason it is, but I’m hoping this was to try to strengthen her lungs and after she recovers from this, maybe her perfect match will come in and we get a heart and her lungs will be in good, Phoebe condition and we can get her heart and go home soon."

Phoebe will be at Shands until she gets that new heart. A GoFundMe page has been set up to help her family pay for gas and medical bill expenses.