Stop the Bleed equips teachers to save lives during tragedy

Being able to apply a tourniquet could save someone's life in the event of a tragedy like the Florida school shooting on Feb. 14. 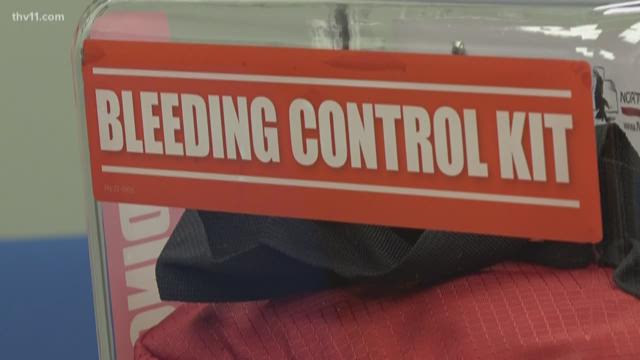 LITTLE ROCK, Ark. (KTHV) — A tragedy like the Florida school shooting happens far too often. While we can't always prevent it, we can control how we respond. Arkansas schools are preparing for trauma with life-saving tools.

The Arkansas Stop the Bleed program started in 2014. First, law enforcement officers were trained in bleeding control kits. Now, they're getting into schools.

"The ultimate outcome of that emergency is going to take place in the first five minutes, much quicker than the ambulance arrives," Clayton Goddard, MEMS Special Operations Supervisor, said.

That's why Arkansas Stop the Bleed is working to get bleeding control kits all across Arkansas schools. Each kit contains five tourniquets.

"It’s a great tool that gives us time," Greg Thompson, MEMS Operations Director, said. “A tourniquet can stay on up to six hours.

Thanks to grants, already 300 Arkansas schools have been trained and will receive a kit.

"This is a seed for us. Once they see the training, once they see the need for this, we’re hoping there will be other funding sources to help us put more of these in schools," Thompson said.

School nurses can participate in the Stop the Bleed program for free. In return, they teach others on staff and receive a bleeding control kit for their schools.

MEMS has 400 bleeding control kits ready to send to Arkansas schools next week.

“It’s taken these types of incidents, mass casualties, mass shootings in the United States to say ‘how do we fix this problem’ and we realize the bystander or responder can make a difference by applying direct pressure to stop the bleeding," Goddard said.