"He regrets very very much having...just been duped by the president," said Al Watkins, attorney for Jacob Chansley also known as the 'Qanon Shaman' 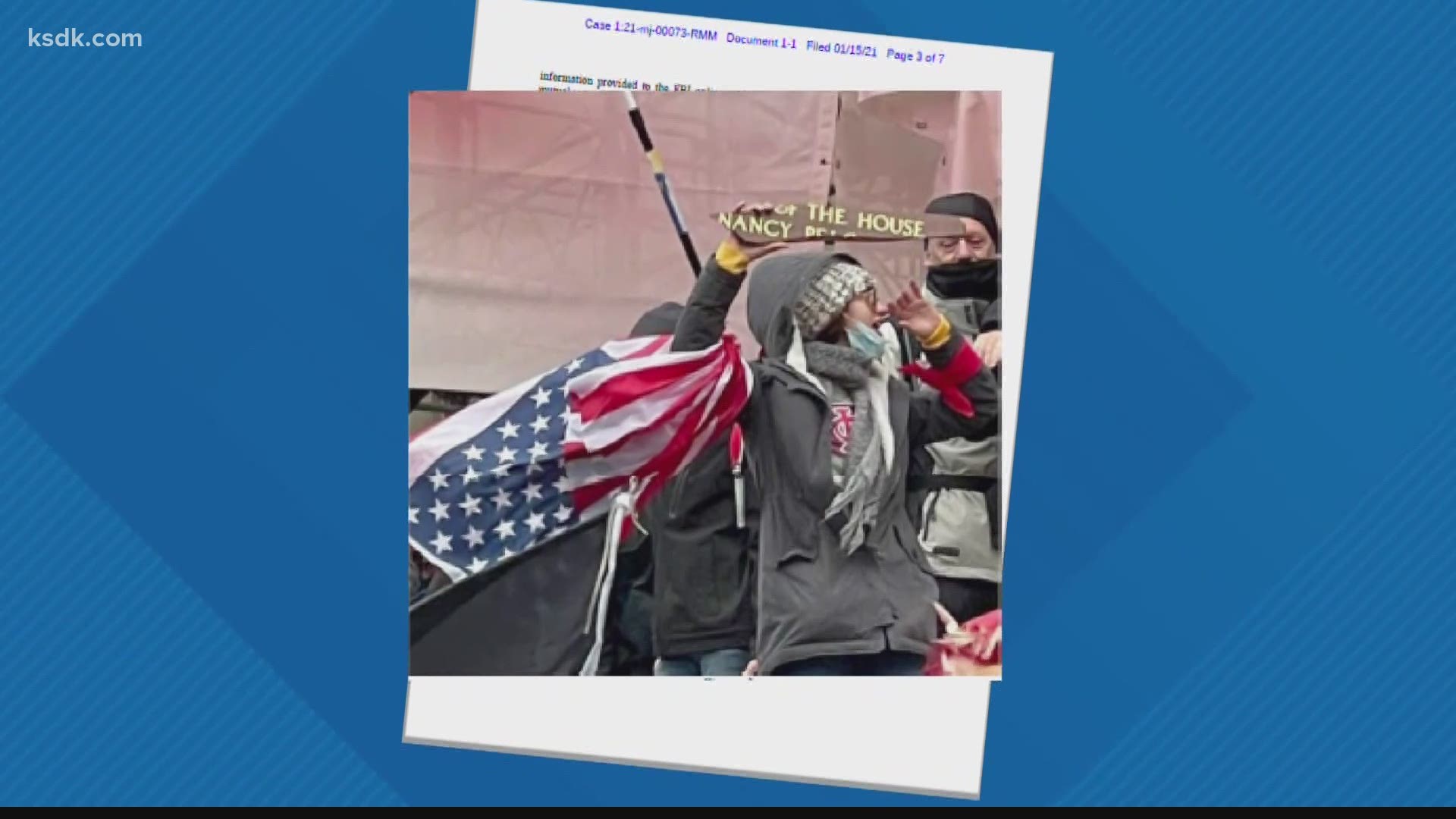 ST. LOUIS — The number of arrests associated with the riot at the U.S. Capitol on Jan. 6 continues to grow.

On Wednesday, two men from Florida with ties to a far-right extremist group were arrested for taking part in the siege.

More than 116 people from around the country are now facing federal charges.

A few of those people arrested have ties to the Midwest region. That includes Richard "Bigo" Barnett, from Arkansas, who was seen reclining with his feet on Nancy Pelosi's desk during the unrest.

Closer to home, there's Emily Hernandez of Sullivan, Missouri. She was seen in a video clip holding a piece of a wooden sign that read “Speaker of the House Nancy Pelosi.”

"She's a 21-year-old girl and she's got her whole life ahead of her. She knows this was obviously a mistake and she's ready to move past it," said Ethan Corlija, Hernandez's attorney.

Hernandez turned herself into the FBI this week on charges of disorderly conduct, knowingly entering or remaining in a restricted building and disruptive conduct in the Capitol buildings. Hernandez was released without bond. No date has been set for her next court hearing.

The FBI also is looking for a man seen in the same photo as Hernandez wearing a Blues hat. And he could be local as well. The I-Team got in contact with the man. He told the I-Team, "I'm not answering any questions about that."

With the possibility of a presidential pardon off the table, St. Louis attorney Al Watkins is lining up his client's defense strategy.

Watkins is representing perhaps the most recognizable figure from the unrest — Jacob Chansley, 33, also known as the "QAnon Shaman."

"Let's roll the tape. Let's roll the months of lies, and misrepresentations and horrific innuendo and hyperbolic speech by our president designed to inflame, enrage, motivate," said Watkins. "What's really curious is the reality that our president, as a matter of public record, invited these individuals, as president, to walk down to the Capitol with him."

Watkins said President Trump's inaction was a wake-up call for some, including his client.

"He regrets very, very much having not just been duped by the president, but by being in a position where he allowed that duping to put him in a position to make decisions he should not have made," said Watkins. "As to my client, the guy with the horns and the fur, the meditation and organic food... I'm telling you that we cannot simply wave a magic wand and label all these people on Jan. 6 the same."

Both Watkins and attorney Corlija said they've been contacted by several people involved in the Capitol unrest for representation. Watkins said as a matter of practice, he cannot say any more than that.