A year before the shooting in Columbine, students at Westside Middle School in Jonesboro had to face the tragic reality of a school shooting that took the lives of five people and injured 10 others. 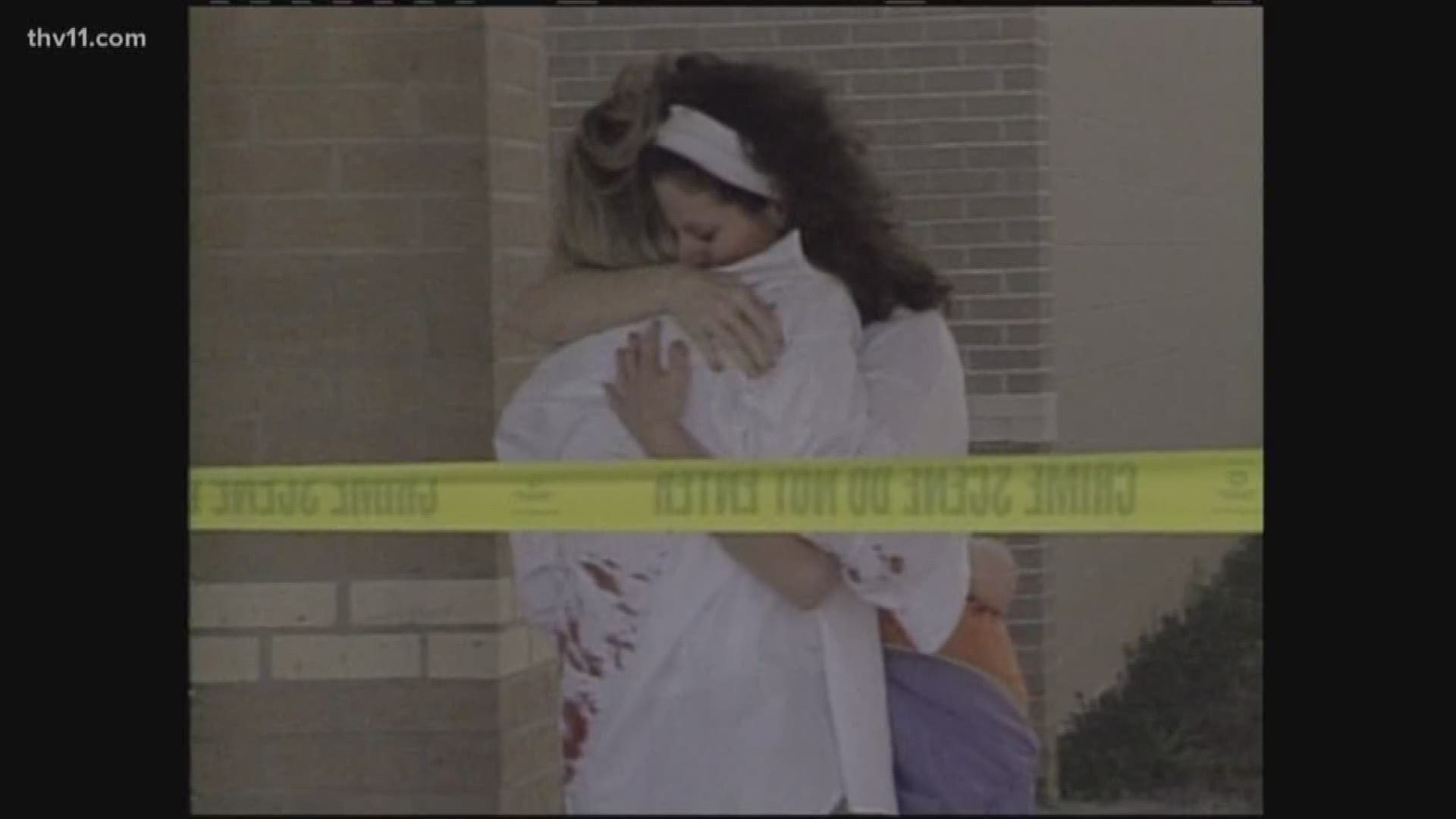 Just three months into 2018, the United States has seen 17 school shootings where someone was either injured or died from their injuries.

It could be easy to ignore the devastating headlines and say, "That could never happen here in Arkansas." But the fact is, it already has.

Twenty years ago on March 24, 1998, five people were shot and killed at Westside Middle School in Jonesboro.

The students had just returned from spring break. They had no idea the horror they would face when class was back in session.

"I was just a couple of classes down in this hallway here," Tristan McGowan told us, pointing at an entrance to the school. "We'd all come out of this door and came out into this area here whenever the fire alarm was pulled."

McGowan was only 13 years old when classmates Andrew Golden and Mitchell Johnson opened fire on the crowd of students.

"They were just on the other side of that wood fence line there. That's where they were set up at,” McGowan recalled.

After Golden went inside the school to pull the fire alarm, he and Johnson opened fire on the students as they began exiting the school. Natalie Brooks, Paige Ann Herring, Stephanie Johnson, Brittheny Varner and their teacher, Shannon Wright, were killed and 10 more were injured.

In an interview just days after the shooting, McGowan told a reporter he didn't "want to be outside at recess at school anymore." When asked why, he replied with one word, "Scared."

The only reminder of what happened 20 years ago is a memorial garden. The pavilion is supported by five beams that form a cross, which honor the lives of the five victims that were lost. Every sidewalk has been replaced. A plaque said it is so no child has to walk where others have perished.

McGowan, who was shot under his right arm, was one of 10 injured that day.

"[The bullet] hit me underneath my arm and slung me around a little bit," he said. "I didn't really know at the time what it was. I just knew that it was a pretty intense pain."

McGowan was shot by Golden, his own cousin.

He said there's no way to really process being shot by your own family member. The boys grew up together. He still remembers playing at Golden's grandfather's house, where Golden and Johnson stole the guns from.

"I don't know, there's no good way to go about thinking about it,” McGowan said.

"It's easier to tell you what I don't remember. I remember almost everything about March 24th,” Mike Walden said.

Walden was Deputy Prosecutor in 1998.

"I remember being in my office when the ambulances started to accumulate. We looked out and one ambulance after another passed us by until it started to get your attention where you think 'What the heck is going on?'" He and the other prosecutors followed the sirens to the middle school.

Once on scene, Walden said it was still chaotic. Some of the victims were still on ground as authorities investigated the area.

"While we stand there in the midst of that, another deputy sheriff is walking towards me with a piece of paper in his hand. He says, 'We've got two suspects in custody,'" Walden recalled.

Johnson was only 13 years old at the time of the shooting. Golden was 11.

The two were charged as juveniles for the five murders. Both were released from prison once they turned 21.

"These two guys are the only U.S. mass shooters that are either not dead or behind bars," our reporter Winnie Wright said to McGowan. "What do you think about the fact that these guys are able to live their own life?"

"I don't agree with it really whatsoever,” he said. “They should have both been tried as adults from the get-go."

Walden said the case was one a "first-year prosecutor” could win. The limitations were in the law, which only allowed kids that were their ages to be charged as juveniles.

In 1999, Arkansas was the first state to change its law, so that juveniles under the age of 14 could be charged as adults in cases of capital murder or murder in the first degree.

"It's not fair for them to be walking around free like nothing happened, and those five children and teacher, they're not here to walk with us anymore,” McGowan said.

Many of the students of the Westside shooting are now parents themselves. We spoke to several of them who weren't ready to go on-camera, even after all these years. Just because they were part of the same tragedy, doesn't mean they share the same opinions on how to fix the problem. There's so much we can learn from those who were there and how it affected their lives.

"When we bring a child into this world, obviously us being parents, we want to protect our kids," McGowan said, "but there's only so much we can do and still let your kid live a normal life and not scare them."

Across Arkansas, many districts aim to have school resource officers on every campus. That's a move both McGowan and Walden agree with. Since the Parkland shooting, some politicians have argued with arming teachers as one of the solutions.

McGowan supports the idea, saying he's "comfortable" with teachers being armed and that it would be "an extra sense of protection."

When asked about the Parkland students' response to their school shooting by organizing, rallying and asking for changes to gun laws, both men gave very different answers.

"They don't really know why they are marching,” McGowan said. “Some of them are marching for the wrong reasons. Everybody jumped on board with gun control and et cetera, but that's not where everything lies at."

Walden finds the Parkland students to be "an inspirational group" and he hopes they can "maintain resolve."

"I think it's going to be a challenge for them. It's a generational thing. I don't think they're going to get our present group of politicians to change their attitude,” said the retired prosecutor.

The two men also had differing opinions on the issue of gun control.

"When people tell me it's a mental health issue, I say, 'There's probably mental health issues in Japan and Australia. They don't seem to have these problems.' 'Well, it's violent video games.' Japan is wall-to-wall video games at this point. They don't seem to have this problem,” Walden reasoned. “The only lack of a common denominator is an organization in our country that is determined to put AK-47s or weapons of mass destruction in as many hands as possible."

McGowan argued that there would always be another weapon for people to cause violence with and that there was "no way to stop it."

Walden said there will always be the possibility of a school shooting, but something needs to happen to address gun violence in America.

But McGowan thinks the government is doing enough to protect schools from potential harm. He said officials are putting forth the effort to have school resource officers, but does think parents need to become more involved in their children's lives.

"It goes back to the parents and the kids at home and their home life," McGowan said. "The way kids are raised these days. It goes back to where it originates in my opinion."

"Some schools have the funds to have school resource officers. Some don't. I'm sure that in some ways, it is better. But the kinds of solutions I've seen don't really lead me to think they'll bring an end to school shootings,” Walden said.

It has been twenty years since the shooting, but McGowan still can't forgive the two men for what they did at Westside Middle School. The memories of that moment continue to haunt him and many others who were there that day.

“I mean, to some extent I have because forgiveness is the right thing to do, but part of me will never forgive them or forget about it," he said.

"A lot of damage has been done,” Walden said. “A lot of damage is done every time something like this happens. It goes a lot deeper, the tentacles go out a lot further than we could ever imagine."

Golden's last known address was in Missouri, only a few dozen miles northwest of the school. He later changed his name.

Johnson was released from federal prison in 2015 on an unrelated charge and is on supervised release in Texas.

As the discussion continues about what to do to keep students safe across the country, McGowan told us no legislators have asked the students of Westside what they think would help.