Thirteen years after Faulkner County residents started donating to build a shelter, they could get the final approval next week. Today was a good indication that it will happen, though perhaps not easily. 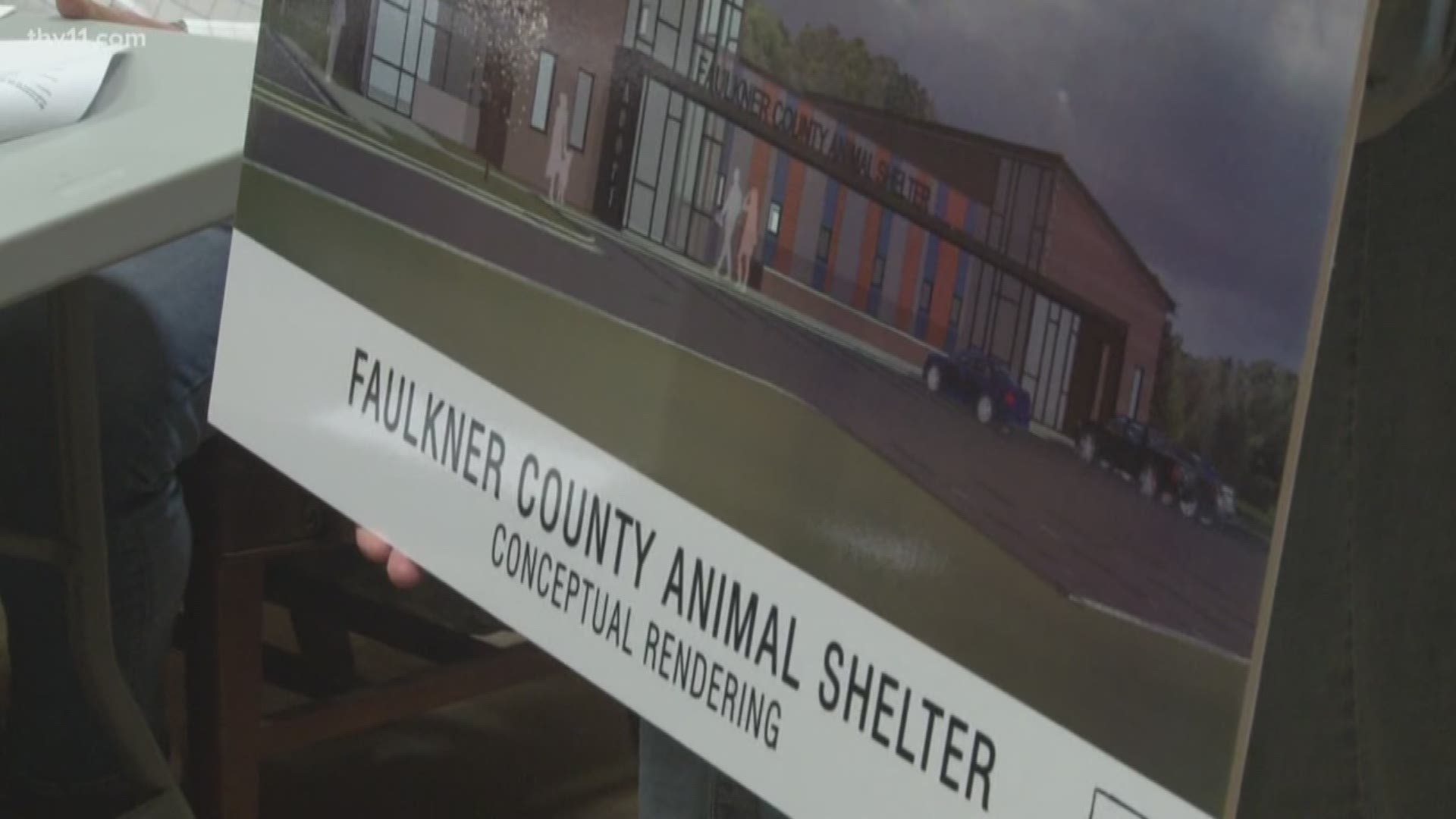 FAULKNER Co., Ark. (KTHV) - Faulkner County took a significant step toward getting an animal shelter Tuesday night, but it is still not there yet.

Clawson, who has spearheaded the volunteer effort to realize a shelter, pitched the committee along with quorum court member Bill Dodgen and architect Rik Sowell. Sowell presented his draft design for a shelter, while Clawson and Dodgen explained how much the tax would collect and why it would be important.

“I feel reasonably good about it,” Clawson said of the committee’s response. “There are some (justices of the peace) that we still need to contact, and the county needs to let them know that they feel like this is something that’s gonna be good for the county.”

Several animal rescue volunteers told the committee how a shelter would improve public safety and raise property values. Danielle Maddox, who runs ArkansPaws Animal Rescue, also explained the burden she carries since there is no place to take stray pets.

“We’re living off of credit cards supporting the county’s problems,” she said.

A volunteer in the City of Mayflower’s animal shelter explained how the county’s lack of a facility impacts the cities that have one.

“One of our biggest problems,” she said, “is: people realize we have a shelter and they’re starting to bring their animals to our city and dump them. We don’t have the means, and without a county shelter, it’s just gonna get worse and worse.”

Another rescue volunteer spoke about having several encounters with sheriff’s deputies who say there is nothing they can do about instances of animal abuse because there is no shelter to which they could take the animal.

“When animal abuse is a felony, and you can’t enforce it, that’s embarrassing,” she exclaimed. “When you have to have rescues enforce a felony.”

Clawson said the tax, which would be a quarter of a mill, would cost a family with a $100,000 home about $5 a year. One man said he should not be told how to spend his $5, but the primary objection raised by those at the meeting was that plans for the shelter are still vague.

“We’re talking about a piece of property that, hopefully it comes through the way we’re saying,” one man argued. “But if it doesn’t come through, where do we build it? And if we have to go looking for it, do we have to change the plans to build it?”

Sowell showed off a rendering, a map of the proposed shelter, and a conceptual floor plan. It would be located on the southeast side of the Interstate 40/Highway 65 interchange. The initial concept calls for a 10,000 square foot building with lots of surrounding green space and room to grow.

“It’s bigger than what we want, but it’s a place to start,” Clawson mentioned. She added that her initial belief was that the county would need 7,500-8,000 square feet. Sowell said he based his design in part on the Washington County Animal Shelter. Either way, Clawson said having a plan and recurring revenue to support it would allow her group to apply for grants and meet with potential sponsors.

“Faulkner County’s a beautiful county,” she said. “We live in Conway; it is a first-class place to live, and we need a first-class shelter. It’s not gonna be the Taj Mahal, but it’s gonna be adequate for decades.”

Faulkner County Judge Jim Baker and Conway Mayor Bart Castleberry have discussed partnering to build and operate the shelter, though no details have been announced.

The quorum court will make the final decision about the millage during its meeting at 7pm on Tuesday, December 18. If it puts the millage on the books, County Assessor Damon Edwards said no money would be collected until 2020. If it rejects the millage, Clawson said, “that will put us back years. Instead of 2020, it’ll be 2024. And then what are they gonna do?”

The quorum court will also vote, as part of a larger budget package, about whether to return approximately $500,000 to the capital fund for the animal shelter. The county used that money to purchase a building on South German Lane that was intended to become home to a shelter, but was instead leased to the Faulkner County Sheriff’s Office.