"It's bad. Some stores have milk and bread and some don't," the Arkansas Grocers & Retail Merchants Association Executive Director said. 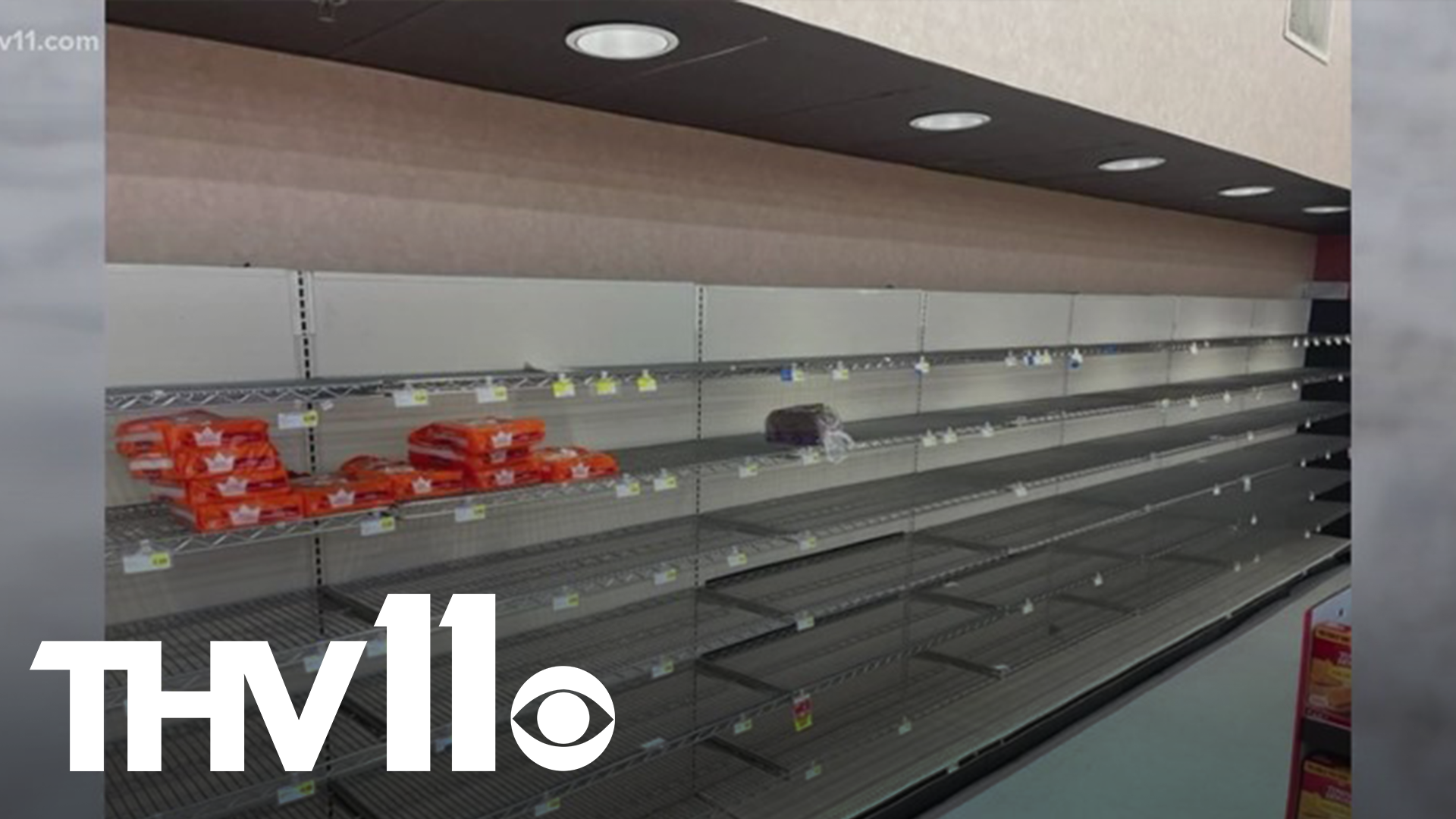 LITTLE ROCK, Ark. — We saw it first hand on Wednesday with the I-40 mess how all of this snow creates treacherous traveling.

Not only is it unsafe, but road conditions are also causing supply delays across the state, especially on local grocery stores.

We haven't seen empty shelves like these in grocery stores probably since last March when the pandemic first hit.

RELATED: Accident on I-40 in Lonoke County blocks all travel lanes

According to Steve Goode, Arkansas Grocers & Retail Merchants Association Executive Director, this snow is causing a delay in every single part of the supply chain.

"Everybody is scrambling, trying to figure out what to do to get groceries to consumers, but also to keep their teammates safe," he said.

It's the farthest thing from a win-win situation. Goode said they've had supply delays all week because the excessive amount of snow is making shelves in grocery stores empty and picked over.

"It's bad. Some stores have milk and bread and some don't," he said.

"We probably need 2 1/2 to 3 trucks to fill back up, so if our warehouse tell us we can have one, we're going to have to pick and choose what that one looks like," he said.

Most of Arkansas's independent grocery stores are supplied from surrounding states, according to Goode, where wholesalers are having problems with manpower.

"They've got employees that have to get to work and can't in many cases, and so I think that's also created a problem, you just can't get people there to load the trucks," he said.

But even if trucks get the supplies inside, Mike Brust, the Arkansas Trucking Association Director of Safety and Loss Prevention, said the delivery isn't an easy task.

"Anything like this that impedes the transportation network, it has ripple effects, of course," he said.

The snow is bringing several challenges to truck drivers on the road.

According to Brust, like accidents causing spoiled or damaged goods to electricity outages creating delays.

"We have drivers waiting at the facilities to get loaded and they can't because the area may be shut down," he said.

Every part of the supply chain just trying to weather this storm.

"It's a big network that anytime you have a delay or any kind of interruption in that, it affects a lot of different moving parts," Brust said.

Goode said the earliest we will see shelves fully stocked at grocery stores is probably the beginning of next week.

Remember, truck drivers and grocery store workers can't control the weather, so they ask for patience.

They say they're doing everything they can to get you the food you want delivered and back on the shelves.