Two polls this month suggest signs of hope for an O’Rourke gubernatorial campaign. But defeating Abbott remains a steep challenge. 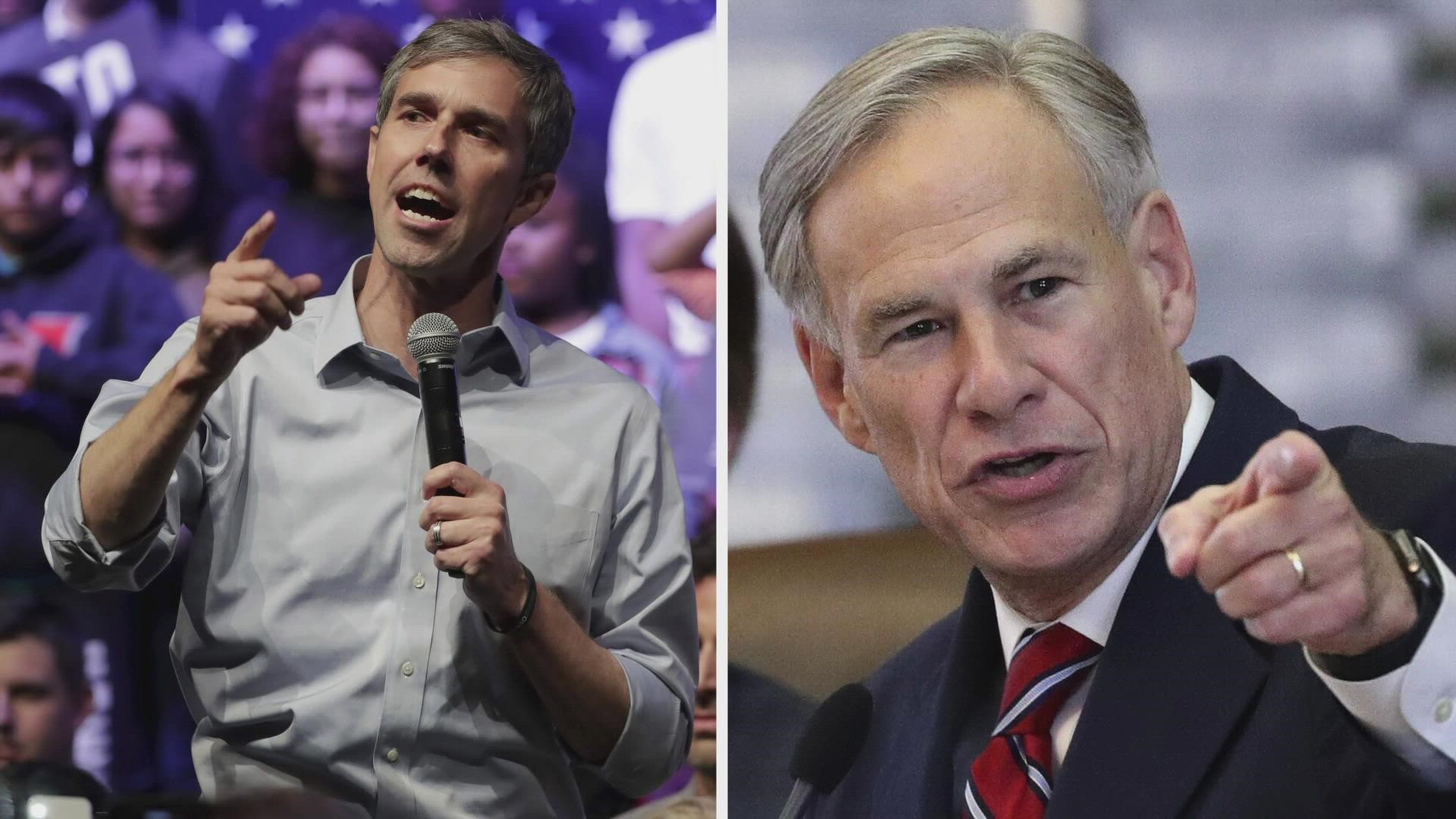 DALLAS — After months of anticipation, former U.S. Congressman Beto O’Rourke announced today that he is running for governor.

O’Rourke becomes the Democratic Party’s best shot in years at the state’s top job. He is a known entity across Texas and is an avid fundraiser with 76-million voter contacts.

In an interview this morning on the Y'all-itics political podcast, O'Rourke said he would take his campaign to all 254 counties.

O'Rourke's 2018 campaign for U.S. Senate against incumbent Ted Cruz was the most expensive senate race at the time in the country.

When asked how much this gubernatorial campaign would cost, Beto said: "It will likely be one of the most expensive gubernatorial races certainly in Texas history and maybe throughout the country, we are going to really depend on donors from across the state who can chip in."

Listen to the full conversation on the latest episode of Y'all-itics:

Beto’s name at the top of the Democratic ticket next year could drive turnout down ballot and motivate Texas voters to the polls.

Two polls this month suggest signs of hope for an O’Rourke gubernatorial campaign.

A survey by the Texas Hispanic Policy Foundation and Rice University’s Baker Institute shows O’Rourke and incumbent Greg Abbott virtually tied in a hypothetical head-to-head matchup. Abbott currently leads with 44-percent of support to O’Rourke’s 43-percent. That’s among voters who actually cast ballots in 2020. Ten percent of those polled in that survey remain undecided.

In another poll by the U.T. Politics Project and the Texas Tribune, Abbott leads O’Rourke in a hypothetical three-person race.

That survey of registered voters has Abbott with 46% to O’Rourke’s 37%. But this one also factors in a potential unnamed third candidate who 7% of respondents said they would choose. Again, 10% remain undecided.

Separately, a majority of Texans polled by UT/TT say they disapprove of the job Abbott is doing as governor.

Since the start of the pandemic, Abbott has shifted far right to appeal to the Trump supporters who make up the most vocal part of the Republican Party. Despite that hard turn right, Abbott has still drawn three conservative challengers in the 2022 Republican primary; Don Huffines, Allen West, and Chad Prather.

And another metric in the UT/TT poll could be favorable to O’Rourke. A majority of Texans polled this year said they think the state is on the wrong track.

But defeating Abbott, providing Abbott fends off his own primary challengers in March, remains a very steep climb. The incumbent governor has $55-million cash on hand to mount a voracious campaign.

In a statement Monday morning, Abbott's campaign was already on the attack.

"From Beto O’Rourke’s reckless calls to defund the police to his dangerous support of the Biden Administration’s pro-open border policies, which have resulted in thousands of fentanyl deaths, Beto O’Rourke has demonstrated he has more in common with President Biden than he does with Texans. Governor Abbott proudly supports the men and women of law enforcement, has deployed Texas National Guard and Texas Department of Public Safety personnel and resources to secure the border, and has created a business climate that has made Texas the economic engine of America. The last thing Texans need is President Biden’s radical liberal agenda coming to Texas under the guise of Beto O’Rourke. The contrast for the direction of Texas couldn’t be clearer," wrote Mark Miner, communications director for Abbott's re-election.

But the coming months will likely shape the governor’s race as the Texas power grid gets another test this winter, voting rights continues to play out on the national level, and the U.S. Supreme Court considers some high-profile cases.

“Well, I think 2022 has got a lot of variables that we aren't talking about now. One is a Roe versus Wade. What happens in June will be the dynamite issue. That will be a big predictor about what happens in state politics, congressional races, and state races across the country,” said Steven Pedigo, director of the Urban Lab at U.T. Austin, in a recent episode of Y’all-itics. “That's, for me, the one big issue that I don't think we have a clear understanding of how the implications.”

Firearms will also likely be an issue in the gubernatorial race after O'Rourke, running for president in 2020, said “Hell yes, we’re going to take your AR-15, your AK-47,” in response to the massacre that happened at a Wal-Mart in El Paso.

In the podcast interview, O'Rourke was asked whether he would seek to change any gun laws in Texas?

“I think most of us in Texas agree that we shouldn't have to worry about our family members or friends, or neighbors being shot up with weapons that were designed for use on a battlefield. And I also think most of us agree that the extreme gun laws Abbott has signed including a permitless carry bill that would allow anyone to carry farm, including the 35,000 Texans who'd been denied a license to carry, or would have their license to carry revoked or the tens of thousands more who knew better than to request one because law enforcement would have probably denied it. They know that we can't have those kind of extreme policies, so let's end permitless carry,” O’Rourke explained on Y’all-itics.

But he went further to establish his credentials on an issue that Republicans will likely use against him.

“Let's move forward with the things that most of us can agree on, like a universal background check or an extreme risk protection order or my friend Rhonda Hart, who lost her daughter in the Santa Fe High School shooting. She recommends that we have safe storage laws in in our state. We are a proud gun owning people here in Texas and like most of my fellow Texans, I grew up in in a household with guns, and I grew up learning the responsibility of owning and using firearm, and in my case from my great Uncle Raymond, who was in El Paso County Sheriff's deputy in jail captain. He's the one who taught us how to shoot, so let's use that knowledge and that experience. And make sure that we protect the Second Amendment and also protect the lives of our fellow Texans,” he continued.

The gubernatorial race is the third high-profile campaign for O’Rourke since he burst onto the statewide scene in 2017. That year, O’Rourke, then a little-known Democratic congressman from El Paso, electrified supporters in a campaign against Ted Cruz for a U.S. Senate seat. O’Rourke finished within three points of Cruz – the closest U.S. Senate race in Texas since 1978. O’Rourke briefly ran for the Democratic nomination for president in 2020.

Since ending those campaigns, O’Rourke has spent much of the year fighting against Republican efforts to change voting laws in Texas and across the country.

The last Democrat to win the governorship of Texas was Ann Richards in 1990.

Together, we can push past the small and divisive politics that we see in Texas today — and get back to the big, bold vision that used to define Texas. A Texas big enough for all of us.

In the announcement video, O’Rourke said in part:

“Those in positions of public trust have stopped listening to, serving, paying attention to, and trusting the people of Texas, and so they’re not focused on the things that most of us actually agree on.

“Instead, they’re focusing on the kind of extremist policies that really only divide us and keep us apart, and stop us from working together on the truly big things that we want to achieve for one another.

“It’s a really small vision for such a big state, but it doesn’t have to be that way, and I know that together we can get back to being big again.”