Visitors will visually experience places and moments that were integral in Mandela’s journey. 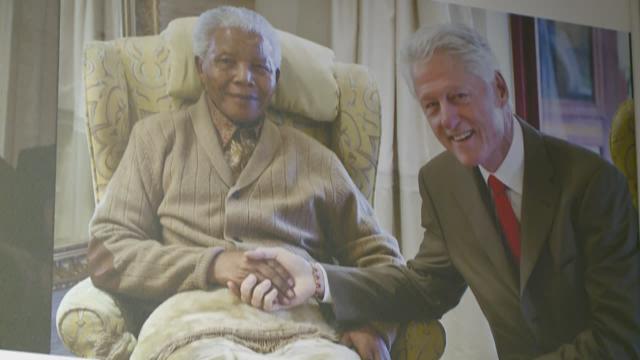 President Bill Clinton, founder of the Clinton Foundation and 42nd President of the United States, reflected on his memories and time working with the African leader.

"I loved working with him, although he could be a pain. If Mandela started the conversation with ‘My President’, that was a very bad sign,” President Clinton said as the crowd laughed.

Two leaders, their friendship, and a vision for a better future for everyone, now on display for the state to see. The center hopes these exhibits serve as an example of how to overcome challenges, Mandela: The Journey to Ubuntu and Art of Africa: One Continent, Limitless Vision.

"Mandela the Journey to Ubuntu provides a platform for a sharing of values so richly present in Mandela's life, to understand the role that forgiveness, leadership, truth and sacrifice play,” said Dr. Clarence G. Newsome, former President of the National Underground Railroad Freedom Center.

Visitors will visually experience places and moments that were integral in Mandela’s journey.

“We like to think we exist separate from others but we don't, the meaning of life is in relationship to others,” President Clinton said.

Many of the artifacts are from President Clinton's personal collection. Pictures demonstrate Mandela's leadership from prison, as president, and the work he continued afterward.

“He believed that if he ever dealt with people than something less than respect he would undermine the ability of his country to live and work as one,” said President Clinton.

Mandela The Journey to Ubuntu runs through February 19, 2018 and Art of Africa: One Continent, Limitless Vision closes February 11, 2018.