'I get to whisper to them, I love you' | Jason Reynolds on writing for youth, growing up in DC and his mission

This is how a man who read his first novel at 17 became the National Ambassador for Young People's Literature and is changing lives. 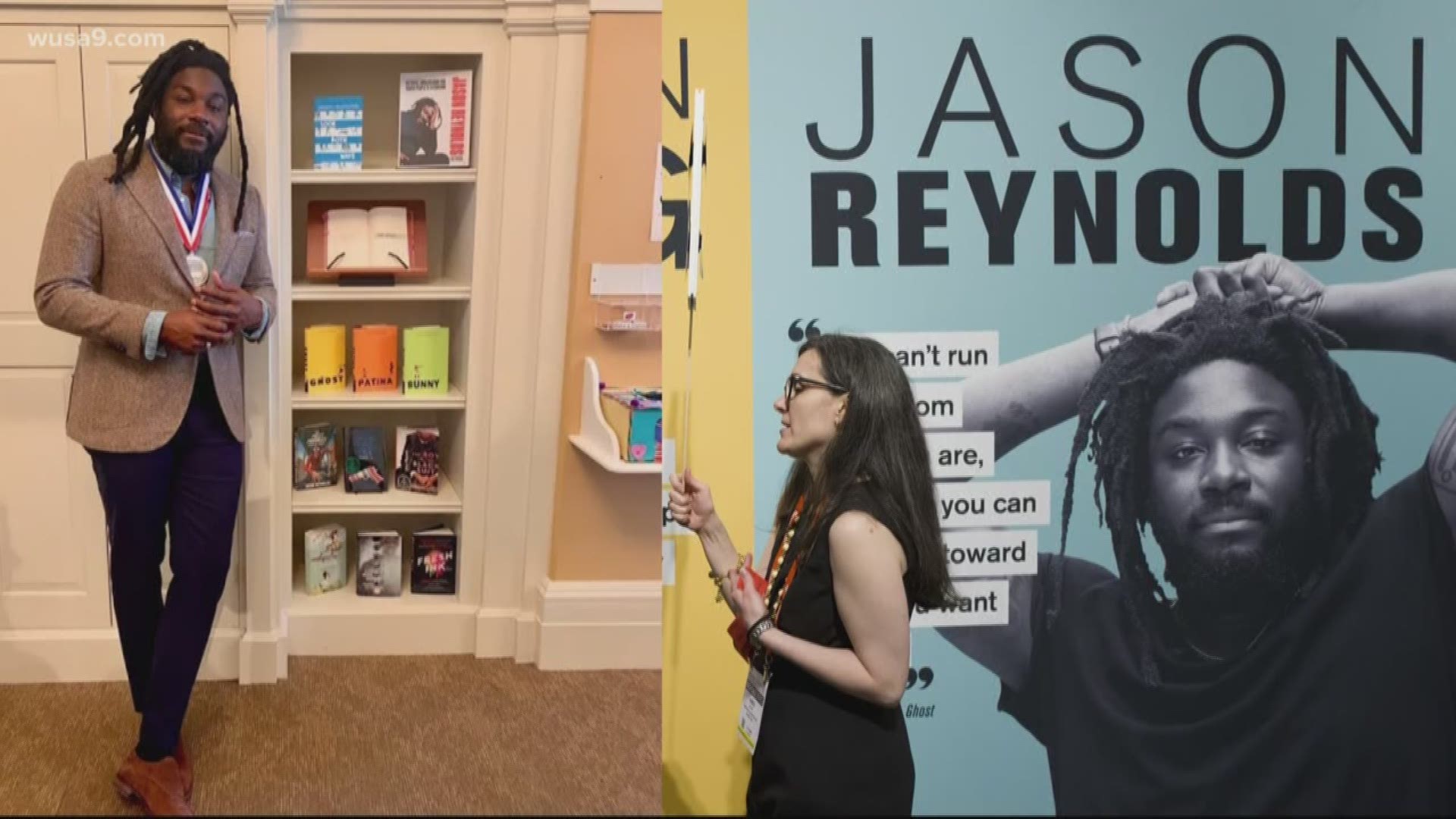 WUSA9’s Delia Gonçalves spent some time with Reynolds, whom the Library of Congress just named the new National Ambassador for Young People’s Literature.

But this interview was more of a reunion of sorts. Reynolds and Gonçalves first met nearly 15 years ago, when Reynolds was a UMD student and an up-and-coming poet, touring colleges and universities along the East Coast.

Reynolds said his love of writing blossomed not in class, but in his experiences and shows at the Nyumburu Cultural Center. He continued to hone his craft while trying out his entrepreneurial skills -- paying to publish 500 books of poetry and selling them on campus for a $5,000 profit.

But the young poet was exploring his art off-campus, too, and taking in the scene on D.C.'s U Street corridor.

It was the early 2000s and the strip once dubbed the "Black Broadway" was giving birth to a new generation of artists. That’s where he met Gonçalves’ husband and, eventually, her as well.

Gonçalves: "So when you were in the back of Bar Nun, the baby who wasn't allowed to drink, but your big brothers were on stage and you were listening to that poetry, absorbing everything – did you know one day this is where you would be?"

Reynolds: "You know, it's interesting. I want to say, 'Yes,' but I don't know. I think I was probably wanting it. That time in my life everything felt so kinetic, everything was so visceral. You were in a space when you were around all these talented writers, poets and musicians; creativity was just swelling and brimming at this particular time in D.C. and all I knew was I wanted more of that."

Reynolds said there are far more talented writers than him, but thinks he was chosen to speak to young people like him, who never really enjoyed the so-called classics like Moby Dick.

He said those books never spoke to him, as he could never see himself.

"I needed to see the details of my life," Reynolds said. "I think we really underestimate the value systems that come out of certain communities."

The son of an Oxon Hill teacher, Reynolds didn't read his first book cover to cover until he was 17 years old.

It’s hard to believe he wrote his first novel in 2014, because of how quickly he shot to stardom. In just four short years, he churned out seven more novels: New York Times bestsellers; national award winners; and even a book for Marvel Comics called "Miles Morales: Spider-Man."

Reynolds has earned numerous awards and honors – trophies that, he said, get tucked away under the couch. He’ll take them out, if someone asks, and then return them to their "rightful place."

He appreciates the accolades for the platform they have provided, but he said focusing on them will distract him from his mission.

Reynolds said kids don't hate books; they hate boredom. So, part of making his books exciting and relevant to kids is validating their own experiences and speaking to them in their own voices.

Gonçalves: "I heard you once said you hate the question, 'What do you want to be when you grow up?'"

Reynolds: "I honestly believe the question of 'What you want to be when you grow up?' is a question that is dismissive of childhood. America has a real hard time with children and elders because we see children and elders as half-formed things, so the way we talk about them is in verbiage that is small, right? Like, 'What do you want to be when you become a full-formed thing?' When we should be saying, 'What do you want to be right now? Who are you? Who are you right now? What are all the things you feel, desire and fight for today?'"

Reynolds knows his art alone is not going to save the world, but it might save that one black boy or girl from feeling like no one is listening.

"I get to whisper to them, ‘I love you, I see you, I know," Reynolds said. "'I know you're scared, and it's OK to be scared, and if you can't be scared out there you can be scared in here. Within the pages of this book, you can be who you wholly are.' And perhaps that might be empowering enough to at least add a bit of significance to their lives."

As they wrapped up the interview, Gonçalves, who remembers Reynolds as a talented and ambitious college student said, "Jason Reynolds. This is your life!"

Reynolds sighed and said, "It’s weird. Every day is a day full of gratitude. Even in the midst of the slog. Writing isn’t an easy thing. Matter of fact, writing is always a hard thing – at least for me. I think that it’s the difficulty of it, it’s special though. In the struggle; wrestling with language to figure out how to crack code that can crack the code in a reader."

RELATED: A new museum is set to open in DC next spring, and it's dedicated entirely to language