Debate continues over proposed 'armed presence' at school in Arkansas

The debate over school safety and who should get to carry guns on campus took center stage at two events Monday in Little Rock. 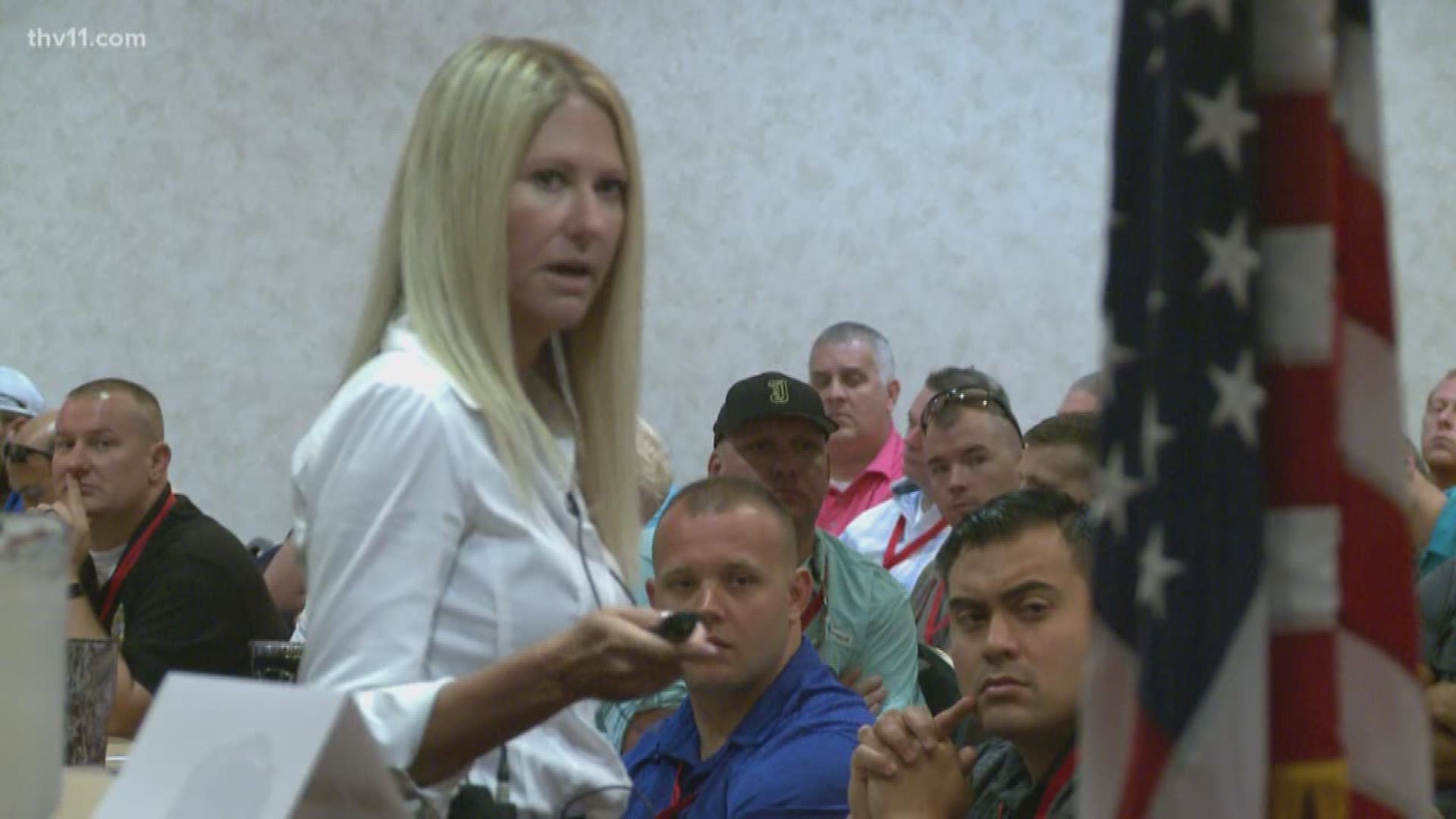 The debate over school safety and who should get to carry guns on campus took center stage at two events Monday in Little Rock.

School resource officers and other members of law enforcement started the morning at the Arkansas Safe Schools Conference. Advocates for arming teachers and others made a case to lawmakers at a meeting of the Joint Performance Review Committee in the afternoon.

“One of the preliminary recommendations of the commission is that no campus should ever be without armed presence,” said Dr. Cheryl May, the chair of Arkansas School Safety Commission. The task force appointed by Governor Asa Hutchinson in February issued a preliminary report last week.

The call for more armed officers would appear to be good news to the men and women who heard from the governor as well as a Connecticut mother whose child survived the Sandy Hook massacre in 2012. Officials appear to be ready to lean on SRO’s in the future.

“They're not just in there as a security guard,” said Richard Davies, a past president of the Arkansas Safe Schools Association and a White Hall police officer. “They're in there building relationships, working with these kids. Our deal is prevention.”

But the uniform praise for SRO’s came to a halt later at the Capitol when Dr. John Lott of the gun rights think tank Crime Prevention Research Center spoke to the committee.

“It's an amazingly boring job,” Lott said while questioning whether resources should be spent on putting one or a small number of officers on a campus instead of allowing teachers to train and carry weapons. “Somebody who is in uniform or readily identifiable as the person with the gun makes them a target.”

Lott compared the job of school resource officer to that of air marshal, where he says turnover is high. He also presented survey results that he said came from one of the largest law enforcement organizations that indicate armed officers overwhelmingly support letting teachers and other carry guns.

But members of gun control group Moms Demand Action question those numbers, as they have done at every turn whenever Lott testifies.

How dare Arkansas lawmakers allow this fraud to give testimony that will impact kids’ safety? https://t.co/SrCLxw6VvZ

Shannon, there are so many mistakes with your claims about universal background checks and crime. No academics would make the type of comparisons you make. See here. https://t.co/9Y6Yeq6vlV https://t.co/MWhdtk1Fs5

“The school resource officers association very strongly recently in this calendar year put out a press release saying that they do not support the arming of amateurs in schools,” said Austin Bailey, the lead for the local Little Rock chapter. “I think there was a lot of confusing and possibly misleading statements.”

Among the confused were Kathy Simpson and her 5-year-old daughter Josie Epperson. Simpson got a text alert from Moms Demand Action to come to the meeting, but then ducked out when one of the people testifying showed footage from inside the Parkland, Fla., high school where 17 students and educators died earlier this year.

“I feel like they're looking at it the wrong way,” Simpson said. “There are no statistics about accidental shootings by these people that come in trying to help these kids. It’s not going on yet, but when they have [the statistics] it’s going to be too late.”

Chairperson Sen. Missy Irvin (R-Mountain View) offered a sign-up sheet for other to speak, and members of the Moms Demand Action group waited for a chance, but the meeting adjourned without calling on them.

Narrator: “But they didn’t get to share it.” #arleg Joint Leg. Review committee adjourned without letting @MomsDemand speak, even after they put out a sign up sheet for public input. It seemed...uncivil. #arpx https://t.co/G3Qb852a8m