"We will have a police department that our communities view as legitimate, trusting and working with their best interest at heart," Arradondo told reporters. 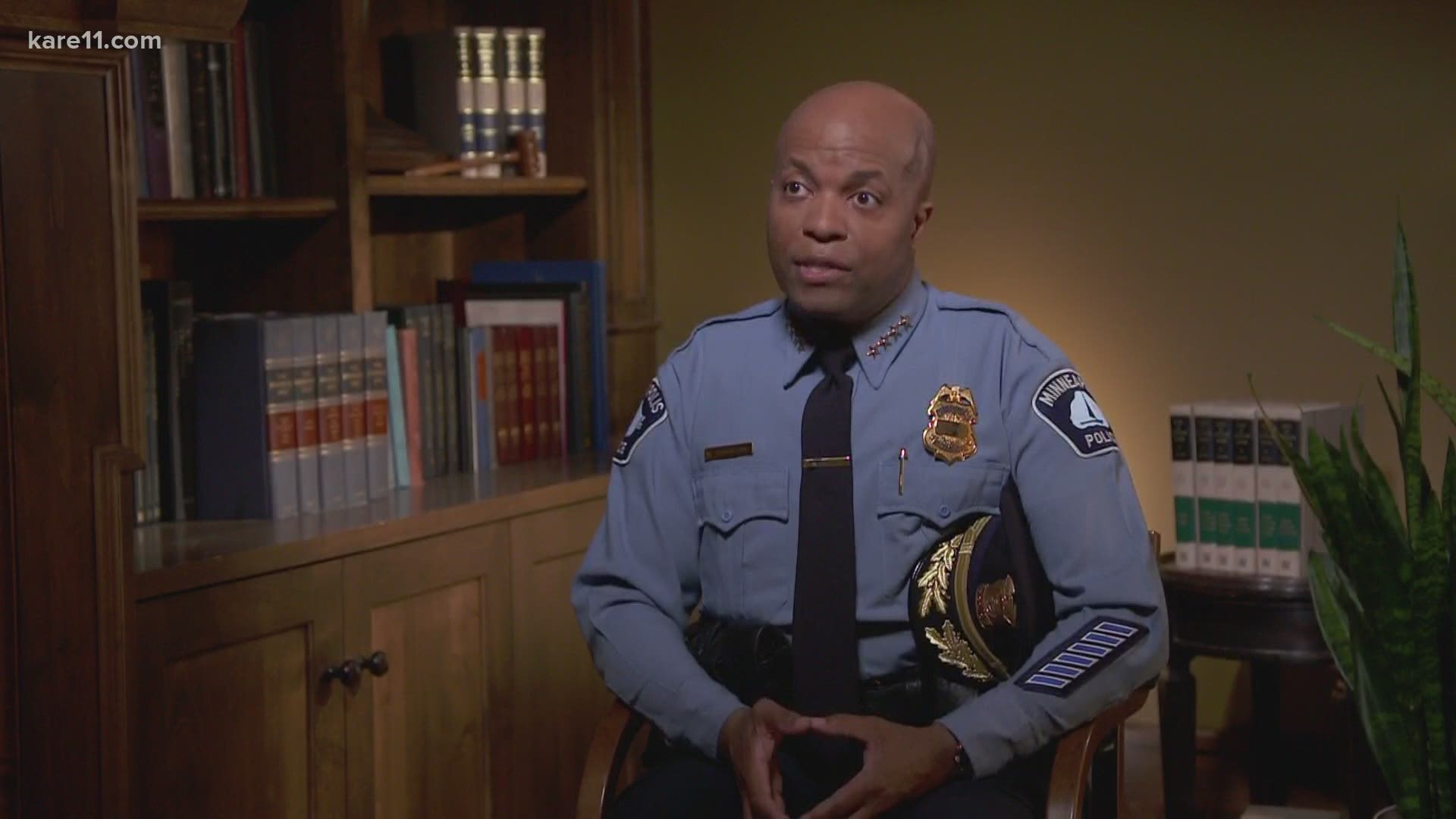 MINNEAPOLIS — After days away from the public spotlight Minneapolis Police Chief Medaria Arradondo is meeting with reporters Wednesday to address calls for his department to be defunded and disbanded, and to share his ideas on moving MPD forward.

"What our city needs now more than ever is a pathway and a plan that provides hope, reassurance and actionable measures of reform," Arradondo told reporters. "Because I work for and serve the people, this work must be transformational, but I must do it right."

Arradondo acknowledged that change will not happen overnight. 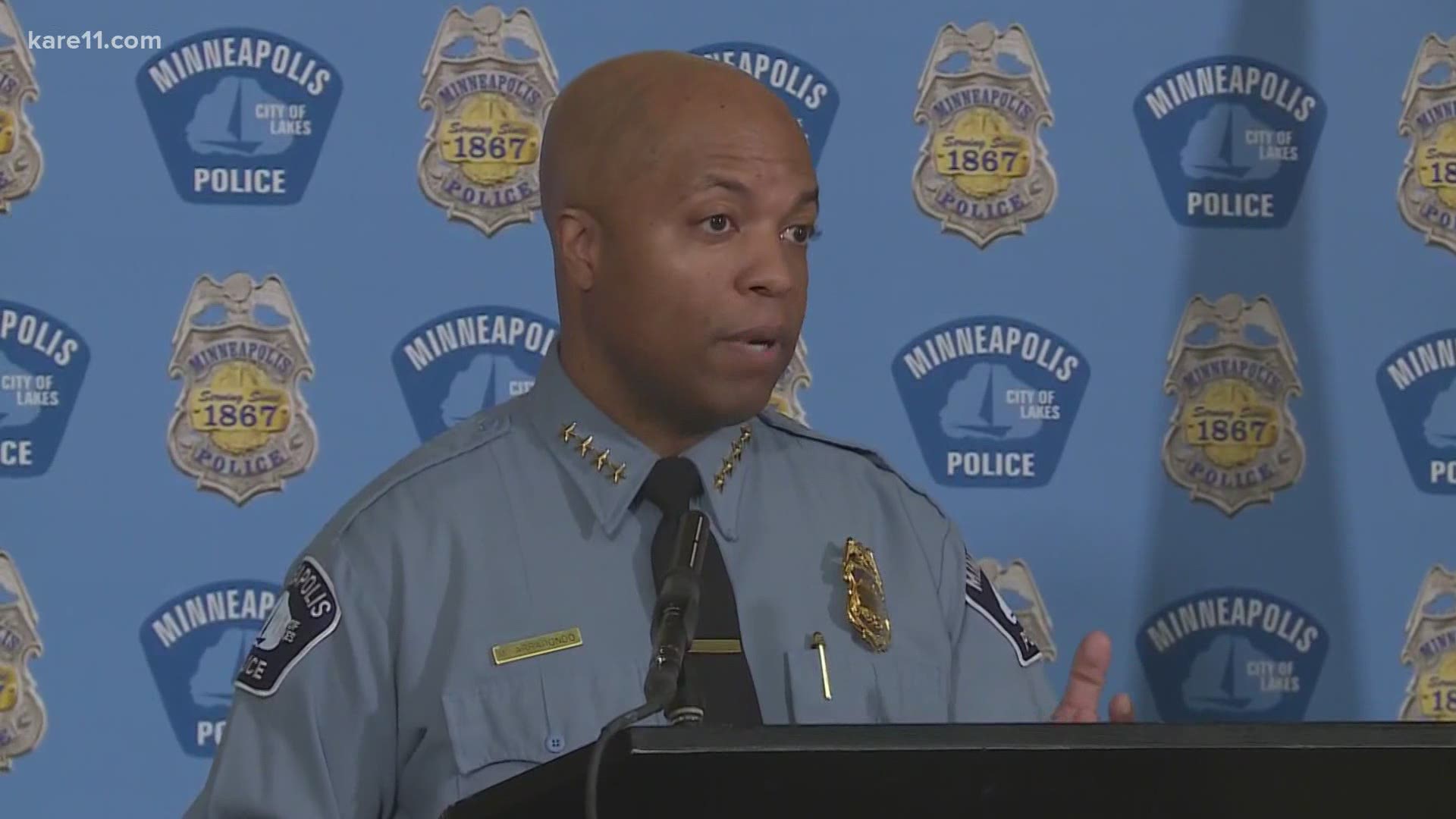 "We will have a police department that our communities view as legitimate, trusting and working with their best interest at heart," he said.

Arradondo acknowledged that race is "inextricably part of the policing system."

"Communities of color have paid the heaviest of costs and that is with their lives," he said. "And our children must be safeguarded from ever having to contribute to this horrific and shameful chapter of this country’s history."

He recalled as a child, looking up to the few African American officers he saw as heroes.

"History is being written now, and I am determined to make sure that we are on the right side of history," he said.

"It would be the greatest disservice in policing if we did not use the will and the inspiration ... to make some changes nationwide as it relates to racism," Arradondo said.

RELATED: A look at the history of racial covenants and housing discrimination in Minneapolis

When asked by reporters about Minneapolis Police Federation President Bob Kroll, Arradondo said they are having "very intentional" conversations. "There are going to have to be serious conversations moving forward," he said.

Arradondo said the two changes he's highlighting Wednesday are just a couple of "many more" to come. He said that he is "absolutely" able to reform the department, but he needs the community's support.

Mayor Jacob Frey responded to Arradondo's announcement, saying he is committed to a deep structural reform. Frey said he has "a lot of leverage" in current negotiations with the union for changes in policing.

"He is one of the primary reasons for that lack of trust and support," Frey said. "Lt. Kroll has not been helpful in any way shape or form to generating accountability and measures of reform that we've been trying to see through."

Frey said the policing reform needs to happen. "This really can't be optional."

Frey wants outside lawyers to identify problem areas in the police union's contract and make changes.

The union that represents Minneapolis police officers responded to Chief Arradondo's announcement that he's pulling out of negotiations with them in a statement Wednesday night.

The organization said they've always welcomed the opportunity to collaborate with the department to set clear expectations, train employees, and improve accountability.

The statement went on to acknowledge the need for change in the wake of George Floyd's death, but added that any changes must result from a collaborative effort between the federation and the department.

The union laid out a series of items they'd like MPD Chief Arradondo and Mayor Frey to do - including returning to negotiations.

Over the weekend, a veto-proof majority of the Minneapolis City Council publicly expressed support for defunding, and eventually replacing the city's police force with a more community-oriented public safety model. Rallies calling for defunding MPD drew thousands of supporters, and underlined how difficult it will be for police to earn back the public trust of some residents.

Arradondo said Wednesday that he's heard from other officers regarding the George Floyd death, "'Chief, that's not us, that's not who we are.' So they're going back out in that community to try and earn that trust."

Arradondo encouraged the public to continue filming police when they see something they think is wrong. "Record, call a friend, yell out, call 911," he said.

“We don’t just need a new contract with the police. We need a new compact between the people of Minneapolis and the people trusted to protect and serve – and we need to go farther than we ever have in making sweeping structural reform. Additional accountability between the people and the police needs to be matched with internal ability to closely monitor police behavior and intervene early to prevent more tragedy. I applaud the Chief’s courage, continued resolve to challenge the status quo, and clear message for the people of Minneapolis.”

Frey already said in a statement over the weekend that he will "work relentlessly" with Arradondo on "deep, structural reform and addressing systemic racism," but that he does not support abolishing MPD.

On Saturday when protesters stopped outside Frey's home and chanted for him to come outside. Frey did, and spoke to the crowd, which asked if he would commit to defunding the police.

“I am absolutely for a massive shift, a structural shift in how the police department functions, I’ll say it again," he said. "Am I for abolishing the entire police department? No I’m not and I’ll be honest about that too."

After hearing his response, the crowd booed Frey as he left.