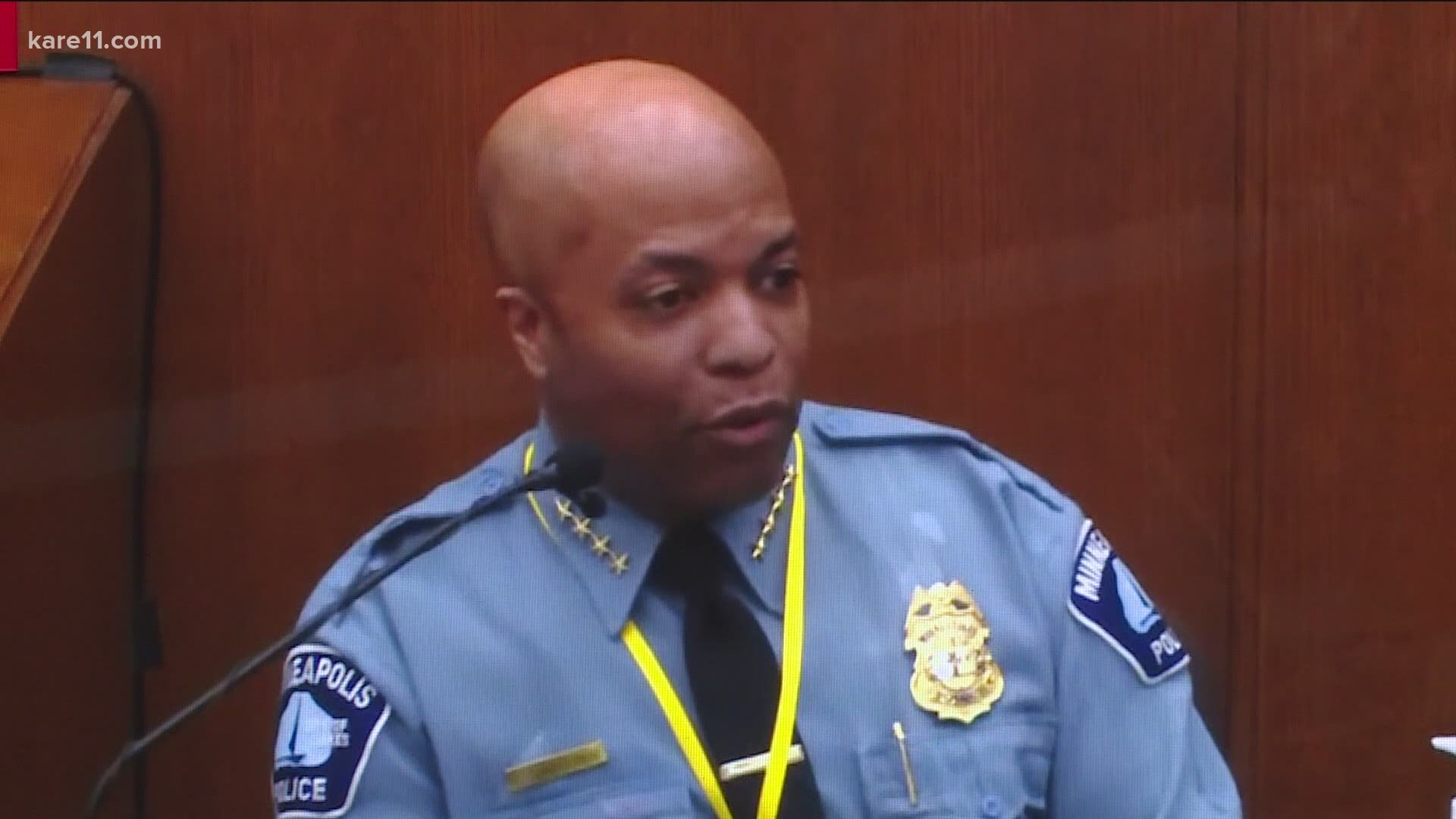 MINNEAPOLIS — When Police Chief Medaria Arradondo took the stand in the trial of Derek Chauvin on Monday, his testimony seemed to have more than jurors in mind.

"It felt like he was speaking directly to the people of this community and trying to emphasize what the core values of the department are," said Dr. Yohuru Williams, a professor of history and founding director of the Racial Justice Initiative at the University of St. Thomas.

Dr. Willaims says the chief's testimony condemning the actions of Chauvin is a significant and historic moment on its own, but he says the chief's explanation of MPD's Critical Decision Making Model, also holds potential for the future.

"I think that was really interesting in showing this kind of range of activity that officers are supposed to engage in as they encounter the public, to build trust," Dr. Williams said. "He has to convince the community that, even though you saw a massive departure from that protocol, on what happened last May, this is the protocol and we have to be able to trust that police officers are going to encounter the public by abiding by that protocol. But it's a fragile trust."

Dr. Williams says that fragile trust extends to the entire justice system, and it was on display in court last week.

"We see it both in witnesses Charles McMillan and in Donald Williams," Dr. Williams said. "This idea that as a person of color, particularly an African American male, one has to be very cautious in the way that they address authority figures, not to invite the stereotype of the angry black man or provoke this kind of resistance that comes when you're assertive and a man of color.

"We saw Charles McMillan in some sense, trying to caution George Floyd during the incident, just comply, go along because then they'll back off you. You also see that to a certain extent, although he's assertive, with Donald Williams on the stand, where he is very clear, that he is not angry."

Dr. Williams says that fragile trust was also clear in the observations of a much overlooked witness: former Speedway employee, Alisha Oyler.

"Her testimony, for me, was very compelling," Dr. WIlliams said. "Because in addition to all the other challenges that people at 38th and Chicago and so many other communities experience, the worst of it is when police come, as she put it, 'messing with people.'"

"We also saw it in that video (of the crowd). You had people speaking out but not being heard. That look on Derek Chauvin's face, in some sense, becomes a symbol of what we mean when [we] say that women and people of color in our society are often, not only marginalized, they're silenced."

According to Williams, "If we're ultimately going to live up to that aspirational model, we have to think about those elements that also contributed to this, which extend beyond the violence we saw visited on George Floyd's body."

Dr. Williams says he is encouraged by one development he's noticed outside of court so far. Community members have stepped up with online fundraisers to support some of the witnesses who have been traumatized by what they experienced. He says it's an example of how people can demonstrate the power of community and compassion through their actions.