We may be in a modern-day pandemic, but modern-day tools and processes are in place to secure the vote. 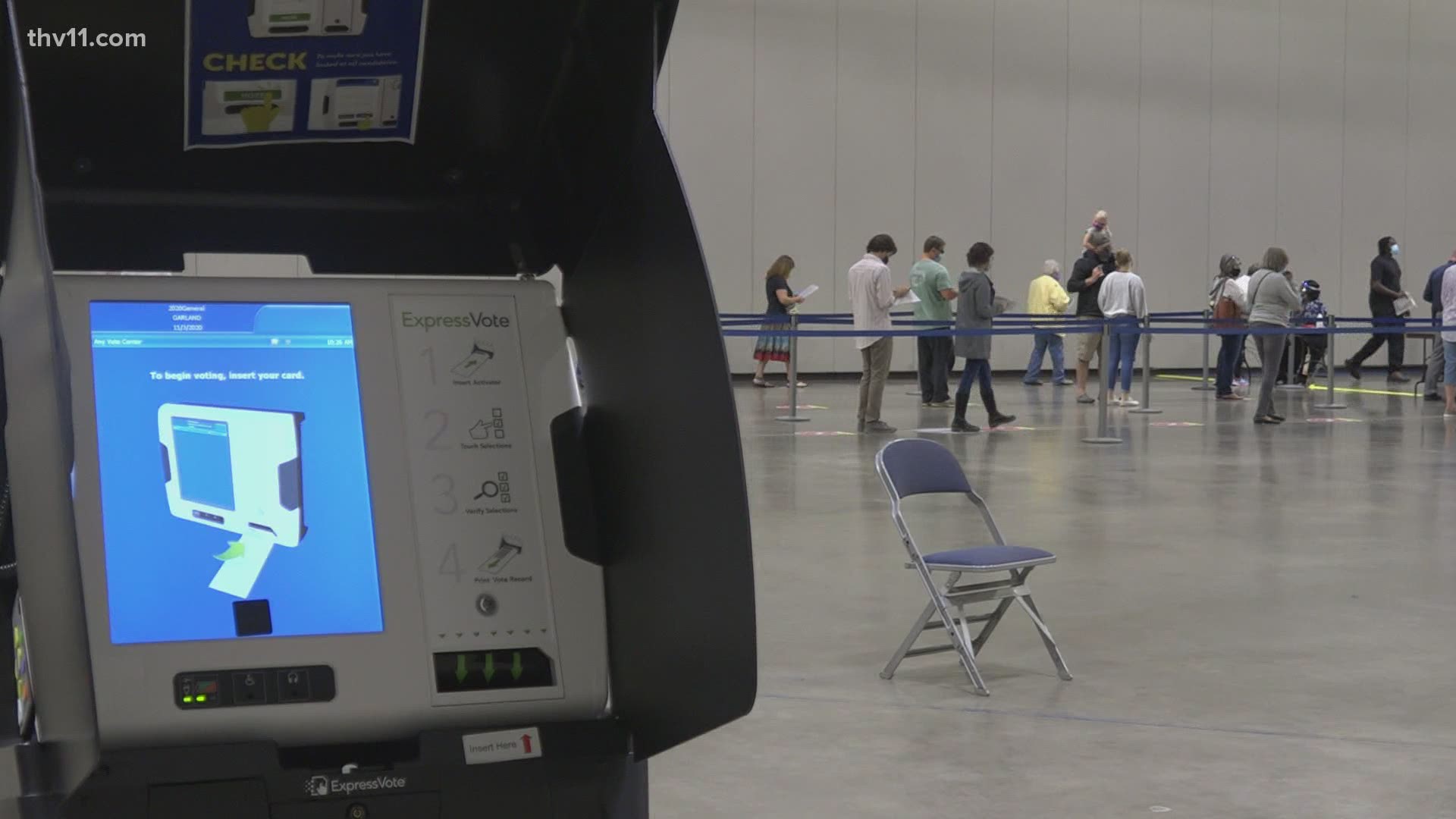 LITTLE ROCK, Ark. — America has held bitterly divided elections in the middle of wars and economic depressions, but holding one in the middle of a modern-day pandemic is obviously extraordinary.

The director of elections in Pulaski County wants to alleviate the fears.

"We're looking forward to it," said Bryan Poe, the man overseeing the implementation of new voting machines in the middle of the state's largest city in the middle of a global virus outbreak.

"We feel like this system is much better than what we've had in the past and it's going to be a lot more reliable."

The system begins by using Express Vote machines for the first time.

Pulaski County is catching up to the rest of the state where most other counties have already started using the touchscreens made by Election Systems and Software.

The system will get a baptism by fire in Little Rock and the surrounding suburbs. The machines are part of a closed system that takes the guesswork out of hand-marked paper ballots.

Precincts are off the grid and data is secured on portable memory sticks that look like thumb drives only with extra encryption. The scanner/ballot boxes require keys that are kept secure by precinct judges and opening them requires a process that resembles unlocking a military weapons system.

Plus, it doesn't take much to improve security over a paper ballot system that had been in place earlier this year.

"Just from soup to nuts, there's a great deal of security built into the system," Poe said.

While voting, scanning, and tabulating all stays away from open networks, the voter rolls are now digitized. That allows signatures to be checked and verified without having to vote at a home precinct. It also can flag anyone trying to vote more than once.

That credibly protects the system from hacking or old fashioned ballot-stuffing operations. But those are problems of the past. Election commissioners have to face the challenge of thousands of absentee ballots arriving in the mail.

"We are planning on bringing in 80-plus people and we're going to have them in the back of our building in a 9,000 square foot space," Poe said of the plans to "canvass" the mail-in votes, preparing them to be opened on Election Day.

Monday not only saw the start of early voting, but pairs of poll workers also began working their way through the ballots they have already received. One worker opens the outer envelope and removes the contents into three piles.

The other worker begins checking the voter I.D. form against identification on file. The same goes for signature checks. The still-sealed envelope with the ballot in it goes in a third pile.

The crews will work through ballots in a choreographed dance for two weeks. Any discrepancies will land a ballot into a provisional pile, not unlike how a person may vote if they forget an ID at the polls.

All the piles will be secured in boxes until they can legally be opened in the democratic version of Christmas morning.

"On election morning, we'll have those 80 people go through with their letter openers and open all the envelopes and all the ballots," Poe said.

The Christmas analogy continues when all of those now-opened ballots make their way to the county's new toy: the DS450 tabulation machine.

Poe says it costs $60,000 and the state helped the most populated counties procure them.

The machines can churn through about 3,000 ballots an hour. Poe says Pulaski County has received more than 20,000 absentee ballot requests.

As long as there isn't a late surge of more ballot requests, Poe thinks the machine can handle the volume and make reporting nearly final results possible on Election Night.

But that also assumes the machine works without hiccups. Poe has been through enough elections to know the hiccups will come, but he thinks timely results will be enough to forestall any doubts that would come from a delay in reporting.

Absentee ballots have to be postmarked by Election Day to be counted if they were mailed from within the US, a ballot sent from overseas military gets more time to arrive.

Every scanner/ballot box goes through an audit at the end of every day's use. Audits differ from recounts, which can only be called for by a campaign or individual. There are no automatic recounts in Arkansas.

The cost of the recount is borne by the one requesting it, unless it leads to a change in the outcome when the state picks up the tab.

The presidential election can never go into a runoff, but other general election contests could if no single candidate reaches 50 percent, plus one vote.

The most likely time that could happen this year could be in a multi-person mayoral or municipal election.

After wearing out the Christmas analogy, Poe is willing to talk sports. He describes his and his team's job as the groundskeepers for a contest that is way more than a game.

The judiciary serves as referees. Election officials just want to provide a fair playing field no matter what the partisans say when it's all over.

"We're more concerned with the process and making sure it's done correctly than we are with anything else," he said.